Samsung released two variations of the Gear S3 smartwatch to appeal to a greater niche of users. The Gear S3 Frontier, the outdoor version of its sleeker brother the Gear S3 Classic, is big. It is thicker and wider than its predecessor the Gear S2.

My reaction to smartwatches up until now has been they look like toys. I am the kind of person who buys smartphones in dark colors, keeps app use to a minimum, and prefers their screens to be bigger and wider. The Frontier may just be the look and size some people, like myself, have been waiting for.

It's the answer to my demographic of people who want an all-purpose watch that does the simple tasks competently.

With an iOS update last month, the Gear S3 Frontier is now compatible with all smartphones. And until new premium counterparts are launched later this year, this smartwatch is the best available in 2017.

Samsung marketed Frontier as the more rugged version of the Classic. The two biggest differences for the Frontier are minute marks on its rotating bezel, and the four protruding sides on its body for collision protection.

But the Frontier isn't too "rugged" looking, and the credit really goes to Samsung's standout bezel design. The minute marks on the bezel, though part of Samsung's intention to highlight its time measurement function for sports, actually accentuate the look of the Frontier as a "real" watch. Dozens of real watch designs such as a Rolex or the many knockoffs are even bigger and sport similar markings.

The Frontier is not just wider, but thicker than most smartwatches, and if you happen to have a slim wrist, you may find the thickness less than desirable. In the case you're after an elegant and slim smartwatch, go for the Gear S2, the rival LG Urbane, or the Gear S3 Classic, which looks more or less like its predecessor's bigger brother.

Durable and easy for fitness

Bigger screens have worked in the favour of smartphones, and few will complain about the bigger 1.3-inch AMOLED display on the Frontier. Along with the smoothly rotating bezel, access to apps or notifications takes a few seconds, and you can view them quickly -- including email, chat, and fitness trackers -- but there is essentially nothing new here.

To check how sturdy the Frontier is, I took the watch on a couple of jogs and for training at the gym. The watch is IP68 certified water-proof -- which is not completely water-proof, so don't dive into the tub with it -- but after a workout or jog, it allowed for easy cleaning of moisture and stayed shiny.

What was surprising was the ease of use of the two physical buttons on the right side. These are bigger than the Classic and have an alternative bump surface. I am an active strap and glove user in the gym and my gloves didn't get in the way of using the Frontier's buttons. The protruding bezel is also a great plus here, because Samsung has added music volume control for Bluetooth headphones with the Gear S3, and you can do so easily with gloves on.

The big size will also help hikers and skiers greatly who wear heavy sportswear and gloves, no matter your size. Pull the watch out from your heavy clothing and the big AMOLED screen greets you ready for use with its big protruding bezel and buttons.

With S Health, you can also check calories burnt, distance, heart rate, and repetitions for certain activities. Distance and calories burnt seem on point, as they both correctly boosted in line with my increased activity. Heart rate and rep counts I can't vouch for however -- does anybody trust them? But the sturdy and big design of the Frontier is the main reason I feel it's so fitness-friendly.

In South Korea at least, both Gear S3 models also come with a service that allows it to alert S-One, Samsung Electronics' sister firm that provides security services, in case of a hiker in need of rescuing, but I hope no consumer will need to find out for themselves how well this functions.

Despite battery life being touted as three days, I found it lasted somewhere between a day and a half and two days, depending on how well you use battery-conserving mode.

It's definitely longer than the single day for past models like the Gear S2, but if you are a constant checker of emails or have particular regular fitness routines, it will more likely last for two days. For drawn out sports activity such as marathons, I feel fully fitness-focused wristbands will serve the purpose better.

Power-saving mode and always-on-display features with the biggest battery (380 mAh) for a watch of its size make the Gear S3 one of the longest-lasting in its category. The bigger battery seems to be the main reason why the Frontier had to be thick as well as wide. But, if Samsung can find a way to maintain battery life and make the device thinner, it could possibly increase appeal for its successor.

Apps such as CNN and a wide variety of selections have been added, including a standalone game that I never had the inclination to try; smartphone games are way better anyway.

Clearly, Samsung is attempting to add more standalone features for the Frontier (LTE support) and a speaker for the use of S-Voice to leave audio memos. S-Voice will hopefully get a boost with the unveiling of new version courtesy of Vivo with the Galaxy S8. But more than gaming apps are needed to give smartwatches a clear purpose to take them from being the Luigi to smartphones' Mario. The Frontier doesn't reach that horizon.

The Gear S3 Frontier will be off-putting for many, I feel, due to its size. But for those who are looking for an all-purpose smartwatch that gets you through your daily life and work, with competent fitness abilities that look good whether you are in a suit or sportswear, the Frontier is the best watch for you.

At $349 (and a similar Korean price range) it is more expensive than most of its counterparts, but with great design and functionality, it's worth it if you are planning a year or more of use until the next version, or even the version after that. 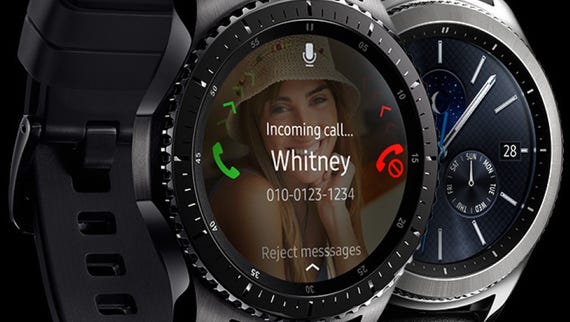