Samsung has released two new mid-tier members of the Galaxy family, the Galaxy E5 and Galaxy E7. The duo will make their debut in India alongside the full-metal-bodied Galaxy A3 and Galaxy A5.

The Galaxy E7, the larger of the pair, is a 5.5-inch Super AMOLED display device that will ship with Android KitKat with Samsung's Touchwiz UI - though according to Sam Mobile, it will be updated to Lollipop in the near future.

The Galaxy E7 has a 13-megapixel main camera and five-megapixel rear camera loaded up with lots of selfie features, including wide-angle shots up to 120 degrees, voice commands, palm gestures, and Samsung's post-shot touch-up features. 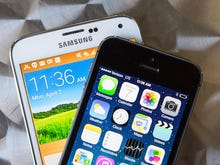 Other specs include 16GB onboard storage with microSD support up to 64GB, 2GB RAM, a 2950mAh battery, and Bluetooth 4.0 connectivity.

It's powered by a 1.2GHz quad core processor but, unlike Samsung's higher end devices, the E7 doesn't have LTE support and, unlike its lower end devices, doesn't appear to have dual SIM support either.

The Galaxy E5 has a five-inch display and shares the same processor, storage, and RAM specifications as the E7 but has a smaller eight-megapixel rear camera and five-megapixel front camera as well as a lower capacity 2400mAH battery.

Samsung is doubling down on India with the two new smartphones, as the company is facing stiff competition from local rivals that threaten its dominance in the country's fast growing smartphone market.

Samsung unveiled the devices alongside its launch in India of the Galaxy A5 and Galaxy A3, which it started shipping in some markets in the last quarter of 2014. Those devices were Samsung's first stab at producing handsets with a full metal unibody and have similar specifications to the E5 and E7, however also include LTE Category 4 support.

The four new devices for the Indian market are priced well above recently launched devices aimed at first time smartphone buyers in the country, such as Micromax's new Yureka, which costs Rs 9000 ($140) and ships with CyanogenMod. Samsung will also be contending with new low-priced entrants such as China's Xiaomi and soon may have Asus' new dual-SIM ZenFone2 snapping at its heels.

India was the fastest growing smartphone market in the Asia Pacific region last quarter and, according to IDC, while Samsung still holds a dominant 24 percent share, its growth is not keeping pace with the likes of Karbonn, Lava, and Micromax.