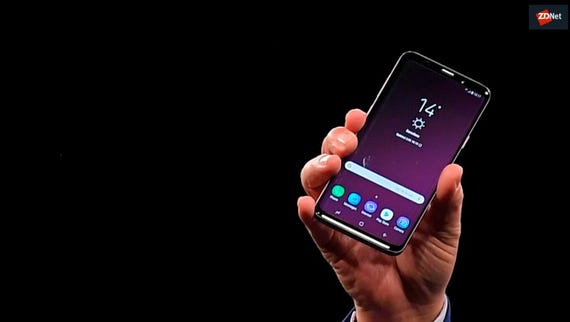 Video: 10 reasons why Samsung Galaxy S9 Plus is the best phone for the enterprise

Statistics from Ookla, the company behind the internet performance site Speedtest, found the Galaxy S9 smartphone's family has download speeds that are up to 42 percent faster than the closest competitor's newest devices.

In my own informal tests, comparing my Pixel 2 with a friend's Galaxy S9 on Speedtest over the Asheville, N.C.-area Verizon network, I found the Galaxy S9 came in with 12-percent higher download scores. The speed increase is real.

What powers this speed increase is Samsung's Cat.18 LTE modem, a chip that launched in 2017. It's part of the ARM-based Exynos 9 Series (8895) system-on-a-chip family. It gets it speed from industry-first 6CA (carrier aggregation) support.

With 6CA, the Cat.18 modem can aggregate up to six Component Carriers. This -- combined with 4x4 multiple input, multiple output (MIMO), and 256 quadrature amplitude modulation (QAM) -- means, with the right network and conditions, a Galaxy S9 could theoretically hit 1.2Gb downlink speeds. While you're never likely to see speeds like that, you will see considerable improvements over the competition's speed with similar conditions.

The Cat.18 also supports Licensed-Assisted Access (LTE-U). That enables devices to aggregation licensed and unlicensed spectra for even higher speeds. LTE-U is part of 5G, which is being rolled out by T-Mobile and Verizon. It's also present in other phones using the Qualcomm's X16 LTE modem such as the LG V20 and Pixel.

Behind all this technology, Samsung is hoping to find new customers for its flagship smartphones as the summer vacation season starts. Justin Denison, Samsung Electronics America's senior vice president of mobile product strategy and marketing, said in a statement, "This summer, consumers are going to be on the road, at the beach, and relying on their phones more than ever, but without the latest and fastest network technology that's available in the Galaxy S9 and S9 Plus, their phones may quite literally slow them down."

Samsung may be on to something. According to a Samsung survey conducted by Wakefield Research in May 2018, "This summer, speed is a must. More than 4-in-5 (85 percent) Memorial Day weekend travelers say it's important to have shows, videos, or movies to watch while they are traveling to their destination."

The Galaxy S9 smartphones, as ZDNet has found, are also darn good smartphones. While Google's Pixel 2 is still my favorite phone, I must admit the speeds Samsung achieves with today's 4G network is very impressive.

Join Discussion for: ​Samsung S9: The fastest smartphone of them...