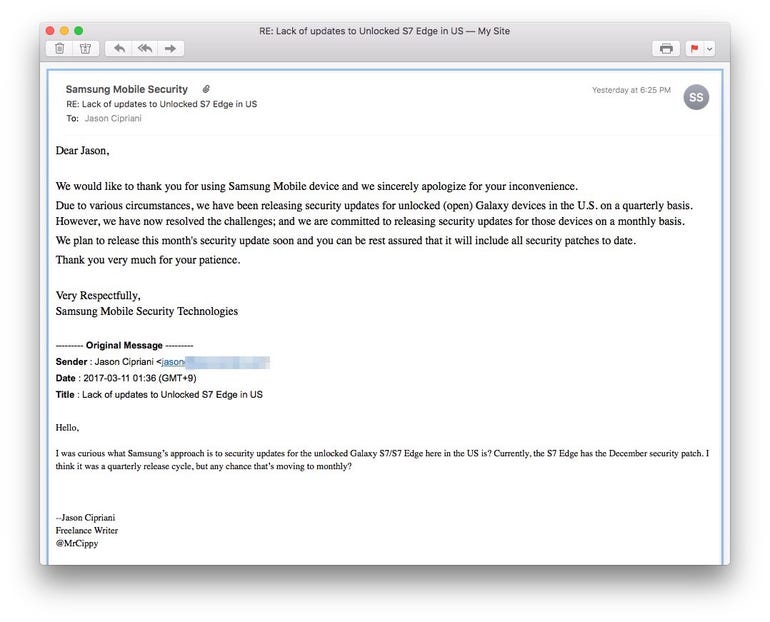 According to Samsung Mobile Security, the company has worked through "challenges" and will begin releasing monthly security updates for unlocked Galaxy smartphones in the US.

It's beginning to feel like this is one secret Samsung just doesn't want to keep.

Last week, I opined that Samsung's approach to unlocked devices was completely wrong. The lack of timely updates is typically a selling point of unlocked, carrier-free smartphones. And yet, the S7 and S7 Edge were last updated in December, while every major US carrier has released Android 7.0 Nougat for their respective S7 models.

It's often felt as if Samsung had all but forgotten about its unlocked Galaxy S7 and S7 Edge users.

A few days after my article was published, a reader sent me a screenshot of his conversation with the Samsung Mobile Security team that claimed the company was moving to monthly updates.

I sent an inquiry of my own, and received an identical response:

Furthermore, the email states the company will release the March security update "soon." It's unclear if that update will include Nougat, but there's no reason to believe otherwise.

With the announcement of the Samsung Galaxy S8 nearing, and an unlocked variant of the upcoming smartphone having just passed FCC certification, the company's commitment to monthly security updates for its unlocked devices is a pleasant surprise.

I reached out to Samsung PR to see if they can provide any more details about the new approach, and what the challenges were. I will update this post if I receive a response.

Samsung's Galaxy S8 might have a button for its new AI assistant:

Join Discussion for: Samsung commits to monthly updates for unlocked...