At first glance, the Samsung slate Microsoft gave attendees at its BUILD conference is a black version of its Series 7 device. Under the covers, however, it's been packed with sensors, aiming to give developers access to the technologies that they're going to be using to build Windows 8 applications.
Written by First Take , Previews blog log-in on Sept. 19, 2011

At first glance, the Samsung slate Microsoft gave attendees at its BUILD conference is a black version of its Series 7 device. Under the covers, however, it's been packed with sensors, aiming to give developers access to the technologies that they're going to be using to build Windows 8 applications.

The tablet itself is a low-power Core i5 system with 4GB of RAM and a 64GB SSD. Microsoft has imaged it with a developer build of Windows 8 that includes a series of sample Metro-style applications and preview versions of the next generation of Visual Studio tools, along with a cross-platform version of its Expression Blend design tool. It's clear that this is an early version of the OS, and at this point it's not suitable for day-to-day operation. There are some power-management issues, probably driver based, as the fans do operate more than we'd expect — and we've seen similar fan behaviour on other devices running the developer preview.

This is a Sandy Bridge system, but there's no USB 3.0 support. That shouldn't be a problem (unless of course you're hoping to experiment with Windows 8's native USB 3.0 drivers), as you get a single USB 2.0 port along with Micro SD and micro HDMI ports. A power button on the right is a little too close to the rotate lock button, with volume controls on the right. A single Windows button on the front drops you back to the Windows 8 start screen. The case is the same aluminium alloy as the Series 9 ultralight notebook, with a relatively small bezel around the 1,366-by-768 screen. You get plenty of connectivity, as there's 802.11b/g/n Wi-Fi and a 3G modem.

As this is a developer system, Microsoft has also bundled a Bluetooth keyboard and a docking station. There's no mouse, as you're expected to use either touch or a Wacom pen to interact with the screen. Touch resolution is good (made better by Windows 8's support for fuzzy hit targeting), but for fine positioning there's really no substitute for a pen or a mouse. The Samsung docking station adds additional USB ports and Ethernet, as well as a full-size HDMI port.

Open Device Manager and you'll quickly see just how many devices Microsoft and Samsung have packed into the slim slate. Along with the usual accelerometer, there's GPS and a magnetometer for precise positioning. One of Windows 8's new APIs brings the three sensors together, so there's only one call to get device location, orientation and motion data — making it a lot easier for developers to write applications that require precise positioning information. With Windows 8 supporting ARM and other SoC tablet devices, tools like this will simplify development of augmented reality tools and services. Front and rear cameras will also help AR developers. 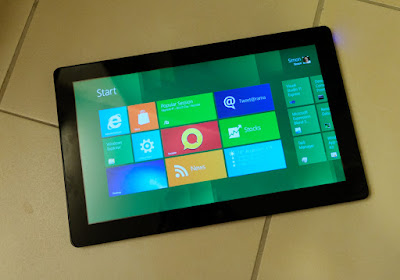 The Windows 8 Developer Tablet follows on from the Asus device that Microsoft released to developers working with Windows 7. It's a modification of shipping hardware that's been developed in conjunction with a major OEM that lets Microsoft showcase the capabilities of a new operating system, while encouraging developers to make the most of its new features. Judged on that basis, the tablet is most assuredly a success, as developers are already using the devices to build their first Metro-style applications.