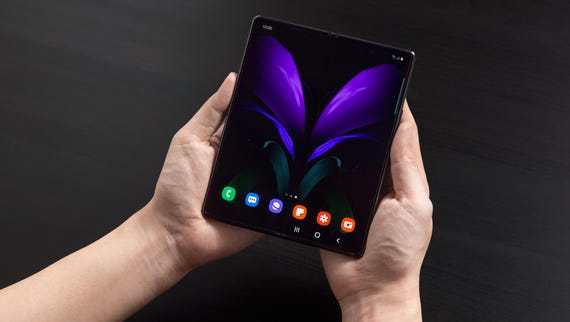 A look at the Samsung Galaxy Z Fold 2
Watch Now

Samsung has unveiled the Galaxy A42 5G, which becomes the new entry-level 5G A-series Galaxy phone that will be available in the UK for £349 ($454) on November 6.

The Galaxy A42 5G features a 6.6-inch AMOLED display with a pinhole cutout for the 20-megapixel (MP) front-facing camera. On the rear, like other mid-range A-series phones, it has a four-camera setup that consists of 48MP main camera, 8MP ultra wide camera, a 5MP macro camera, and 5MP depth camera.

The device is powered by Qualcomm's 7-series Snapdragon 750G 5G (SM7225) processor, which consists of a 2.2GHz two-core processor and a 1.8GHz six-core processor. Qualcomm announced the 750 5G last month.

On the memory side, the Galaxy A42 5G has 4GB or memory and 128GB of storage space with a microSD that supports up to 1TB of additional storage. The battery has a 5000mAh capacity and supports 15W fast charging, but no wireless charging or water resistance.

There's also an on-screen fingerprint sensor. The phone is available in black, white and grey.

Consumers will be comparing the Galaxy A42 with OnePlus's aggressively priced mid-range OnePlus Nord, a 5G handset launched in Europe and the UK this July but which hasn't been released in the US.

According to a report last month from Android Central, OnePlus will instead launch the Nord N10 5G in the US later this year for under $400. It will reportedly run on a Snapdragon 690 processor.

Join Discussion for: Samsung's new Galaxy A42: This phone brings...