As far-fetched as it may seem, the startup recently demonstrated that it's possible -- and costs significantly less than studio apartment in San Francisco.

For a little over $10,000, Apis Cor in partnership with Russian developer PIK was able print out a 38sqm house at its test facility in the town of Stupino in Russia.

Apis Cor's 3D printer processed layer after layer of concrete mixture -- which the company claims can last for 175 years -- to form the walls of the small house.

"For the first time in the Russian construction practice a house was printed as a whole, rather than assembled from pre-printed panels," Apis Cors stated in a blog post.

However, once the walls were printed and the 3D printer was removed by a crane manipulator, a group of contractors had to install insulation, windows, appliances, and a roof.

Apis Cor admitted the design of the house is "unusual" but said it was deliberate to showcase the flexibility of the equipment.

"The house can be of any shape, including the familiar square shape, because the additive technology has no restrictions on design of new buildings, except for the laws of physics," the startup stated in its blog post.

Apis Cor said that it can build and furnish these small houses for $10,000, with the windows and doors being most expensive component of the build. The price of the windows and doors came in at $3,548, while the foundation, walls, and floor and roof cost $277, $1,624, and $2,434, respectively.

The startup believes these houses could be used to re-house those affected by natural disasters.

With the cost of housing constantly a subject of debate in cities like San Francisco and Sydney, Apis Cor's solution could also pave the way to more affordable living, the startup said.

3D printers have also been used to print body parts. In February, the Commonwealth Scientific and Industrial Research Organisation and Melbourne, Australia-based medical implant company Anatomics teamed up with doctors in the UK to implant a 3D-printed titanium and polymer sternum into a 61-year-old British patient.

The operation is the latest success story for the CSIRO-Anatomics partnership, after a 54-year-old cancer patient from Spain received a 3D-printed titanium sternum and rib implant in September 2015, designed and manufactured out of Lab22. 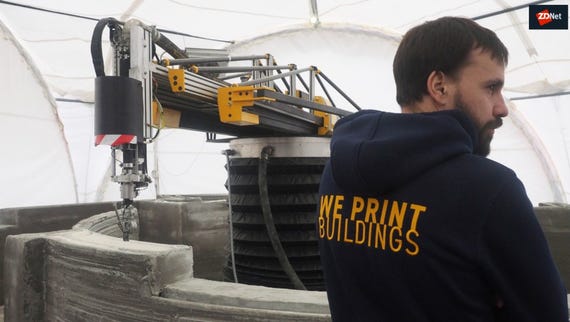