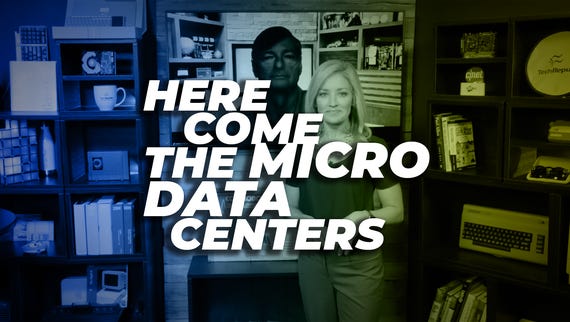 Touring one of Interxion's cloud facilities in southern France shows how serious the industry has become. Meticulous security is in evidence everywhere, with many multiple layers of physical and virtual protection. Ruthless efficiency in design and construction abound in carefully laid out network cabling, battery rooms, and fire protection systems.

So too in ready abundance are the three strategic assets that fuel today's growing digital workloads in the cloud: Physical space, power, and networking capacity.

Long one of the leading regional players in Europe, the cloud hosting firm Interxion has been playing a careful game of strategy when it comes to the real chess pieces of the future of network computing: Servers come and go on an endless upgrade/replacement cycle. Power gets steadily greener, cheaper, and more efficient, often from the supplier of the week, or soon, the hour. Even physical space is easily commoditized now as Moore's law continues its endless grind to put the same performance in a much smaller space.

However, Interxion has uncovered perhaps the discriminating advantage. It's one that contrasts with the supposedly generic, borderless, one-size-fit-all nature of cloud computing that proponents have long argued for: Namely that location actually does matter. And not just a little bit.

When it comes to modern computing today -- this means connected services ranging from web apps and enterprise IT to streaming video and online gaming -- it's the network that makes up the internet itself that's actually the arbiter of what is truly possible. Almost everything else is largely in the hands of the datacenter designer and operator, but in practice tends to be tactical in nature.

I've used Interxion as a poster child in the past for an emerging digital ecological niche in neutral multicloud. Certainly many of the large public cloud providers use their co-location services for reasons that will become evident. In fact, hyperscale cloud operators are now the largest consumers of co-location services.

That's because, due to its various financial and operational advantages, the cloud industry has become a veritable powerbroker when it come to the future prospects of digital companies that can use its services to effortlessly scale new businesses and create vast fortunes as a result. The now famous story of WhatsApp, which sold to Facebook for $19 billion, yet needed only 50 employees to support its 900 million users at the time, is the textbook example of how the cloud can make this happen. It underscores the vast business potential of the cloud, provided that one can actually take advantage of it.

This is the key point then: The cloud isn't actually generic or borderless at all. Its constrained to a surprising degree by geography, the speed of light, and what your local cloud provider can actually provide in terms of services. Those that use cloud computing services are well familiar with its painstakingly chosen regions and availability zones, for example.

In short, where your network goes and where it comes from matters. It matters for performance, it matters for scale, it matters for round-the-clock operational reasons, and it makes a difference for the legal and regulatory jurisdictions that cloud services can typically pass through relatively unimpeded.

Today's global internet services require vast reach, high performance, and sophisticated capabilities at a commodity price point, something that a limited number of providers can offer in reality. Compromises are increasingly not tolerated by end customers, who can readily switch when the pain gets high enough. Those using enterprise video conferencing or watching a streaming sporting event can and do access such services from anywhere in the world. They expect an increasingly high bar for features, availability, and performance.

All of this has created a growing market for second-tier but sophisticated cloud providers that understand future growth patterns and market shifts, and can then plan their access and capacity well ahead of time to take advantage of them. They can then beat the bigger players at their own game through a better regional planning lens combined with local industry relationships.

The Scarcest Cloud Resource is the Most Valuable

For my latest tour of a multicloud datacenter, I visited Interxion's Marseille facility, which is uniquely positioned on the crossroads of the undersea cables that actually make the global Internet work.

It's the highly discerning positioning of this facility that Interxion believes will provide long term competitive advantage. That's because the lion's share of internet growth in the 21st century will actually be in Asia and Africa, Interxion's managing director for France, Fabrice Coquio, observed to me when I spoke with him about their network strategy.

The Marseille data center is at the nexus of three great continents, with their latest undersea cable interconnection offering dramatically lower latency connectivity between Europe, Africa, and Asia. Coquio noted that "our role is to be the right location so that our customers have the best choice. Our job is to offer America, the Chinese, and European players to relocate their data center investments to the best place, and after that we are neutral."

In this way, Interxion is turning the region into a digital content capital -- from enterprise apps and media streaming to cryptocurrency mining and online gambling -- that can also offer the likes of Amazon, Facebook, Google, and Microsoft an irresistible, as well as very hard to duplicate, advantage. That's because the laying of undersea internet cables tends to be highly fraught with physical, political, and regulatory hurdles. This strategy allows players like Interxion to essentially become the Switzerland of cloud, and succeeding no matter who ultimately wins in the cloud wars.

While some will observe that co-location is only a subset of the public cloud market, it's arguably one of the larger components. Though cloud computing of every flavor will be an estimated $623 billion industry by 2023, the co-location industry will be a $51 billion subset of that, and growing at only a little less than the same overall rate.

And in this case, when you're trying to attract the likes of the big tech giants and their commercial clouds as customers, you need to directly support their finely tuned and highly customized server hardware, which is designed to run down to the last watt with maximum efficiency. Co-location means that when you have the best overall position on the network, you can sell network capacity and its location as a competitive advantage to the biggest buyers, and they can onboard their whole cloud stacks, down to the metal, very quickly.

Thus, in combination with all the usual trappings of cloud providers, from high security to extremely efficient power utilization, companies like Interxion can sell much harder to obtain resources, like strategic network access combined with an almost extreme sense of neutrality.

As Coquio told me, "we are very reluctant to do anything that looks like competition with our customers. Thus we can work with with Google or with Facebook just as easily." This has translated into tangible business result, he says, "by remaining very neutral in all aspects, not just in speech, but in action, we've been able to deliver growth." This has resulted in 49 consecutive quarters of growth of over 12%, an enviable rate even for the tech industry.

Their success story in capturing hard-to-recreate assets in the cloud computing race continues, which is key to a scarce resource strategy. This includes a new data center next to their existing one in Marseille that is being built inside a World War II German submarine bunker (video tour forthcoming), that will further reduce costs yet provide even more access to what they can uniquely provide.

Demand Strategy Key to Success in Tier 2 and 3 Providers

All of this shows that despite the vast and widely discussed dominance of the Tier 1 cloud providers, there is still a large pie that can be carved from the overall cloud industry growth stories that can still be captured by Tier 2 and 3 cloud providers. But only if they think innovatively, strategically capture hard to recreate network resources (bandwidth and inexpensive power/cooling), and offer compelling value propositions across their entire offering with a long-term focus on what the future holds.

In this case, Interxion offers a best-in-class access to key new markets (Africa and Asia) directly and safely from Europe, allowing major cloud providers special access to the largest growth areas in the cloud for the 21st century, yet still avoid most of the entanglements of actually operating physical equipment in different geographies where they will likely have far less control, lower quality of service, and more uncertain legal and regulatory operating environments.

In my analysis, the strategic wielding of hard-to-recreate resources is a key blueprint for how regional cloud providers can not just survive but sustain and grow despite the otherwise tremendous winner-take-all effect of the wider cloud market. It's also a strategy for enterprise IT to succeed long term, by seizing differentiators like this. By thinking long term, those that seek out and deliver high quality niches in the cloud is an approach that offers some of the best future potential for the rest of us when it comes to finding remaining whitespace in an increasingly commercial and hypercompetitive global internet services market.

Join Discussion for: Seeking strategic niches in the cloud