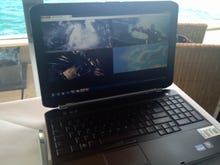 Vodafone puts 4G through its paces While tests of the Vodafone 4G network today show it stands well above Telstra and Optus right now, the company is putting it through its paces to ensure it can keep getting super-fast speeds when customers get their chance to join in June.

The company, which launched its LTE network late last year, says it expects to hit 40 percent population coverage by the end of this year, with 4G offered in 1,200 towns.

SFR's business 4G packages for smartphones start at €36 per month for 4GB of data over a 3G month contract, up to €51 for a 4GB allowance on a 12-month contract.

For tablets, the lower end of SFR's offerings is a €27 per month plan with 4GB of data for 12 months, and tops out at €47 per month over 12 months for 8GB of mobile data.

Alongside 4G, SFR is rolling out DC-HSPA+, an evolution of 3G that brings theortecial download speeds of 42Mbps. It expects to have 70 percent covered by either its LTE, which has a theoretical top speed of 114Mbps, or DC-HSPA+ network by the close of 2013.

Bouygues Telecom joined the 4G race among France's mobile operators earlier this month, and had 63 percent coverage by population when it launched its network last week.

SFR and Bougyes announced earlier this year they had begun talks on sharing their respective 4G networks.

Join Discussion for: SFR switches on 4G for three new cities in...