Full Bio
Posted in Between the Lines on September 17, 2018 | Topic: Innovation 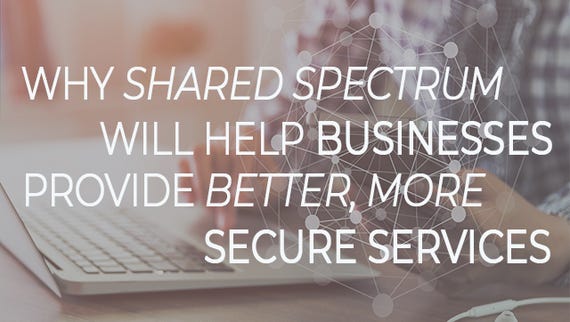 At Mobile World Congress Americas last week, the message was clear: If the US is going to lead in 5G deployments, it needs the government's help in some crucial areas -- like freeing up spectrum.

"We can't afford to lose this race," Meredith Attwell Baker, president of the CTIA, the US wireless communications trade group, said in a keynote address at MWCA in Los Angeles. "And it starts with spectrum. To unlock the full potential [of 5G], we need hundreds of megahertz of new spectrum."

Also: 5G: Everything you need to know about the new wireless revolution

The government is poised to make real progress on this front with the advancement of the Citizens Broadband Radio Service (CBRS).

Traditionally, the Federal Communications Commission (FCC) auctions off exclusive licenses for spectrum, while wi-fi services sit on unlicensed spectrum. The CBRS, meanwhile, is shared spectrum - specifically, the FCC is opening up 150 MHz on the 3.5 GHz band for the CBRS, which will include some licensed users as well as general access users.

For businesses that want to take advantage of what 5G can offer - such as expanded connectivity in a retail setting, or the capability to widely deploy industrial IOT devices - the CBRS is a big step up from the service they'd get via wi-fi. While wi-fi deployments are subject to interference, CBRS-certified radios can offer enterprises the ability to set up private LTE networks.

CBRS "gives us the opportunity to have the innovation of unlicensed [spectrum] with the security and quality of service that you're used to finding with licensed spectrum," Derek Peterson, Boingo Wireless CTO and CBRS Alliance member, told ZDNet.

For instance, Peterson explained, a retailer may want to set up a secure connection for point-of-sale devices. Currently, enterprises typically use wi-fi for this kind of deployment.

"Unfortunately, it's the same network as everything else, and you end up with a 'Target' situation," Peterson said, referencing the massive 2013 hack into Target's POS systems.

Spectrum on the 3.5 band will be managed using a novel approach: Users will get priority to it through a three-tiered system. The first tier of users includes incumbent users - namely, the Navy. The 3.5 band was previously allocated to the government, but it went largely unused - which is why it's being tapped for the CBRS. While the Navy doesn't use it that much, the government wants to ensure it gets first priority to use it.

Also: 5G super speeds are coming. Here's what they'll be like CNET

The second tier of users will be those who hold Priority Access Licenses (PALs). Lastly, the third tier will be allocated to General Availability Access (GAA).

Spectrum use will be managed via a Spectrum Access System (SAS), which maintains a database with information like users' tier status and their geographical location.

In just the past few weeks, the FCC started approving Initial Commercial Deployments (ICDs) on the general-access third tier. Boingo and others in the industry have started using these, Peterson said, with many more deployments expected to come in the next few months. Hopefully by June of next year, he said, most of the new handsets will support this spectrum.

To move forward with CBRS, the FCC now has four more steps to complete: First, the agency has to approve ICDs - a process currently under way. Next, it has to ensure the Spectrum Access System is working correctly.

In addition, the FCC is working with the Defense Department and companies like Google to ensure that the incumbent players will always have priority on the 3.5 band. They're testing what's called Environmental Sensing Capability (ESC) by putting antennas up along the coast. Those antennas are searching for radar to send back to the Spectrum Access System.

Finally, the FCC has to approve the rules governing the CBRS. For instance, the agency plans on allocating 70 MHz of spectrum to PALs, granting licenses for 10 MHz a piece for three years. There's a lot of contention around that plan, Peterson said, with some in the industry saying three years isn't long enough.

Another point of contention is the size of the geographic zones covered by a license. Some would prefer licenses to cover areas designated by Census tracts - this could, for instance, result in a license covering the entire LA Basin. Others, meanwhile, want to see licenses that cover specific economic areas - such as downtown LA, rather than the entire Basin.

All of these steps will hopefully be finalized by the end of the year, Peterson said, Spectrum Access Systems can be deployed, and Priority Access Licenses can be auctioned off.

From there, the hope is to see this model adopted across many different spectrums, particularly the lightly-used ones. "This is an opportunity to move forward in spectrum management across the globe," Peterson said.

Join Discussion for: Shared spectrum: What's next and why it matters...