You can try to turn Windows 10's data-sharing ways off, but, bad news: Windows 10 will keep sharing some of your data with Microsoft anyway.

There is an alternative: Desktop Linux.

You can do a lot to keep Windows 10 from blabbing, but you can't always stop it from talking. Cortana, Windows 10's voice activated assistant, for example, will share some data with Microsoft, even when it's disabled. That data includes a persistent computer ID to identify your PC to Microsoft.

If you do use Cortana, you'll be sharing your keystrokes and voice with Microsoft. That's to make Cortana and other Microsoft applications work better; but if privacy is your first concern, just forget about using Cortana.

For Windows 10 to really show off its stuff it must share your data with the cloud. For example, not only is Cortana useful as an assistant -- in the way Apple's Siri and OK Google are -- but it also supplies the data for Microsoft's software-as-a-service (SaaS), business intelligence (BI) program the Cortana Analytics Suite.

So if your company plans on using Cortana to its best advantage, not only will all your keystroke, voice, and Edge and Bing data be collected, everyone else's data will be collected. That's great for big-data BI, but it may not suit you.

So, what can you do? Well, you can't go to Android, Chromebooks, iOS, or Mac OS X. All of them, to one degree or another, also share your data with their parent companies.

It's worth noting that Android and ChromeOS are both based on Linux, while Mac OS X traces its roots to BSD Unix. In all these cases, just like Windows 10, their vendors have decided that the cloud is where the future lies.

You know all that stuff you've heard about how all of IT was going to the cloud? Guess what: That's already happened for most major data center and server operations and now it's come for the desktop. 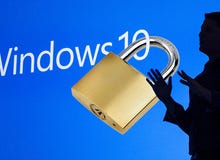 ​How to secure Windows 10: The paranoid's guide

Worried sick over Windows 10's privacy settings? There's a lot you can do to lock them down, but you will lose some functionality along the way.

So, if that gives you a privacy panic attack, you can either stick with your old operating system, which is likely Windows 7, or move to Linux. Eventually, when Windows 7 is no longer supported, if you want privacy you'll have no other viable choice but Linux.

There are other, more obscure desktop operating systems that are also desktop-based and private. These include the BSD Unix family such as FreeBSD, PCBSD, and NetBSD and eComStation, OS/2 for the 21st century. Your best choice, though, is a desktop-based Linux with a low learning curve.

For Windows users, I think Linux Mint 17.2 with the Cinnamon interface is your best choice.

Mint already looks and works a lot like Windows XP/7, so you've got nothing to be afraid of. Modern Linux doesn't require you to be a shell power-user to use it anymore than you need to be an expert PowerShell developer to use Windows.

No doubt, you have other concerns about moving to Linux. Let's go over them.

First, installing Mint is simple. You download the latest version of the operating system. Then, you put its ISO image on a USB stick using Pendrive Linux Universal USB Installer. You can also use the USB stick to try Mint without installing it. Just boot up from the USB stick and you'll get a good, albeit slow, look at Mint.

If you like what you see, double-click on the install Mint icon and you'll be on your way. If you want to keep Windows on your system, select Install Linux Mint alongside Windows for your installation and you'll be able to dual boot them. Your only real decision will be to how much disk room you'll want to give Mint. Mint will run in as little as 8GBs, but I usually give it at least half the disk space on dual-boot systems.

You can also always just buy a PC with Mint already to go. Vendors with Mint systems include FitPC and ZaReason.

Next, you'll want software. You should know that many popular Windows programs -- such as Outlook, Quicken, Microsoft Office and Internet Explorer -- won't work on Linux. Fortunately, there are many good free replacements for them such as Evolution, GnuCash, LibreOffice, and Google Chrome or Firefox.

Mint, like most Linux distributions, comes with many of these programs pre-installed. If you want to install another program, it's as easy using Mint's Software Manager. You just login, pick the program, say yes to install, and you're on your way.

If you must have a Windows program, you can run some of them, such as Office 365, from the cloud. Of course, then you're heading back into cloud and privacy issues again. Also, you can install many Windows programs on Linux with CodeWeavers' Crossover or run an instance of Windows in a Linux virtual machine using Oracle VirtualBox. In short, you can use your Windows apps and have Linux too.

How to install Windows apps on Linux with... SEE FULL GALLERY

One program you won't need to install is an anti-virus program. While Linux doesn't have perfect security--nothing does--for all practical purposes there are no desktop Linux viruses.

Need support for Linux? There's corporate support from companies such as Pantek. You can also get free support from the Linux Mint forums or general support sites such as LinuxQuestions.

That's pretty much all there is to it. You'll find that both Mint and its applications look and work pretty much like Windows XP/7. With a conventional Linux desktop, unlike most other "modern" operating systems such as Windows 10, you're not going to be sharing your secrets with their vendors.