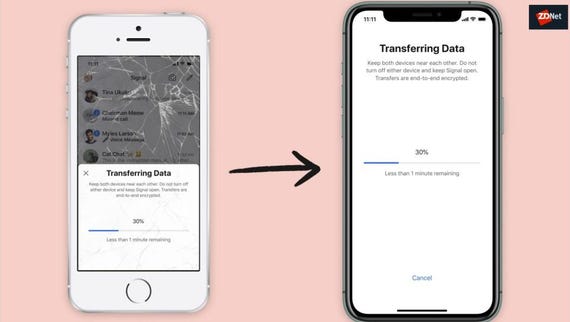 Signal announced on Tuesday it has developed the ability for iOS users to transfer the secure messaging app's information from an existing iOS device to a new one.

"Signal generates a unique keypair for the encrypted device-to-device connection, and a MAC is embedded in the new device's QR code so your existing device can verify the connection," the company said.

"The QR code itself does not include any sensitive information. If someone else is in the same room and dives across the table or races to scan it first, the worst-case scenario is that they could start transferring their data to the new device before you."

In such cases, Signal said the app could be reinstalled and the process restarted.

The company added that this was the first time moving to a new iOS device has been possible without losing any data. Android users have been able to move message history between devices, so long as they are able to shift a backup file between devices and enter a 30-digit passphrase for the backup.

"The notion of a 'file system' remains a foreign concept to many iOS users, and Apple's 'Files' app is relatively new and isn't available on some of the devices that we still support," the company said.

"We recognise that this feature doesn't cover every single scenario, but we think it's a good start. We plan on continuing to make improvements to this functionality in the future."

Last month, Signal unveiled its PIN feature, which is part of the company's move away from using phone numbers as profile identifiers.

The PIN is used to encrypt profile information, account settings, and local contacts, with a copy of the data stored on Signal's servers. The PIN does not cover messages, which remain on devices.

Much like its 30-digit passcode for Android backups, if a user forgets their PIN, backups cannot be recovered.