I came across something else that happened while I was away the past few weeks, and is worth mentioning. SimplyMEPIS 11.0.12 was released at the beginning of February. If you are not familiar with SimplyMEPIS, it is based on Debian Stable (Squeeze), with a KDE desktop and a lot of packages added to the base distribution, a good bit of polishing done on it, and some very nice Mepis-specific utilities added. I have downloaded and installed the new release on several of my systems, and it looks quite good. 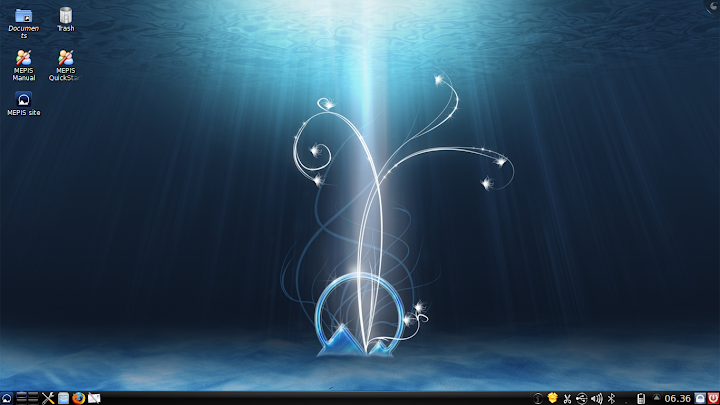 The ISO image (available for 32- and 64-bit architecture) is compatible with the unetbootin utility, so it can be easily converted to a bootable USB memory stick. The installation process is fairly easy, but the sequence is a bit unusual compared to most other distributions. It asks for an absolute minimum amount of information (basically the language and disk partition), and then immediately copies the image to disk. It doesn't get around to asking about the keyboard layout until almost at the end, so if you are using a non-U.S. keyboard beware, when you are answering the installation questions the keyboard layout will be wrong. For example, on my Swiss keyboard the "-" is located where the "/" is on a U.S. keyboard, so when I intend to give the system name as "NF310-Mepis", if I forget about the keyboard, and I don't pay attention to the input I actually call it "NF310/Mepis", which is accepted by the installer but drives the boot/startup process crazy. Not a pleasant situation, and I can tell you that I have made that mistake more than once (I never said I wasn't a slow learner). On top of that, when it finally does get around to asking for the keyboard layout, Swiss German is not one of the available choices at this point. I think Swiss French is, but I don't recall for sure - all I do is ignore the question and leave it until I have booted the installed image then I can change the keyboard to Swiss German in the System Settings. There is a small problem with this, because if I go to a console terminal login (Ctl-Alt-Fx) the keymap is still wrong, but I don't do that very often, and I can live with it.

Because SimplyMEPIS stays very close to Debian Stable on the core packages, it is actually well behind most of the popular distributions. A copule of obvious examples: the Linux kernel is 2.6.26 rather than the 3.0/3.1/3.2 that is common today, and the X display server, which is 1.7.7 rather than the more common 1.10 or later. The X server actually caused me a problem, because when I installed the new release on my Aspire One 522 it came up with the display at 800x600 rather than 1024x600. It took some digging around before I realized that the problem was that the FOSS radeon driver was an older version which did not recognize the AMD/ATI 6290 display adapter, so it was defaulting back to the old VESA driver. I thought that I might get around this problem by installing the proprietary fglrx driver, but when I did that via the synaptic package manager, I found that it was also so old that it didn't recognize the Radeon 6290, and it still fell back to the VESA driver.

At this point I changed course and loaded the new distribution on my Samsung NF-310, which has an Intel CPU and graphic chip. That installation was no problem and everything came up just fine, including the screen (1366x768), wireless networking (and wired, duh), and all the rest of the hardware.

I think that pretty well summarizes the situation with SimplyMEPIS. If it works for you, on your hardware, it is very good, very stable and very well supported in the MEPIS user forums. But if you have some of the newest hardware, such as the latest graphic controllers and wireless networking adapters, you are likely to find that SimplyMEPIS doesn't "yet" have the necessary drivers. Of course, all of this could be fixed by adding or updating various packages, or in some cases by updating to a newer Linux kernel. But by the time I put that much effort into it I might as well just choose a different distribution which has all of that done already anyway.

As I sit here thinking "ok, when would I recommend SimplyMEPIS, or to whom would I recommend it?", I think the best answer is that if you were considering using Debian Squeeze anyway, I would probably say take a look at SimplyMEPIS because it is very close to Debian, but it already includes a lot of packages that you would most likely want to add anyway and it could save you some time. Oh, and the artwork is much nicer.

P.S. After finishing with this, it occurred to me that the problem with the Radeon 6290 display adapter must also exist in Debian 6.0.4, which I recently installed on the AO522. I went back and booted Debian, and sure enough the screen was 800x600, and it was using the VESA display driver. Sigh.