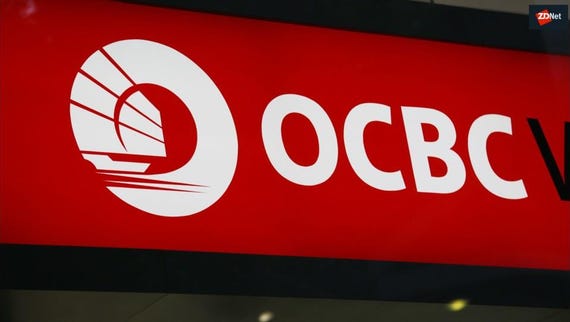 OCBC Bank has turned on face verification at selected ATMs across Singapore, letting its customers authenticate their identity without the need for an ATM card. Access, though, currently is limited to balance queries, before other transactions are added to the mix at a later stage.

Facial biometrics are available at eight ATMs in the city-state, including at the local bank's main branches in Tampines, in CBD, and at a convenience store. For now, OCBC customers will only be able to use the authentication option to check their account balance, according to a statement released Thursday.

The Singapore bank said access would be expanded to include cash withdrawals "progressively", but gave no timeline on when this would be. After this was added to the list of services accessible via face verification, it said others would be introduced from next year including cash deposits, funds transfers to other banks, cashcard top-ups, and credit card bill payments.

OCBC noted that balance queries and cash withdrawals were the two most used services at its ATMs, accounting for almost 8 in 10 transactions carried out at these machines in Singapore.

Singapore must return data control to users to regain public trust Trust plays an important role in consumers' willingness to share their personal data, but trust will erode if businesses continue to be given wider access to personal data and Singaporeans do not feel empowered to safeguard their own cyber hygiene.

The feature is powered by the government's SingPass Face Verification system, where an individual's scanned face is verified against the national biometric database comprising images and identifies of more than 4 million local residents. The technology is embedded with security features that the Singapore government says safeguard against fraud, such as liveness detection capabilities to detect and block the use of photographs, videos, or masks during the verification process.

The option to verify a customer's identity through facial biometrics also bypassed the need for ATM cards, which could be skimmed or stolen, OCBC said.

Customers keen to use the feature would be prompted to enter their identification number before positioning their face within a frame on the screen. The eight selected ATMs were armed with pre-installed web-enabled camera that would take a scan of the customer's face and verify it in real-time against the national database, to which OCBC's ATM was digital linked. Once verified, the customer would be allowed to proceed with their transaction.

Noting that consumers here, including the elderly, were avid digital adopters, the bank's Singapore head of consumer financial services Sunny Quek said: "While cash is still a key mode of payment in Singapore, the digital overlay to get cash is very welcomed by consumers."

He noted that digital adoption within OCBC had grown more than 40% last year, with more customers signed up on the country's digital e-payment system PayNow, and PayNow transactions doubling, compared to 2019.

QR code cash withdrawals at the bank's ATMs, launched in July 2019, also grew 88% year-on-year in 2020, Quek said, adding that the introduction of face verification provide another of convenience for customers who accessed the bank's touchpoints.

Its mobile banking app also clocks more than 7 million logins each month via face or fingerprint biometric authentication. Since including SingPass as a login option for its customers last July, OCBC said more than 1 million logins on its digital banking platforms were carried out using the e-government system, instead of access codes and PINs.