Government says it will introduce in third-quarter 2019 a tool called SG-Verify, which will enable businesses to perform secure identity verification and data transfer via QR scans for use cases such as visitor registration and customer acquisition.
Written by Eileen Yu, Senior Contributing Editor on May 28, 2019 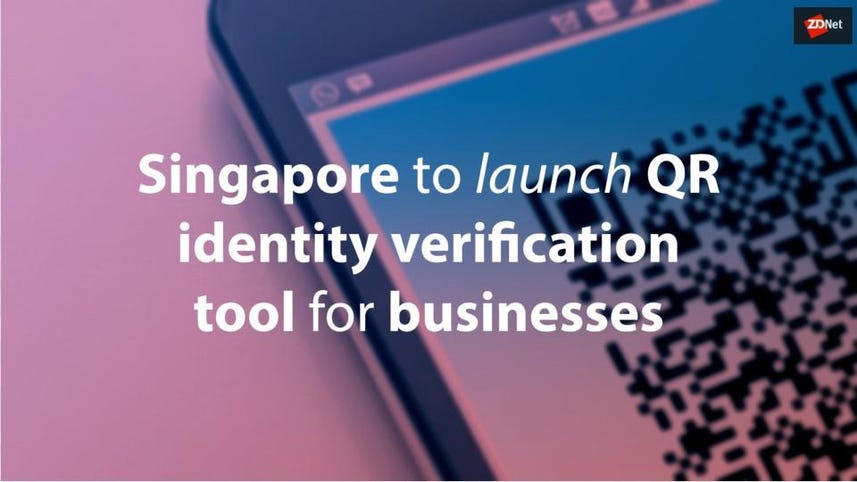 The Singapore government says it will introduce a tool that enables businesses to verify user identity and transfer data via QR codes, giving them another way to facilitate customer acquisition and visitor registration at events. Called SG-Verify, the new platform is one of several the government has been planning for deployment this year as part of its smart nation efforts.

The National Digital Identity (NDI), for instance, would serve as a common digital credential for citizens who transacted with the public sector and businesses. The latter group could tap the NDI to build new services and enhance user experience as well as security of their existing services, according to GovTech, which is the government agency responsible for Singapore's smart nation and public sector's ICT initiatives.

Slated for release by the third quarter of 2019, SG-Verify would facilitate any use cases that required identification, GovTech said in a statement Tuesday.

It also was working on a technology stack that would enable public-sector agencies to develop and roll out digital services efficiently and securely. Describing it as a digital backbone of "reusable, interoperable, and scalable" microservices, it said the tech stack would function alongside increased use of commercial cloud and cloud-native applications to allow agencies to more quickly build digital services for both citizens and businesses.

In addition, a nationwide sensor platform would further enhance situational awareness through the collection, sharing, and analysis of data and help government agencies provide more pre-emptive and responsive services.

GovTech pointed to the "lamppost-as-a-platform" pilot that was planned for the third quarter of 2019, which would evaluate the feasibility of using lampposts to deliver connectivity and power various sensors. The trial would be carried out in one-north and Geylang and would test use cases aimed at supporting municipal, mobility, and security applications, the agency said.

It also noted that more than 60 percent of the value of public sector ICT tenders were targeted at developing digital services on these key platforms, with small and midsize businesses (SMBs) eligible to participate in more than 80 percent of such contracts. In this aspect, GovTech said it was working with the finance ministry to make it easier for organisations to work with the government, with plans to streamline and launch new procurement methods for ICT contracts.

These included plans for a new co-development partnership model for the industry to jointly develop projects with government agencies on the public-sector technology stack. Dynamic contracting also was planned for upcoming bulk tenders to enable new suppliers and requirements to be brought in throughout thew contract period, hence, offering more opportunities for companies to join the existing community of suppliers.

The government had earmarked S$2.5 billion to S$2.7 billion to fund ICT projects for its fiscal 2019.

In its statement, GovTech also said citizen satisfaction with government digital services had increased from 73 percent to 78 percent, while business satisfaction with such services climbed from 64 percent to 69 percent last year. The findings were part of an annual survey to assess the top 20 digital government services in Singapore, where 1,500 citizens and 1,600 businesses were polled in face-to-face and telephone interviews, respectively.

Expected to be included as part of the upcoming amendment to the country's data protection law, the new guidelines state businesses must take no more than 30 days to investigate a suspected breach and notify authorities 72 hours after completing their assessment of the breach.

Prime Minister Lee Hsien Loong outlines the government's plans to migrate some of its systems to the cloud and build a suite of standardised software components that can be used to more quickly develop new applications.

New pilots including a drowning detection system are in the works, as the government continues to push its smart nation goal alongside an open, API-driven framework. But it stresses the importance of security in rolling out new services and acknowledges the country needs to do better, particularly, following the SingHealth data breach.

Deals
Inflation is about to change grocery shopping for good