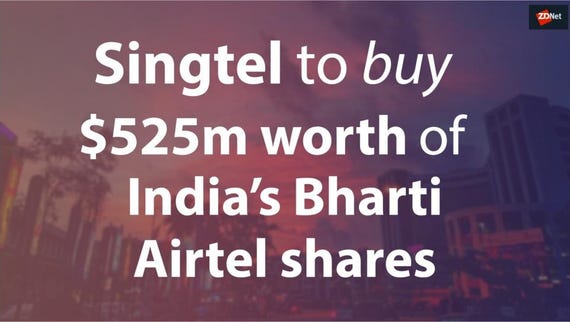 Singtel has announced plans to purchase $525 million worth of shares in Indian telco Bharti Airtel, which will use the funds to boost its balance sheet amidst continual investment into its networks and spectrum in "a highly competitive home market". Airtel has been on a fund-raising bid, putting up to $4.5 billion in shares and bonds, as it looks to cut its debt and better arm itself against competitors such as Reliance.

Singtel -- alongside Airtel's major shareholders Bharti Group and Bharti Telecom -- planned to take up their full entitlement in rights issue, with the exception of a renunciation by Bharti Telecom in favour of GIC Singapore. The Singapore state-owned investment firm had committed an estimated $700 million, pushing the total rights issue -- together with the other major shareholders -- to 67 percent.

Country's High Court has dished out orders for local internet service providers to cut off access to illicit streaming devices, many of which are Android TV boxes preloaded with applications that let users watch pirated content.

Following the close of its rights issue, which was subject to regulatory approval, Singtel said it would remain Airtel's single largest shareholder, but its effective interest would fall to 35.2 percent, from 39.5 percent.

Singtel's international group CEO Arthur Lang said in a statement on Thursday: "Our participation in this rights offering with our partners and a leading investor such as GIC reflects our long-standing commitment to Airtel and the confidence in the future of the Indian market. Airtel has performed well despite business headwinds and is consolidating its position in a more sustainable market."

Lang added that Singtel and Airtel had been partners for almost 20 years and the Singapore telco has continued to "take a long-term view of India", pointing to the company's recent investment in Bharti Telecom and Airtel Africa.

India stormed past the United States in 2017 to become the second-largest smartphone market. The country accounted for 15 percent of the global mobile subscriber base, Singtel said, citing market figures from GSMA. India was projected to have more than 1.3 billion mobile subscribers by 2025, according to Fitch Solutions (formerly BMI Research).

Singtel noted that Airtel added more than 11 million 4G subscribers in its latest financial quarter. The Indian telco has a global mobile subscriber base of almost 385 million, with operations across 18 countries in South Asia and Africa.

Singtel said it had invested SG$900 million ($663.1 million) in the Bharti Group over the past year as well as $250 million in Airtel Africa.

'Aggressive' and 'intense' competition from a carrier in India as well as only counting prepaid customers who are actually paying for a service saw Singtel Group drop 40 million mobile customers in the most recent quarter.

Singapore telco teams up with China Mobile Internet to drive the adoption of both carriers' IoT services and launches an "artificial intelligence-powered" IoT network on Microsoft Azure.

Using 5G technology from Ericsson and a prototype 5G phone from Oppo, Singtel and Optus have made a Singapore-to-Australia 5G augmented reality call.

Major players such as those from North Asia have begun offering their e-payment services in this region, but these cater mainly to their domestic customers travelling overseas, says Singtel exec, on the objective behind the Razer partnership.