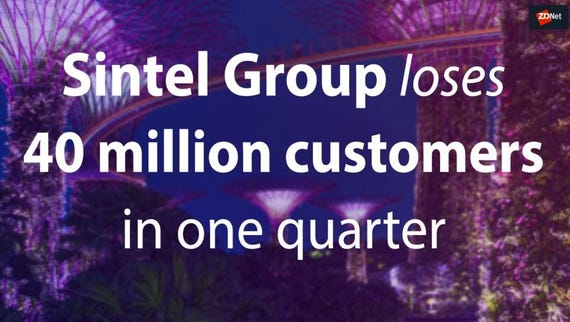 Singaporean telecommunications giant Singtel has revealed it had lost 40 million mobile customers in the quarter to December 31, largely fuelled by competition in India.

"During the quarter, Airtel continued to be adversely impacted by the continued disruptive price competition from an operator intent on aggressive market share expansion," Singtel said in its Q3 financial results report on Thursday.

Since publication, Singtel has clarified that the loss in customer base is also attributed to changing its standards in counting customers to ensure that it is only including prepaid customers who are actually paying for a service, as it did not make this distinction in previous results reports.

"Effective December 2018, prepaid customers are counted only if they generate revenue through recharge, billing or any outgoing activity," it said.

As of the end of December 2018, Singtel had 4.2 million mobile customers in Singapore; 10.2 million in Australia under Optus; 41 million in Thailand under AIS; and 74 million in the Philippines under Globe. Telkomsel in Indonesia was down from 168 million to 163 million quarter on quarter.

Airtel gained customers in Africa and South Asia for a total of 97 million and 2.5 million, respectively, but lost almost 50 million customers in the quarter to December 31 in India for a base of 284 million.

In total, Singtel reported having 677 million mobile customers across the group, dropping well below the 700 million mark it had announced in May last year.

Its associates' pre-tax earnings were almost SG$800 million less year on year, while the group's mobile services revenue was down from SG$4.3 billion to SG$4.1 billion.

Despite this, CEO Chua Sock Koong said Singtel's "long-term view on our regional associates remains positive" due to the continuing growth in data usage.

"Meanwhile, we are working closely with them to build a regional ecosystem of digital services that leverages the group's strengths and unlocks the value of our joint mobile customer base of over 675 million."

In the nine months to December 31, operating revenue was SG$13.03 billion, up slightly from SG$13.01 billion a year earlier, with net profit halving from SG$4.7 billion to SG$2.3 billion due to a one-off gain from its NetLink Trust divestment last year.

Not including NetLink, underlying net profit was still down by 23 percent, from SG$2.8 billion to SG$2.1 billion.

"Intense competition in India, higher depreciation and amortisation from network and spectrum investments by the regional associates, the increased shift from voice to data, margin erosion in traditional carriage services, and lower NBN migration revenue in Australia impacted the group's results," Singtel said.

Broken down by segment, consumers brought in SG$7.4 billion due to a decline in equipment sales and voice revenues, as well as NBN migration in Australia; enterprise revenue was SG$4.7 billion despite higher IT sales due to declines in legacy voice services and investments in cybersecurity; and digital life revenue was SG$950 million.

"We have stayed the course despite heightened competition and challenging market and economic conditions. We've continued to add post-paid mobile customers across our core business in both Singapore and Australia while making positive strides in the ICT and digital space," Chua said.

"We remain focused on investing in networks and building our digital capabilities -- areas that are important to our customers and our future success.

"We will also step up on managing costs, growing revenues and driving efficiencies through increased digitalisation efforts."

Health Minister Gan Kim Yong says the government had to "balance" the interests of affected individuals and general public after discovering in 2016 the personal data of individuals diagnosed with HIV had been illegally accessed, and only publicly revealed the incident in January 2019.

Singtel's first-half revenue was down across mobile services, data and internet, fixed voice, and ICT, but up across sale of equipment, digital businesses, and pay TV.

As more and more employees request the opportunity to perform some or all of their work from a remote location, the need has grown for organizations to have clearly defined guidelines that govern employees.