Using 5G technology from Ericsson and a prototype 5G phone from Oppo, Singtel and Optus have made a Singapore-to-Australia 5G augmented reality call.
Written by Corinne Reichert, Contributor on Feb. 21, 2019 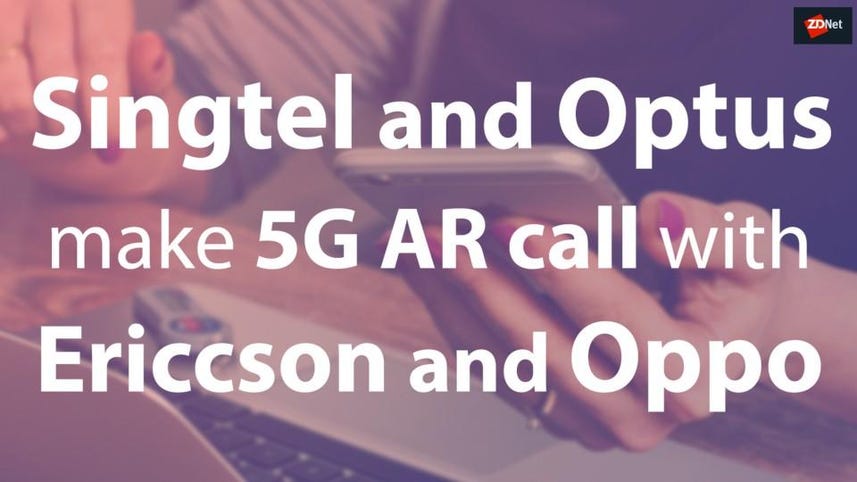 The call was made using an Oppo prototype device powered by a Qualcomm Snapdragon X50 5G modem.

"AR provides users with a more inclusive form of communication, opening up new possibilities for enterprises, ranging from mobile collaboration between experts in different locations [to] on-the-job training, to remote assistance," Optus and Singtel said.

According to Optus CEO Allen Lew, the call is "another step in our commitment to lead 5G delivery in Australia".

"This call is a significant marker in our journey to 5G as we develop a robust 5G ecosystem to ensure that our enterprise and consumer customers will enjoy an enhanced connectivity experience," Singtel CTO Mark Chong added.

"5G is a key enabler that will bring the future of AR, autonomous vehicles, and smart cities closer to reality."

Singtel said it has partnered with Ericsson in deploying a "robust 5G ecosystem", while Optus will use the networking giant to build 50 of its initial 5G sites over the next few months.

Last week, Optus switched on its fourth 5G mobile tower, with 50 sites due to be online by March to provide coverage to 60 suburbs.

5G Home Broadband on Optus will cost AU$70 per month for unlimited data at a 50Mbps minimum speed guarantee, and is slated to provide connectivity by the second quarter of 2019. Optus is working with both Nokia and Ericsson, with Lew saying the company will be taking a "multi-vendor approach" to its network. In an interview with ZDNet, Lew also denied that the Huawei 5G ban had an impact on the rollout, saying that it neither slowed it down nor made equipment more expensive.

On the smartphone side, Optus is working with all smartphone manufacturers, and expects to see 5G phones in the May/June window.

Ericsson and Oppo also signed a 5G deal earlier this week that will see them collaborate on 5G device testing and demonstrations, as well as 2G, 3G, and 4G patent cross-licensing, while Ericsson has also made updates and improvements across its 5G platform for carriers.

Optus has announced a nine-month net profit of AU$431 million and EBITDA of almost AU$2 billion on revenue of AU$6.8 billion.

Australian pricing for the new Samsung Galaxy S10 series range from AU$64 per month on Optus to AU$1,849 outright from Amazon, with Telstra offering unlimited data for AU$199 a month.