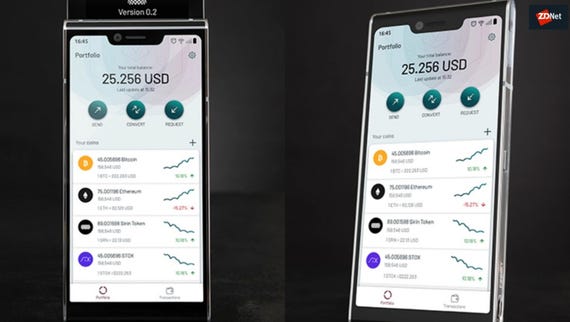 Sirin Labs, the company that two years ago launched the ultra-secure, ultra-expensive ($14,800) Solarin smartphone, has now finalised the design and specification of its next offering. FINNEY looks very similar to Solarin, but costs nearly 15 times less ($999) and features a secondary slide-out touch screen that provides a window on an embedded cold storage crypto wallet. It's this, plus extra functionality provided by Sirin OS -- a security-hardened fork of Android 8.1 -- that underlies Sirin Labs' claim that FINNEY is the "first-ever blockchain smartphone".

"We were wondering what prevents crypto-currencies from hitting the mass market, and we identified two main problems," Nimrod May, chief marketing officer at Sirin Labs, told ZDNet. "One is around security: for the first time in history, users need to take care of their own assets, without the ability to approach a central organisation like a bank. The other main problem with blockchain is the user experience: we [crypto enthusiasts] manage to obtain our cryptos, we know where to trade them, we understand the technology behind it -- but it's still something that's considered complicated for the average user."

"The vision of Sirin Labs right now is to bridge the gap between the blockchain economy and the mass market, by basically addressing and resolving these two inherent problems," May explained.

As well as the cold storage wallet, which is activated (or 'warmed') when FINNEY's two-inch Safe Screen slides out, Sirin OS provides a multi-layered cyber-protection suite that includes a behaviour-based intrusion protection system (IPS), secure communications (voice, text and email), and multi-factor authentication. Other key features available at the smartphone's planned November launch will be a Token Conversion Service (TCS) and a proprietary DApp (decentralized application) store alongside the regular Google Play store.

"The TCS prevents the need for users to go and try and get different coins from different exchanges while using decentralized applications," said May. "It's going to be a very seamless experience: you want to roam from one application to another, and they all require different tokens, but you don't want the hassle of trying to get these tokens from different exchanges." With Sirin Labs' one-stop-shop TCS, the transfers and transactions needed to make a purchase using a coin that's not currently held in your wallet all happen in real time.

Phase two of the FINNEY roll-out, in 2019, will add a peer-to-peer (P2P) blockchain network to connect the devices and run the economy based around Sirin's SRN token. "We have ongoing development efforts and discussions with the Cardano team, and with the Iota team and other emerging blockchain protocols," said May. "We need to understand what is the most scalable one, that can make the dream of running a full ecosystem with blockchain and decentralized applications -- it might even result in our own blockchain network," May added. Sirin Labs will also release an SDK to enable the development of DApps that benefit from a fee-less P2P resource-sharing system.

Here are the specs for the FINNEY smartphone, which will be manufactured by Foxconn:

As you can see, FINNEY has a perfectly respectable 2018 flagship smartphone spec, although some users may hope for better than IP52 dust and water resistance (5='dust protected', 2=resistant to 'dripping water'). When asked about the possible load imposed by the crypto wallet subsystem on the 3,280mAh battery, Sirin Labs' co-CEO Zvika Landau pointed out that, since it will be disconnected for most of the time in normal usage, "it won't have a real impact on power consumption". Note, though, that there's no mention of wireless charging.

To fund FINNEY, Sirin Labs held an ICO based on its SRN token, raising a total of $158 million by the end of the sale on 26 December 2017. What kinds of people invested? "It's a mixture between institutionals and big crypto investors -- about two-thirds in our case -- and crowdsale," said May. And who is the phone for? "When you deep-dive and try to understand who is the ideal customer, they are millennials," replied May.

What kind of DApps does Sirin Labs envisage running on its blockchain ecosystem? "We're constantly on the look-out to understand what's going to be the next generation of decentralized applications that's going to be mass-adopted," said May. "We're looking for Uber-like blockchain companies -- the Brave browser, for example, or consumer-facing apps like Cryptokitties."

Will blockchain prove to be the next killer app for smartphones? Sirin Labs is betting that it will, and is seeking to licence its Sirin OS to other vendors, in a conscious echo of Google's strategy with Android. Huawei has been flagged as a potential Sirin OS licensee, while HTC's Exodus is a very similar proposition -- although Sirin Labs executives wouldn't confirm whether it has Sirin OS onboard.

As noted above, Sirin Labs expects to launch FINNEY in November at a cost of around $999 (or the equivalent in SRN tokens), with Argentine soccer superstar Lionel Messi as the company's brand ambassador (see video below). To help build momentum behind FINNEY, Sirin Labs plans to transform its London store into a blockchain 'knowledge centre' and open nine more over the next 18 months, starting with Tokyo and the US.

Sirin Labs forecasts sales of 100,000 FINNEY units for the first year, and is confident of going "far beyond" that, says co-CEO Landau. We look forward to a hands-on test later this year.

Sirin Labs launches ultra-secure, ultra-expensive Solarin smartphone
It's the 'best' and 'most secure' phone ever made, its maker claims.

SEC director says Ethereum does not fall under securities regulation
The price of the cryptocurrency surged after the US watchdog weighed in on the debate.

Rising smartphone prices prompt buyers to keep phones longer, buy refurbished devices (TechRepublic)
As the price of flagship smartphones climbs past $1,000, consumers are keeping their phones for longer periods of time and buy more refurbished devices, according to a new report from IDC.