Just before Google finally released Google Drive cloud storage and sync (see our First Take here), Microsoft made some improvements to its own cloud sync and storage service, SkyDrive, including releasing preview Windows and Mac versions of the SkyDrive app that's already available for Windows Phone and iPhone. (There isn't an official SkyDrive app for Android, but Microsoft has endorsed some of the free Android apps like Browser, Portfolio and Cloud Explorer).
Written by First Take , Previews blog log-in on April 28, 2012

Just before Google finally released Google Drive cloud storage and sync (see our First Take here), Microsoft made some improvements to its own cloud sync and storage service, SkyDrive, including releasing preview Windows and Mac versions of the SkyDrive app that's already available for Windows Phone and iPhone. (There isn't an official SkyDrive app for Android, but Microsoft has endorsed some of the free Android apps like Browser, Portfolio and Cloud Explorer).

SkyDrive itself has been available since 2007; if you've used it before, you can get 25GB of storage free and new users get 7GB of space because Microsoft's statistics show that's all most people use. That's more than the 5GB included with Google Drive and iCloud, or the 2GB free with Dropbpox. The maximum file size is now 2GB (the same as Dropbox, but smaller than Google Drive's 5GB), and videos are still limited to 100MB.

The preview SkyDrive app for Windows 7, Vista (and OS X) isn't a file browser like the mobile apps or even the Windows 8 Metro-style SkyDrive preview app; it doesn't need a special file browser because you already have Explorer (or the Finder) so you can work with them like any other file. What the SkyDrive app puts on your PC is a new folder, which is automatically added to the list of favourite folders at the top of the Explorer windows (on Windows Vista, 7 or 8), plus the sync tool that you'll find in the notifications area of the taskbar). That's the same way Dropbox works, and Google Drive. 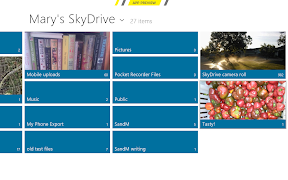 This has links to SkyDrive.com for your files and the Manage Settings page where you can buy extra storage (an extra 20, 50 or 100GB, by the year, at prices considerably lower than Google Drive; another 20GB on SkyDrive is a third of the price Google is charging, while 100GB is $10 cheaper), a link to your files in Explorer and a rather minimalist Settings dialogue. This doesn't let you control bandwidth usage or set individual folders not to sync (Google Drive does let you exclude folders from syncing). All you can do is check that sync is running, set whether to start the SkyDrive app when Windows does, unlink your PC from SkyDrive if you don't want to sync any more and enable remote access to files on your PC through the SkyDrive site. 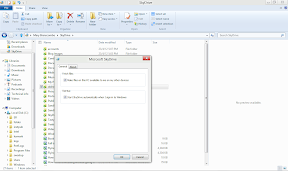 There aren't many settings in the SkyDrive app

Files you create on your PC are automatically synced to your SkyDrive and on to any other PCs that are syncing with your SkyDrive account automatically. Files you delete from the SkyDrive folder of any of your synced PCs — or just move to another folder — disappear, as you'd expect. It can take a couple of seconds for changes to appear in the SkyDrive web page, but synced files disappear almost in real time. 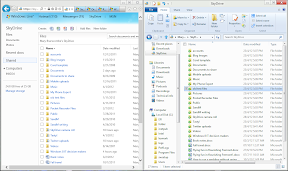 SkyDrive and the SkyDrive folder side by side

The SkyDrive folder on your PC isn't a library, so you can't link folders that are in a different folder structure and have them synced — at least officially. If you want to force other, arbitrary folders to sync to SkyDrive you can use the MLINK command to create a symbolic link that puts an alias to the other folder into your SkyDrive folder. That will sync the folder to SkyDrive, but because it's a symbolic link the files won't get updated immediately — only when you start the SkyDrive application, because it's not monitoring the other folder directly and the symbolic link doesn't trigger uploads the way a real folder does. Alternatively you can keep the files in your SkyDrive folder and include them in the folder structure you usually use, with symbolic links or, more easily, using libraries.

For example, if you have photos or videos or music on your SkyDrive you can include those folders in your photo, video and music libraries so you see the files in the right place, although you have to remember to save anything you want to have sync in the folder that's inside the SkyDrive folder. Given that the average hard drive is far larger than your SkyDrive allowance, that's a good habit to get into.

OneNote files don't sync to your SkyDrive folder; instead you get a shortcut that opens them in the OneNote Web App. That makes sense; if you have the PC version of OneNote the files will already be synced there and you don't want them twice, if you don't you need to open the Web App anyway.

Files and folders that other people have shared with you do not sync to your PC either. That's irritating if most of what you use SkyDrive for is collaboration and exchanging files, but it also protects you from downloading files without realising it — they might fill up your hard drive or be a security risk. There's always a balance between security and convenience, and it would be nice to be able to select specific files shared with you to be synced. The mobile and Windows 8 apps do let you see files shared with you, but they're only downloaded when you click on them, not synced automatically.

Any files you haven't put in the SkyDrive folder are still accessible from SkyDrive on another PC, as long as your PC is turned on. The list of PCs that have the SkyDrive app on shows up on the SkyDrive page alongside the other categories of files you can view; click it to get a list of libraries, folders and drives as tiles (with favourite folders from Explorer like Desktop and Downloads at the top of the screen). Enter a security code that gets sent to your mobile phone or an alternative email address and you can download them, so getting your SkyDrive-associated email address account hacked doesn't compromise your PC as well. You can fetch files from a PC on another PC or on a Mac, but you can't get files from a Mac on a PC.

Viewing and editing files on SkyDrive has some advantages over Google Drive and Docs; Office format files (and other formats like WordPerfect, ODF, text and HTML files) open in the Office Web Apps, without changing the file format the way Google Docs does — so when you sync a file to your SkyDrive you can edit it in Office on your PC or Office Web Apps online, and editing it Office Web apps doesn't convert the file to something you can only edit online, the way Google Docs does. The Office Web Apps don't have the full set of Office features, but they have a fair selection, you see far more of a complex document than with Google Docs (and no formatting is lost) — and you can share a file and edit it at the same time as a colleague. You can't edit PDF files on SkyDrive, but you can view then in whatever plugin your browser usually displays PDF files (and you can edit them in whatever software you have on your PC that can edit PDF files once you sync them). You can also view photos that are on SkyDrive (including RAW files) as a slideshow, and play H.264 and WMV files that are on SkyDrive in the browser.

For businesses, the important thing to remember about SkyDrive isn't how convenient it is to use, or how well priced the extra storage options are. It's that this is a consumer cloud service and there's no security or tracking of who is uploading a file or where it's being shared. That's the same for all consumer cloud services, USB drives and anything except a managed enterprise cloud service like SharePoint, Box, Egnyte or a secure document exchange service like IntraLinks. If that's an issue, you need to be running Active Directory Rights Management Services or other inforamtion-centric security tools as well as considering blocking the sync apps for SkyDrive, Google Drive, Dropbox and similar services.

If you don't have those security issues, SkyDrive is simple, convenient and — especially if you can claim the extra storage — a great deal. It's not as flexible as the unlimited peer-to-peer sync that Microsoft's Live Mesh tool offered, but it's not as confusing either. It doesn't have the OCR option of Google Drive, but that's surprisingly limited — and like other Google Docs editing, leaves your file trapped in the cloud rather than synced back to your computer in case you want it offline. The remote access for files is very useful, assuming you leave your PC on when you're out, and counting the unofficial apps for Android, you can get a SkyDrive app for almost every platform). The only drawbacks are not being able to sync files people have shared with you, or conversely, being able to exclude folders from syncing.