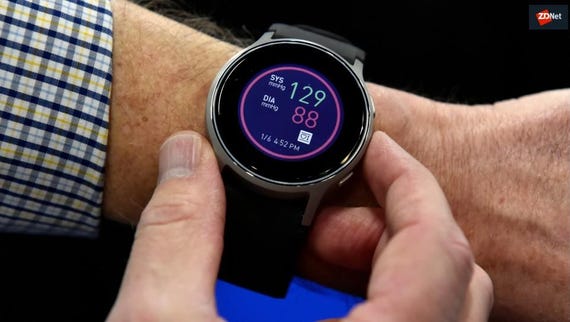 With a little tweaking, smartwatches can guess what the user is doing
Watch Now

Here's something that feels a little ... creepy. By making a few changes to a smartwatch's operating system, researchers at Carnegie Mellon University's Human-Computer Interaction Institute (HCII) were able to determine what sorts of activities the wearer was engaged in.

The team utilized the watch's accelerometer to make remarkably accurate guesses about how users were moving their hands. An app on the watch was able to equate the the motions with everyday activities, including typing on a keyboard, washing dishes, petting a dog, pouring from a pitcher or cutting with scissors.

It's a privacy advocate's worse nightmare, though the research may also pave the way for new kinds of contextual apps.

"We envision smartwatches as a unique beachhead on the body for capturing rich, everyday activities," said Chris Harrison, assistant professor in the HCII and director of the Future Interfaces Group. "A wide variety of apps could be made smarter and more context-sensitive if our devices knew the activity of our bodies and hands."

There's parallel between the research and the way smartphones can determine when a user is driving in order to block certain activity, such as text messages. A CMU spokesperson suggested that smartwatches might soon learn not to interrupt users during critical tasks, such as using kitchen knives or operating heavy machinery. Helping smokers quit by detecting when they're taking a drag is another interesting application.

"Hand-sensing also might be used by apps that provide feedback to users who are learning a new skill," according to the spokesperson, "such as playing a musical instrument, or undergoing physical rehabilitation. Apps might alert users to typing habits that could lead to repetitive strain injury (RSI), or assess the onset of motor impairments such as those associated with Parkinson's disease."

The researchers recruited dozens of people to wear smartwatches for 1,000 hours of daily activities. The watches recorded hand orientation, bio-acoustic information, and motion, and then prompt the wearer to describe the hand activity.

"The 25 hand activities we evaluated are a small fraction of the ways we engage our arms and hands in the real world," said HCII Ph.D. student Gierad Laput.

The researchers will present their findings at the upcoming (and verbose) Association for Computing Machinery's Conference on Human Factors in Computing Systems in Glasgow, Scotland.