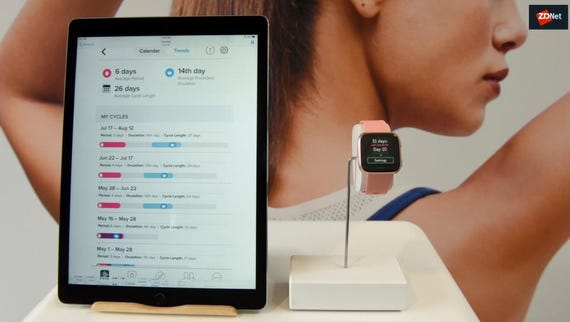 As wearable devices like smartwatches become more popular with consumers, and remote monitoring of patients using these devices becomes a standard part of healthcare in the next few years, we will have to answer some big questions around privacy and security.

Around $20bn a year will be spent on wearable devices, health trackers and remote patient-monitoring devices within five years, according to tech research company Juniper Research. Once you add in assistive hearables, or connected hearing aids made available by healthcare providers as well as directly to customers, the sector is expected to generate revenues of over $40bn by 2022.

The tech industry is relying on wearables to grow fast in the next few years. Tech companies made somewhere around 125 million smartwatches and other wearables last year -- up 8.5 percent from 2017, according to calculations by tech analyst IDC, which predicts that around 190 million wearable devices will be sold in 2022, which means growth of about 13 percent a year, with smartwatches accounting for over half of all sales. The growth in wearables might seem modest but is far faster than PCs or smartphones, both of which are likely to struggle with weak growth over the next few years.

While activity trackers have proved popular with some consumers, mobile operating system and smartphone vendors are now also looking to encourage the use of their devices as part of an individual's healthcare, adding features to turn their devices into hubs for storing and interpreting health and medical data. Health insurance companies are also experimenting with the use of smartwatches to encourage customers to measure their fitness and exercise more.

The use of wearables in healthcare will be driven by improvements in remote patient-monitoring technology. In addition to increased adoption by medical institutions; Juniper forecasts that five million individuals will be remotely monitored by healthcare providers by 2023. Doctors will be able to use the data generated by wearables combined with AI-enabled software analytics to proactively identify individuals at risk.

As wearables become part of patients' treatment plans, device makers will look to make money by selling data generated by those wearing the devices, for example, selling data produced by the devices to insurance providers. Juniper forecasts that service revenues of this nature will reach $855m by 2023.

That means there could be some big privacy worries ahead. Consumers, already stung by an endless series of privacy and data breaches, may be unwilling to use wearables which record data on their activity and health if this is then sold on to a third party. Tech companies and healthcare providers will need to explain clearly where and how this data is being used if consumers are to sign up.

"Data privacy and consent will continue to be a significant barrier. Improving healthcare systems, such as using AI-enabled software analytics, is contingent on patient data being anonymised. Some insurance providers are changing the dynamics. In order to be covered, they require a data feed from the policyholder's device," said the Juniper report.

Research author Michael Larner said: "It is vital that patients are made aware of how their personal data will be used. If not, making wearables 'must have' to provide personalised care or receive medical insurance risks a backlash from patients and heightened regulatory scrutiny; stalling the effectiveness of remote monitoring."

Augmented reality in the operating theatre: How surgeons are using Microsoft's HoloLens to make operations better
Surgeons at St Mary's Hospital have been using a HoloLens-based system to pick out blood vessels before surgery.

Why the NHS is killing paper records to save lives
The NHS still relies on paper for many patient records. Getting rid of it could free up time, and money.

Blood pressure watches, sleep tech and more: CES 2019 was all about health (CNET)
At CES, health, wellness and medical tech are big focuses once again.

Robots and the NHS: How automation will change surgery and patient care
The rise of robots is inevitable in healthcare, but for now, keeping it simple is just what the doctor ordered.

VR, AR and the NHS: How virtual and augmented reality will change healthcare
Against a background of growing enterprise adoption of virtual reality, mixed reality and similar technologies are beginning to gain a foothold in the NHS.

NHS and technology: Making the case for innovation
Physician, reboot thyself! The health service is caught between its creaky past and a shiny future. But change is needed, and fast.

Join Discussion for: Why your smartwatch and wearable devices...