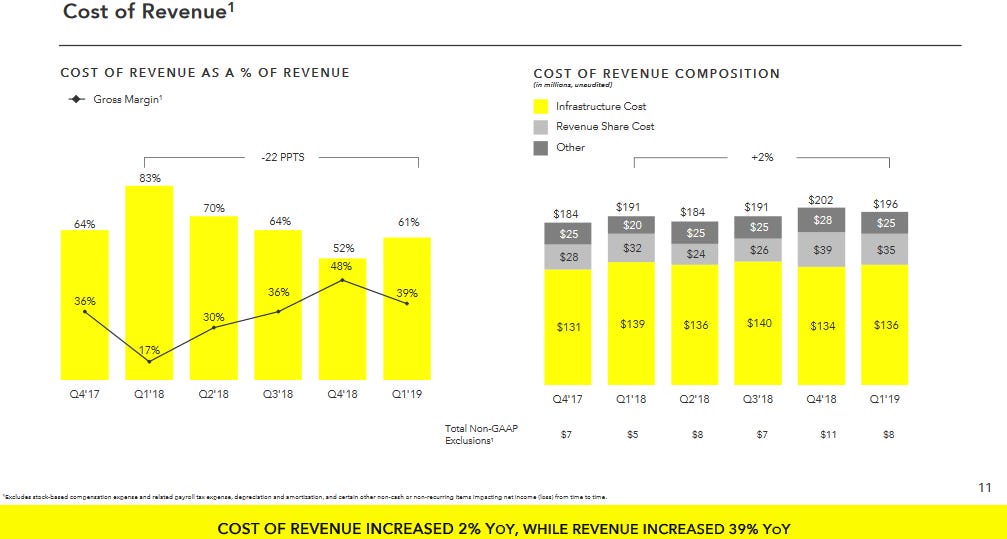 Snapchat appears to have lapped its Android app and redesign woes after two years of pain, and may even have a handle on its cloud infrastructure costs.

As for the outlook, Snap is projecting second quarter revenue of $335 million to $360 million. That guidance was better than expected.

But for Snapchat to really turn a profit it has to boost engagement (enter a new Android app and other initiatives), lower costs per user (cloud infrastructure) and grow via its ad platforms.

It's a tall order, but Snapchat is showing better tech management. Here's a look at the big technology themes.

Snapchat's Android app has been a headache for a while. First, Snapchat was late to the Android game. If you want global growth you need to have a strong Android game. And then there's the app redesign that hurt engagement. Snapchat CEO Evan Spiegel acknowledged the problems and highlighted the early figures for the company's new Android app.

As of the end of Q1, our new Android application is available to everyone. Compared to the prior version, it is 25% smaller, opens 20% faster on average and is modularized to allow for efficient ongoing innovation. On some of the lowest performing devices, this resulted in a 6% increase in the number of people sending Snaps within the first week of upgrading to the new Android build. While these earlier results are promising, improvements in performance and new user retention will take time to compound and meaningfully impact our top line metrics.

There are billions of Android devices in the world that now have access to an improved Snapchat experience, and we look forward to being able to grow our Snapchat community in new markets.

Analysts tried to get more metrics out of Spiegel and Snapchat management, but executives noted that it's too early to draw any big conclusions about the Android app. What is clear is that the Android app architecture is more modular and enables future proofing.

Spiegel added that an Android app that works well is the price of admission to grow internationally.

What remains to be seen is whether Snapchat can continue those efficiency gains. Sweet outlined three factors in Snapchat's cloud infrastructure costs:

Jeremi Gorman, Snap's chief business officer, said the company has been working with its large advertisers to build out its ad platform. The aim for Snapchat is to iterate with advertisers and ultimately drive a self-service platform.

For instance, Snapchat advertisers can buy ads based on reach and frequency and customize self-service tools. Augmented reality is also being used as an advertiser category. While the ad platform comes along, Snapchat is reorganizing its sales team. "As millennials and Gen Z are increasingly favoring short-run video and other rich mobile experiences over desktop and television, we are creating mobile ad units so that brands can reach our audience using these formats," said Gorman.