Remember when we all thought the internet would miraculously make the world better? That was then, and now we know the truth: bad people still do bad things. They just do it on the internet.

The ad-driven dynamic of commercial social media makes it profitable to drive outrage. Thoughtful and fact-based dialog is the first casualty.

Furthermore, automation has made it profitable to give each user a view of the world that maximizes involvement, without any sense of proportion or reality. The baseless Q fantasies are a case in point. 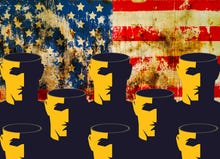 How social media is crippling democracy, and why we seem powerless to stop it Tech-assisted gaslighting is destroying truth, justice, and the American way. Can anything be done?

The Q delusions exploit defects in human information processing. At a more general level, our social media giants exploit the same defects to sell ads, without giving us the social contact we crave, especially in a pandemic.

Why should they? It may be bad for civilization, but it's great for the bottom line.

There is another way

There are alternatives, but we need more.

Decades ago advocates for non-commercial broadcasting prevailed upon the government to help fund a national, ad-free, network. Today, the Public Broadcasting Service, National Public Radio, C-SPAN, and a plethora of independent, non-profit, listener-supported radio and TV stations provide an alternative, for those who want one, to the 20 minutes of advertising every hour on commercial TV. Some 80 percent of US households tune in annually.

Why not a public, not-for-profit, social network? One whose algorithms would not push ever more extreme content. Where advertisers couldn't micro-target you. That would refer users to multiple trustworthy sources and original documents on contentious issues.

In short, a social network where civility, facts, and reason would be valued and encouraged. And cat videos.

Yes, this wouldn't be nearly as involving as the popular social networks are today. That's the point.

Societies have faced highly addictive and damaging social trends before. It happens all the time.

When industrial scale distilleries made potent alcohol cheap in the 1730s, alcoholism and its evils soared, as memorably noted by William Hogarth. When TV was young, Fred Rogers, shocked by the low standard of children's programs, began a program fondly remembered by millions of Americans.

Some problems can be solved. Others can only be managed. Social networks - and alcohol - are the latter, and must be managed, but not by only by government. Competition from a non-profit will give those who want to keep up with friends and family will have a safe space to do so.

Money is the easy part. Social media and tech firms would endow a foundation with $10 billion to create and manage the new social network. Why would they do that? Because it would relieve the pressure to regulate themselves, and the reduce the cry for censorship coming from politicians.

The network could generate income from individual donors, corporate sponsorships and the sale of subscriptions to private online sources. And coffee cups!

Human beings are flawed, and always will be. And we will always be exploited by bad actors. That's why we have regulations.

But regulations are just one tool, one that wealthy industries are adept at dodging. A non-profit social network is another way to - softly - rein in the excesses ad-driven social networks. Let's not ask our government to regulate online speech.

Instead, let's give people a non-commercial alternative to Facebook, Twitter, and Instagram, just as we have for commercial broadcasting. And then let them choose the service they want.

Comments welcome. I was on Facebook briefly years ago. When I saw how they operated I left it and have never been tempted to return.