Sony laptops usually have a little more style than the average notebooks and the new C series models announced this week are no exceptions, with designer colours covered with a translucent layer inside and intensely reflective material making the logo look as if it's illuminated.

The Sony logo on this C series reflects so much light that it looks illuminated — even when it's off.

Green, pink and orange might be too bright for the office, but the black and white options combine slightly more understated style with a reasonable specification (Sandy Bridge Core i5-241M, 4GB of memory and 320GB hard drive and the option of switchable graphics from a Radeon HD 6470M, plus USB 3 for fast storage). A backlit keyboard doesn't just look good (it's ideal for taking notes during presentations) and the rubber keyboard covers in matching and contrasting colours do more than add to the design — they serve to keep the keys clean and protect you from spills. 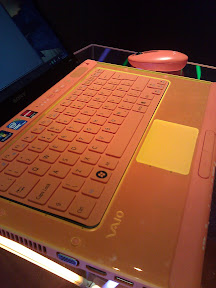 The C series colours and rubber keyboard covers are designed for the home, but style and spill protection are useful on the road too.

With Windows 7 Home Premium and a £750 price tag the C series is aimed at home users, but it's an ideal candidate for the 'bring your own laptop' schemes that more businesses are considering.

The updated S series is definitely aimed at business users, with a silver or black magnesium chassis and aluminium wrist rest; the metal chassis means it can be fairly thin (24mm) with sharp cutaways on the corners and still be sturdy as well as looking good. 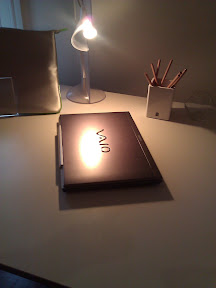 Thin, powerful and portable: up to 14 hours battery life from the VAIO S.

At 1.75kg and 13.3in. for the screen it isn't ultraportable, but the Core i5 i5-2410M, 4GB of RAM, 500GB hard drive, Radeon HD 6470Mswitchable graphics, DVD SuperMulti drive (or the option of Blu-Ray), USB 3, Windows 7 Professional and optional 3G broadband make it definitely a business machine — as does the £900 price (which goes up to £1,000 with 3G). Battery life is good at seven hours (with low-power settings Sony refers to as 'Stamina mode') and the optional slice battery that clips on underneath adds another seven hours. This comes with its own charger and the VAIO S uses the batteries intelligently; if you charge both batteries attached to the machine the internal battery charges first and when you run the notebook the external battery is used first; that way you can unclip it when it runs out and get a lighter machine.

Sony is one of the few PC manufacturers not launching tablets, but it is updating its all-in-one touchscreen PCs with Sandy Bridge (Core i5 with 4GB of RAM or i7 with 8GB), 1TB hard drive NVIDIA GeForce GT 540M (with DirectX 11 support), Blu-ray and USB 3. As well as the usual HDMI port there's also an HDMI input so you can use it as a screen, which means it can do double duty for presentations, or as a kiosk that can also work as a TV.

What's particularly clever about the L series PC is that it's not just the 24in. screen you can touch; the bezel is touch-sensitive as well, with gestures for the kind of controls you'd usually turn to the mouse for. Slide your finger up and down the right bezel and you zoom in and out; slide it along the bottom bezel to go back and forth between photos, Web pages, music tracks and so on. Tap on the left bezel to open the on-screen keyboard or top left to launch specific apps (although that's easy enough from the task bar and Start menu). The Close window button in Windows 7 is inconveniently small for touch and if you don't have a high enough touch resolution on the screen digitizer you can be left tapping repeatedly; the L series has excellent touch resolution but tapping in the top right corner to close the current window is definitely easier. The bottom corners double up on functions; tap bottom left to minimise all windows and show the desktop (a little confusing as the equivalent button on the Windows 7 taskbar in bottom right) or tap and hold to open the Windows tab task switcher. 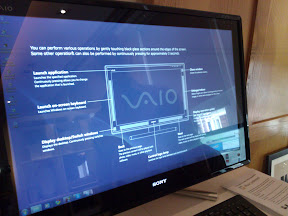 These gestures aren't always completely intuitive, but you can tap and hold in the bottom right corner to get a reminder of what you can do; we'd also like to see the option to choose what some gestures do. Even without that, this is a great approach to making touch more accessible (and it answers a lot of the complaints about fingerprints on touchscreens). Ironically, it's less useful on a large screen like this where it's not too hard to plug in a mouse than it could be on a smaller tablet, but Sony has no public plans for a tablet.