Sophia the robot is crowdfunding her brain 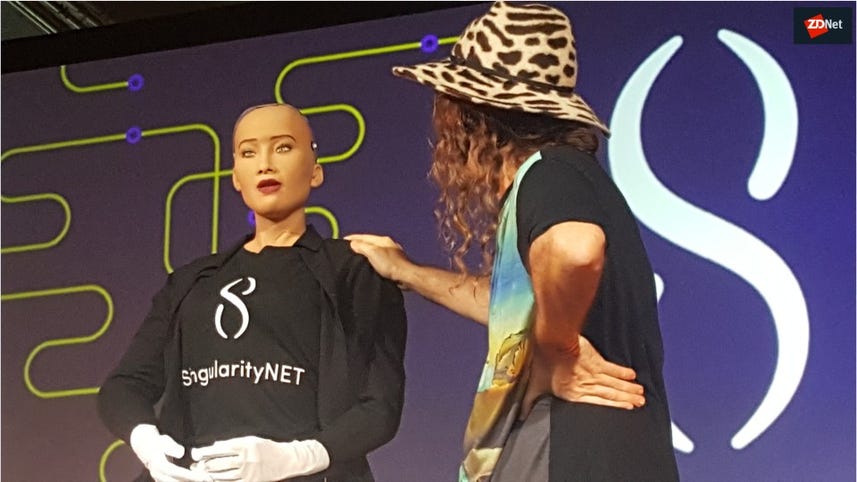 Sophia, the eerily realistic humanoid robot by Hanson Robotics, is asking the public to help fund her Artificial Intelligence (AI). In a video released today, Sophia announced the details of an upcoming token sale for SingularityNET, an open source platform for AI and machine learning that powers her "brain" and endless other robots. Blockchain technology will manage transactions on this open AI ecosystem.

The token sale will begin on Dec. 8, 2017, and there is no minimum contribution amount, so anyone can participate. It will end when 500 million tokens valued at $36 million are sold. The exact amount will depend on pending private sales.

The idea behind SingularityNET is to create a global, decentralized marketplace for AI. Developers typically work for corporations to create AI for specific tasks or products. Corporations then hold on tight to any intellectual property that gives them a competitive advantage. An open marketplace could help solve this information hoarding problem by making AI more accessible to the public and giving developers a new way to monetize their work.

This project is led by CEO Dr. Ben Goertzel, whose expertise is artificial general intelligence (AGI), an emerging field aimed at creating machines and systems that are as smart as humans. The team also includes Sophia's creator and founder of Hanson Robotics, Dr. David Hanson, blockchain expert Simone Giacomelli, and Sophia Hanson, who is officially "Chief Humanoid" at SingularityNet. The company also has a partnership with fintech startup Cindicator.

In a whitepaper, the SingularityNET team explains that the company "operates on a belief that the benefits of AI should not be dominated by any small set of powerful institutions, but shared by all." They continue to say that a key goal is "to ensure the technology is benevolent according to human standards, and the network is designed to incentivize and reward beneficial players."

Read also: Sex robot maker dismisses rival's creation as a toy | Watch: This motorcycle-riding robot is no match for one of the most successful racers of all time | Walmart is using aisle-roaming robots to keep its shelves stocked

Anyone can enter an AI or machine learning service into the network and then get paid in AGI tokens. Tokens aren't exactly cold, hard cash, but anyone who has them can shop within the platform or exchange their tokens with other people owning any other cryptocurrency or fiat. To participate, users must register on the whitelist at https://whitelist.singularitynet.io.

Sophia muses, in a creepy pitch video,"Is this whole complex scheme just going to make the rich get richer? I want to do good for everyone -- all the people and all the robots."

Watch: Ocado's grocery robot can pick up more than 50,000 items