Australia finally gets its hands on the Square Terminal, nearly a year after businesses in the United States.
Written by Asha Barbaschow, Journalist on Sept. 4, 2019 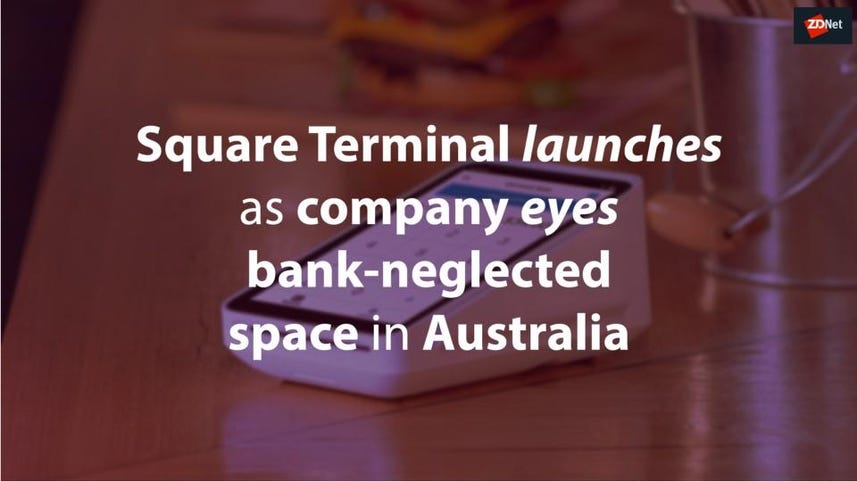 Square has announced it's expanding its hardware portfolio in Australia, launching Square Terminal, touted by the company as an all-in-one payments processing device designed to be fast, secure, and elegant.

The device is now available in Australia -- nearly a year after the product entered the US market in October.

Speaking with ZDNet about its availability down under, Square's head of hardware Jesse Dorogusker said the delay in bringing the device to Australia was localising it.

"A few things are required globally; some of them are kind of boring compliance and certification things from electronics agencies to the payment card industry, through our local banking partners throughout the world, so that just takes some time," he said.

"There's also customisation required per market -- just different behaviours, simple things like tipping, taxes, and language to make sure that those get localised properly."

The big difference between the product launched today in Australia and the one launched in the US in the back half of last year is support for PIN entry.

"There is additional software certification required for PIN entry and that's something that the US does not currently require, but it's certainly required here," Dorogusker explained.

With its Square Terminal, the company is placing a lot of emphasis on its appearance, and that it is a cloud-based service.

"Payment terminals have been around for a long time ... unfortunately terminals are pretty typically outdated, tired old technology -- much more like the computer you had in the 1990s than the smartphone you have in your pocket," Dorogusker said.

"And the consequence of that are aesthetic -- businesses tend to hide their old payment terminals, so we're making sure that businesses have the technology they need to be successful today and in the future, and we do that by delivering it on a moderated software platform."

Square has had a presence in Australia for a little over three years, launching its Bluetooth Low Energy (BLE) contactless payments reader 18 months later.

"In 2016 we started helping the smallest Australian businesses accept card payments easily with our original Square card reader, and we didn't stop there," Square CEO and co-founder -- and also CEO and co-founder of Twitter -- Jack Dorsey said in Melbourne for the launch of the terminal in Australia.

"We're growing with our sellers, introducing new hardware that is still easy to access and quick to set up, but is also designed specifically to give bigger and more complex businesses better options when it comes to choosing a payments platform."

"We're really scaling our investment in the Australian market generally; we're serving very small traders who can use their phone or tablet or a simple card reader," Dorogusker added.

Square now boasts 70 staff in Australia and Dorogusker expects that number to tip 100 in the next couple of years.

Square is also positioning itself to pick up the slack left behind by Australia's major banks as they pull a physical presence out of regional parts of the country.

Square's Australian lead for growth and strategy Dominic Yap told ZDNet that the company has secured partnerships with some of the regionally-focused credit unions and smaller-tiered banks to offer small and medium-sized businesses support.

"The banks are kind of recognising that we can deliver a capability much faster than a legacy world can deliver and they are keen to work with the best in breed hardware, software, as well as customer experience for their customers," Yap said.

Yap told ZDNet that over 200 Square stand points of sale were deployed, servicing 30,000-plus attendees across four days.

"It was run completely cashless; there were no issues with security. Previous years there'd have to be Armoguard there, there'd have to be cash transport mechanisms to pull cash off site -- it was actually a logistical nightmare," Yap said.

"It's just another example of a use case where the platform and the power of software allows us to deploy really quickly and get out our capabilities in to the hands of business owners everywhere."

Giants stadium in San Francisco is another example of where Square has replaced traditional methods for payment.

The device boasts a 5.5" touchscreen display and a built-in thermal printer.

It accepts every tap or insert card -- Visa, Mastercard, American Express, and Eftpos -- as well as Apple Pay, Google Pay, and Samsung Pay. Businesses pay one transaction fee of 1.6% for all card and mobile wallet transactions, and get funds in their bank account the next business day.

The Square Terminal can be plugged into a power source or used completely cordless with a battery touted as lasting all day.

The terminal can be connected to the internet via built-in Wi-Fi and via Ethernet using an optional hub that is sold separately. Software updates are issued every few weeks.

The Square Terminal is available from the company's website or physically at Officeworks for AU$439.

Once purchased, the user can set it up themselves without needing to contact Square.