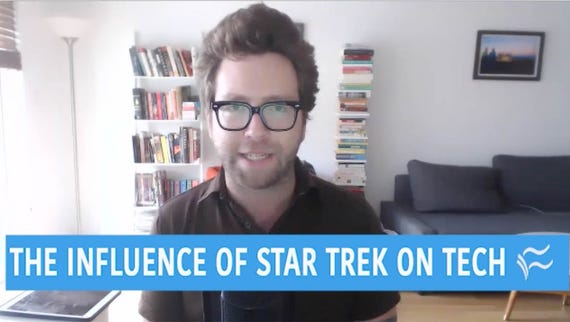 Video: The influence of Star Trek on tech
Watch Now

Video: The influence of Star Trek on tech

51 years ago, much like it is now, the world was in uncharted territory. We had few, if any examples to guide us into what was the great unknown.

Only four years before had we been on the brink of total nuclear annihilation, which was defused by a president that only a year later would be assassinated and set about a chain of events that would have political after effects we are still feeling the reverberations of to this very day.

By 1966, we had become embroiled in an overseas war in southeast Asia, which would become increasingly unpopular and a focal point for dividing the hawks and the doves among us.

And against the backdrop of war, we were enduring a painful division of society in parts of our country in which the color of one's skin, not the content of their character, determined one's civil rights and their own destiny.

From 1965 to 1969, we watched the riots in the streets and saw our country nearly tear itself to pieces, and to watch our civil rights leaders assassinated -- Malcolm X, Dr. Martin Luther King Jr. and Robert F. Kennedy -- all in succession, just like our former president.

We were also facing a presidential election in 1968 in which much of the seeds of this country's political future would be sown -- on a field that now, seemingly, is going to be re-plowed, one way or the other.

Which brings us to Star Trek, 51 years later.

September of 1966 was the month Science Fiction on television changed forever. It was when Star Trek entered our public consciousness.

In many ways, Star Trek was the right show, at the right time, despite the fact that only after its initial run of 79 episodes, and a legendary letter writing campaign by its fans to try to save it, it was canceled by NBC for poor ratings. 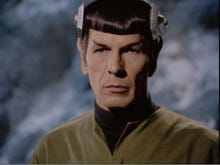 10 worst Star Trek episodes According to the fans...

It came at a moment in our country's history when we were enjoying unprecedented technological advances and yet were experiencing social and political turmoil that threatened to rip apart the fabric of our nation and also potentially destroy our way of life as we knew it.

This disparity between technology and humanity were themes that would define Star Trek in its various incarnations for the next five decades -- and perhaps, if its fans see to make it so, for decades more.

At the time, when Star Trek first aired, the Gemini program had just ended, Apollo was three years in, and we were only three years away from putting a man on the moon. The first telecommunications satellite, Telstar 1, was launched only four years earlier.

While the technology was available for over a decade and adopted very slowly, for the 1965-1966 television season, NBC decided to broadcast all but two of its shows in full color. It was a break-out year for the medium.

Mainframe computers, such as the one that successfully predicted the outcome of the US presidential race just six years before, were now becoming commonplace and much more visible in corporate America, and the disciplines of modern information technology and data processing were in their formative years.

Inexpensive, pocket-sized transistor radios were now commonplace, and miniaturized digital computers that used transistor technology, the forerunners of what eventually would become microprocessor-based systems, were being used on the Apollo space missions.

That miniaturization technology, beginning with the transistor, would send the electronics and technology industry as a whole into high gear. That and other pocket technology, such as the Instamatic camera that used a novel and an easy-to-load, cartridge-based film system, would fuel our thirst for hand-held gadgets for generations.

In 1966, the first true commercial application of laser light, which was only invented six years previous, was demonstrated by researchers in the UK as being a method for transmitting data over fiber optic cables.

This would become the technology that would eventually form the backbone of the modern internet. Its predecessor, ARPANET, was established in 1969, the last year that the original Star Trek series was broadcast in its first non-syndicated run.

The greatest Star Trek laptop stickers of all time [TechRepublic]

If it were only the technology of Star Trek that Gene Roddenberry and his team of visionary writers would speculate against this backdrop of unprecedented innovation, it would still have made TV history.

Perhaps it might have even stayed on the air longer, in the tradition of the action-packed westerns that the show was actually based on.

But the technology is not what made the show the cultural phenomenon that it is today. Star Trek did not simply aim to be Wagon Train to the Stars, as its original working title went. It was largely due to the show's social commentary that its unique cast of characters played out for us onscreen.

Star Trek was certainly not the first TV show to pose social commentary in the form of science fiction. That distinction belongs to the writers of The Twilight Zone (many would go on to write scripts and perform their roles in Star Trek -- including William Shatner himself).

It is the combination of that visionary futurism -- specifically positive, not dystopian futurism -- with relevant social commentary reflecting the major issues of the time that distinguishes Star Trek from every other science fiction program that has followed or has chosen to emulate it since.

The writing team of the original series could be said to be the original Social Justice Warriors. For every destination that the Enterprise crew visited was, in essence, an exaggerated microcosm of different aspects of the American social condition: our fears, our aspirations, our most serious challenges at the time.

Much like the late 1960s, we are enjoying unprecedented technological achievements. We now have hand-held, mobile computers with the ubiquitous capability of instantaneously sharing and accessing information. We routinely employ intelligent agents such as Google Now, Siri, and Cortana to do our bidding.

We have cognitive computing systems like IBM Watson, which can utterly destroy our best human players at a game of Jeopardy, diagnose complex medical conditions, and invent new food recipes that please our palates in innovating ways.

All of this which really would have been the stuff of Star Trek 50 years ago.

We now have a developing private space industry that will enable commercial space tourism within the next 10 years. And other firms are collaborating with NASA that may very well bring us back to the moon, and to Mars, within the next 20 years.

We now have medical treatments and wonder drugs that can cure diseases that were unheard of 50 years ago. We have sequenced the human genome and are within only years of reviving long-extinct species such as the wooly mammoth.

The next step is genetically re-designing, as well as cloning ourselves, much like Khan and his supermen.

And, like the late 1960s, our country is again in turmoil. We have a largely divided, angry, and disillusioned population that is very similar to that of 1968, with us-versus-them extremes on both sides of the fence and leaving very little in-between and no room to compromise.

Our country again faces racial turmoil as our citizens are unfairly profiled and gunned down in senseless acts of police (and civilian) violence and terror, bringing protests and anger to the streets whose likes have not been seen since 50 years ago.

And while we are not currently embroiled in a conflict like Vietnam that is dominating the news cycle, we still are projecting our presence militarily in virtually every corner of the globe, and we are using and enabling technology to do our bidding as well as to kill, from the safety of trailers thousands of miles away.

While our enemy is not as cut and dry as the Soviet Union, we still face many threats that could bring about our total annihilation at any time.

As if this was not discouraging enough, our planet's climate is also changing in such a way that maps will have to be re-drawn to reflect the coastal cities that will be completely underwater, 50 to 100 years from now unless massive engineering projects at unheard of scales are undertaken.

This is the technological and social backdrop against which Star Trek: Discovery, the sixth series to carry on the tradition, will have to envision our future when it premieres in September of 2017, almost exactly 51 years to the date of the original series premiere.

I am looking forward to the optimism, the technological wonders, and the inevitable reflection of the strengths and weaknesses of our society in microcosm yet again. We have been without Star Trek for too long.

Which is better: 'Star Trek' or 'Star Wars'?

Competition continues to drive the breathtaking pace of 3D printing innovation. Here's what we can expect very soon from this transformative technology.

40 years after the premiere of Star Wars, we're much closer to HAL and The Terminator than we are Artoo and Threepio.