Competition continues to drive the breathtaking pace of 3D printing innovation. Here's what we can expect very soon from this transformative technology.
Written by David Gewirtz, Senior Contributing Editor on July 7, 2017 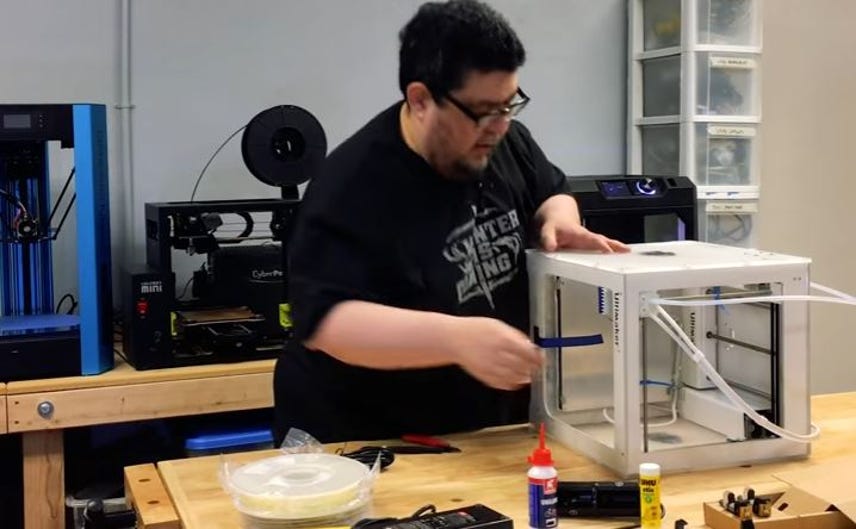 Video: Setting up the Ultimaker 3

For many technologies, the direction of innovation isn't always crystal clear. For example, we've been arguing that either the end of the smartphone is nigh, or it has a long future. The fact is, no one knows if there's a transformative technology that will upstage the smartphone.

The future of 3D printing is the Star Trek replicator.

It's not a big intuitive leap. Today, we can mix a wide range of plastic filament or liquids. Present day 3D printers produce objects that are physical, tangible, and useful. It's not hard to foresee a future where "Tea. Earl Grey. Hot." is within the realm of possibility. After all, Alexa comes close to being able to understand such things now.

There, I'd have to disagree with you. Or, more precisely, Chief O'Brien would have to disagree with you. After all, the Chief was constantly running around, trying to make sure the replicators were online. (Not to mention the transporters and holodecks.) If you think the future of technology will be simple, without the need for IT professionals like the Chief, then you're likely mistaken.

But none of that diminishes the truth: innovation will drive 3D printing forward. We already have 3D printers that print chocolate and pizza.

In fact, it's the constraints that fuel innovation. Competitors seek to have some feature or functional superiority over their foes, and one way to do that is find a way to remove a constraint. Just a few years ago, most 3D printers needed to be leveled by hand. Today, even some sub-$500 printers can align themselves automatically.

So with that, let's look at some of the vectors where we're going to see innovation, fueled by competition and growth. No doubt there will be some shakeups and consolidation in this industry, but even that will drive more innovation.

Here's a list of what I'm calling innovation vectors.

Ease of design: This is a big one, because most of us aren't designers. Think about it this way: Many folks sew using a pattern, and never design their own clothing. Many people cook in the kitchen according to a recipe, but never try to create their own recipes (except for the infamous "tuna casserole incident" -- don't ask).

Design will always be the domain of trained designers, but the tools themselves will get easier, more clear, more intuitive, and more powerful. One caution, though, to vendors: don't think an easy design tool will sell your device. No stove has been sold because it makes recipe creation easier. Stoves are sold because people want to cook food, not design recipes.

Sending an object to a printer from a phone or over Wi-Fi is common enough now. Innovation won't be a feature here or there, but will instead be more of a gestalt. How frustrated are users, and is that frustration going down? Some of the printers I've used are rock-solid reliable. Others, not so much. Innovation will come in the form of the overall quality rising across all printers.

Resolution and detail on prints: One of the hallmarks of fused deposition modeling (FDM) printers is that the printed filament usually leaves tiny layer lines in the final print. Layers upon layers of stringy filament are fused together and since the filament is slightly rounded, you get a tiny log cabin effect.

There are other types of 3D printers, including SLA (stereolithography) printers (which use lasers to fuse plastic together) and SLM (selective laser modeling) that use lasers to create very fine prints without the trademark layer lines. By improving on the filaments and the accuracy of FDM printers, we're seeing some traditional filament-based printers producing prints that look as smooth as injected molded parts.

Expect to see more output quality over time, especially as 3D printing companies compete for the lower end of the market, and try to overcome the objections of low-budget early adopters.

Materials beyond plastic: Today, most FDM printing is plastic-based. Yes, you can get wood-like or metallic-like prints, which have some properties of their respective materials. But, as I found out when I tried to print so-called wood filament, it only sort of looked like wood, and had only some of the properties of wood. The way these prints are done is by floating alternative materials in a plastic bond, and fusing those materials, along with the plastic, to the object.

Today, you can order 3D prints in many materials, including metal, ceramic, and wood. But low-end desktop printers are limited to plastic. Give it time. I expect we'll see $1,000 3D printers able to print in much purer materials over time.

Multiple colors: Some 3D printers have more than one extruder, the device that deposits material onto the print. I've been working with the Ultimaker 3, which uses two extruders.

Over time, expect to see printers that can print color gradients and mix colors, very much like we mix colors on modern photo printers, in combinations of red, green, and blue, or cyan, magenta, yellow, and black.

Combining colors and materials: The dual-extruder Ultimaker 3 is able to combine materials into one print. For example, you can print the body of an object in PLA and the support structures in a dissolvable PVA filament -- all in one printing session. This process fuses materials together, yet allows them each to have their own properties. Current printers can also fuse solid plastic with flexible, rubber-like plastic to make joins that can bend.

As time goes on, expect to see more complex mixes of materials, including printers that can mix fused metal printing with fused wood printing, for new and fascinating objects. This will take time, because the material science and production methods have to catch up, cost reduce, and become safe enough for small office and departmental use -- but it's going to happen.

Bigger and smaller: You know the tiny screws in your eyeglasses? They're definitely too tiny to 3D print today. As we get more capable in terms of material, and more precise in terms of production and process, expect 3D printers to be able to produce very tiny objects.

Likewise, expect 3D printers to scale up. Already, we're seeing some companies going after traditional construction, like the Apis Cor project that aims to 3D print houses. Will we use our 3D printers to print a new shed out in the back? Unlikely. But once you watch this guy 3D print a small castle using extruded concrete, you realize it might be possible to build a small robotic device that moves and prints building materials. It's the future.

Another size innovation of note: we're starting to see 3D printers print objects on a moving belt, like from an assembly line. These printers, like the Printrbelt from Printrbot, can be used either to print longer objects (as long as the out-feed area allows) or, assuming a way to detach the objects is developed, manufacture a sequential series of objects without requiring the base plate to be periodically emptied of objects.

We're just starting to see the first few desktop laser subtractive fabricators. As time goes on, expect to see devices that allow you to mix additive and subtractive printing, either in the same printer, or using the same device. It might be a case of swapping tool heads, or it might be a case of multiple heads used for different purposes, but it's coming.

Cost: Let's end our discussion with the one factor that's pushing 3D printing forward: the reduction in cost. A few years ago, you could get under $500 3D printers, but they had only very tiny build areas. However, that's changing.

The folks at GearBest just sent me a Creality CR-10 printer. This thing has a 300x300x400mm build volume, which is bigger than any of the printers I currently have in my shop, including those costing $3,000 and above.

Just a few months ago, I made the statement that build area generally tracks with price -- the bigger the build area, the bigger the price. The CR-10 sets that on its ear. I think we'll be seeing that busting of the price/performance trend line across many more aspects of 3D printing, in just the next few years.

Stay tuned. We'll keep exploring and discovering. As always, you're invited to come along with us!