Microsoft's support lifecycle for every Windows version is a generous 10 years from the date it was launched. That means even those still clinging to Windows Vista can count on more than a year of security updates, until April 11, 2017, and anyone running Windows 7 can do so with confidence until January 14, 2020.

So Windows 8, which was released in October of 2012, should be supported until well into the next decade, right?

Thanks to a quirk in the support lifecycle, Windows 8 users are about to be cut off from security updates. When the first Patch Tuesday of 2016 rolls around on January 12, it will represent the last batch of updates for Windows 8.

If you're still running Windows 8, it's time to update to Windows 8.1 or Windows 10 or risk exposing your PC to unpatched security risks.

The reason for this odd state of affairs is that Microsoft is treating Windows 8.1 as a service pack to Windows 8. The rules allow you to hold off on installing that service pack, but only for two years. Here's the formal policy, which I've stitched together from two separate documents:

Unlike service packs that are typically just a collection of fixes, Windows 8.1 has new features and enhancements. We designed Windows 8.1 to give customers an ability to deploy this update in a manner that is similar to how customers deploy service packs, therefore we are applying the existing service pack support policy to Windows 8.1.

[For] Windows 8, support ends 24 months after the next service pack releases or at the end of the product's support lifecycle, whichever comes first. If you are using software without the latest service pack you won't be offered any new security or non-security updates, although preexisting updates will continue to be offered.

And that time is now up.

The good news is that upgrading to Windows 8.1 pushes the deadline out significantly. Windows 8.1 reaches the end of its Extended Support phase on January 10, 2023, and there won't be any additional service packs to complicate that deadline.

Upgrading to Windows 10 extends the lifecycle even further, to October 14, 2025. 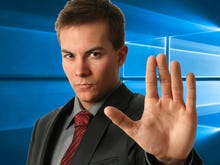 Here's how to say no to the new version in 30 seconds or less, without installing third-party software.

Windows 8 might seem like a historical footnote at this point. However, as of the end of December 2015, three analytics sources I track calculated the percentage of PCs running Windows 8 (not including 8.1) at between 2 and 3 percent of the total installed base of desktop and laptop PCs and Macs. That small percentage of a very large number (about 1.5 billion by most estimates) still adds up to between 30 and 40 million PCs.

The upgrade from Windows 8 to 8.1 is unlike any other Windows upgrade; it requires a trip to the Windows Store rather than the normal Windows Update route. The update is free for almost all. The one exception: Any enterprise with a Windows 8 Volume License that doesn't include Software Assurance has to pay extra.

I suspect that most of the devices still running Windows 8 are consumer PCs, purchased by technically unsophisticated users who've never been to the Windows Store and ignored any prompts they might have seen to upgrade. Starting next week, they're living very dangerously indeed.