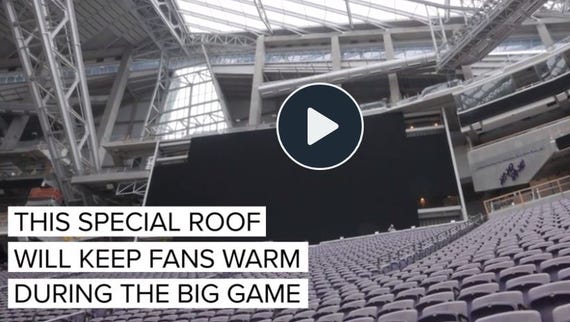 America's four largest carriers have spent years preparing for the 2018 Super Bowl, installing hundreds of new antennas and small cells to increase speeds and capacity by up to 1,000 percent for the 1 million fans who will visit Minneapolis for the game.

Not only will these upgrades be used to increase speeds and capacity in US Bank Stadium during the game and the city, however; they will also lay the groundwork for dense 5G networks, according to the carriers.

Here's what to expect for those visiting Minneapolis-Saint Paul this week.


Verizon has been preparing for the Minneapolis-hosted Super Bowl for two and a half years, the carrier told ZDNet, adding 24 new cell sites and more than 200 small cell sites to increase the density of its network.

The process also involved installing 48 percent more antennas to its distributed antenna systems (DAS) at US Bank Stadium, and deploying neutral host DAS systems at the Mall of America and Minneapolis-Saint Paul International Airport to boost network capacity by 900 percent and 1,000 percent, respectively.

These neutral host DAS systems were then joined by the other carriers.

"At US Bank Stadium, we have the largest antenna system for our customers, with 1,200+, and we have exclusive designs to ensure a consistent experience throughout the venue. We created antennas that blend into the stadium -- in the handrails, under the seats, and even new drink rail antennas," he said.

"On top of that, we have upgraded DAS systems at other venues throughout the metro area ... small cells are important because when a million people are attending the 10 days of events leading up to the game itself, you need to add network capacity closer to where demand by smartphone-toting fans is greatest on the network."

For instance, at Nicollet Mall -- which will host the Super Bowl Live event in the week leading up to the game -- Mecum said Verizon doubled its LTE capacity by adding small cells to bus shelters.

Verizon field technicians will be walking events during the week to provide real-time monitoring and management of network performance so it can be tweaked to provide a better experience.

Mecum said Verizon's speed goal is not quantified with a number; rather, it's all about ensuring customers are able to get on the network and do whatever they want to do -- whether that's uploading a photo, sending a message, or checking their email before, during, and after the game.

"The usage increases every year; last Super Bowl, our customers used 11TB of data. This year, we expect 15 to 20TB of data to be used. So we need to build our system bigger every year to make sure we have more capacity than what our customers will need," Mecum explained, adding that Verizon ranked first in third-party testing for the previous two Super Bowl host cities.

Verizon has also used its network to help improve public safety for the city by mounting security cameras on a couple dozen of its small cells in downtown Minneapolis to feed footage back into a command centre.

"Because we had built so many small cells, hidden in plain sight on street light poles, they were able to place cameras in areas they did not have them where Super Bowl traffic is expected," Mecum said.

The carrier said it has permanently increased its LTE capacity by 35-fold at the Minneapolis Convention Center, which is holding the Super Bowl Experience; 30-fold at US Bank Stadium; 16-fold at the Xcel Energy Center, which is hosting Super Bowl Opening Night; and eightfold at the Armory, Nicollet Mall, downtown Saint Paul, the Mall of America, and Minneapolis-Saint Paul International Airport, as well as at hotels and venues throughout the city.

"We've permanently expanded coverage and increased network capacity up to 35 times over the last two years so that we can deliver an incredible mobile experience for local customers and visitors for the Super Bowl and beyond."

These small cells will in future also be used to launch commercial LTE Licensed Assisted Access (LTE-LAA) technology, she said, to improve capacity and speeds even further.

Silveira told ZDNet that T-Mobile has additionally utilised "unique network technologies" across US Bank Stadium's DAS, and upload speeds inside the stadium have been boosted by 40 percent across T-Mobile's network thanks to the deployment of Radio Access Network (C-RAN) technology.


Sprint has been working for the last year to improve its Minneapolis LTE network, which regional VP Scott Santi told ZDNet would benefit local businesses and residents "long after the crowds subside".

"The day after Super Bowl 51 is the day we started working on this year's event, investing in new infrastructure across the entire region," Santi told ZDNet.

"We've made sure our customers will have a great experience across the city and at every seat, stairwell, and corridor in the stadium."

Sprint has employed three-channel carrier aggregation -- 800MHz, 1.9GHz, and 2.5GHz -- across 400 cell sites, as well as installing 200 new small cells using 2.5GHz spectrum in both the stadium and on lamp posts and street lights throughout the city.

800 new DAS antennas have been installed inside US Bank Stadium, and hundreds of Sprint Magic Boxes -- labelled the world's first wireless small cells -- have been provided to local businesses to boost indoor data speeds by 200 percent on average.


AT&T said it has spent more than $40 million to improve its LTE network throughout the city and stadium ahead of the Super Bowl and the expected influx of 1 million people.

According to AT&T, it has installed more than 800 antennas above the US Bank Stadium field to increase LTE capacity by 220 percent; added 150 antennas to Saint Paul Arena; increased its network by 715 percent in the Mall of America; increased its network by 194 percent in Minneapolis-Saint Paul International Airport; and added two "giant eyeball antennas" to the Commons to increase capacity by 283 percent.

"We've been working for over a year to boost the network in Minneapolis for the Big Game. We've done this through a series of permanent and temporary upgrades throughout the city," AT&T explained earlier this month.

"We've overloaded the stadium with wireless capacity and boosted LTE capacity by more than 150 percent compared to last year. With more than 800 antennas, the network inside the stadium alone could provide coverage to the entire city of Minneapolis."

The carrier has also upgraded or installed DAS at 16 areas throughout the city in order to improve coverage at hotels, venues, airports, convention centres, and arenas.

Temporary improvements to increase capacity and network speeds during the week leading up to and during Super Bowl LII includes the deployment of 10 cells on wheels (COWs), including a Super COW in the Stadium Commons area and COWs on the north and south sides of the stadium.

There are also COWs near Summit Avenue and 35E; on Nicollet Avenue for pre-game events; near Mystic Lake for pre-game concerts; and near the mall in Bloomington to account for increased tourism.

Laying the groundwork for 5G?

T-Mobile's Silveira told ZDNet that the carrier has also more than doubled user speeds by using LTE-Advanced technologies in Minneapolis, including carrier aggregation; 4x4 Multiple-Input Multiple-Output (4x4 MIMO), which doubles peak rates without the need for additional spectrum; and 256 Quadrature Amplitude Modulation (256 QAM), which boosts the peak rate even further.

"Not only do these technologies showcase Minneapolis as a leader in network evolution, but they will also lay the foundation for 5G," Silveira told ZDNet.

Sprint's Santi added to ZDNet that any network upgrades, including LTE-Advanced features and the addition of small cells, will help provide a foundation for 5G networks, as they allow for higher data rates by providing the increased densification necessary for 5G.

While Verizon has likewise deployed 4x4 MIMO, three-carrier aggregation, and 256 QAM in Minneapolis-Saint Paul ahead of the Super Bowl, it took aim at other carriers for calling such networks "5G Evolution" when in reality they have simply been kitted out with LTE-Advanced features.

Verizon's criticisms follow AT&T launching its 5G Evolution network in parts of Minneapolis, which it said includes carrier aggregation, 4x4 MIMO, and 256 QAM and the addition or enhancement of 122 cell sites.

"We've been working closely with the city of Minneapolis to ensure its network is ready to support the technology of the future. The investments we're making prepare us for the future of 5G and innovations like smarter cities and immersive entertainment experiences like augmented and virtual reality," AT&T said at the end of last year.

According to Verizon, however, it will be "the first provider out of the gate" to bring actual 5G to market.

While US President Donald Trump's security team is allegedly recommending the nationalisation of 5G networking standards, Verizon is planning on launching a 5G network in Sacramento in the second half of 2018, while AT&T is aiming to provide 5G to 12 markets by the end of 2018, T-Mobile is beginning a 5G rollout in 2019, and Sprint is undertaking 5G trials with Ericsson.

Saying China is poised to become the global leader in 5G and AI, the US government has suggested mandating 5G standards to protect its physical and virtual borders, as well as working with allies to deploy 5G in developing nations, according to documents Axios reported as being prepared by a senior US government official.

AT&T will deploy 5G services in a dozen markets by late 2018, with plans to extend its 5G Evolution advanced LTE from 23 to 'hundreds' of metro areas while also expanding AT&T Fiber to 82 metros by mid-2019.

Verizon to use Samsung for first commercial 5G network rollout

Verizon's first commercial 5G rollout will begin in Sacramento during the latter half of 2018.

Ericsson has added an indoor small cell solution to its 5G portfolio, with the 5G Radio Dot to be tested at the end of this year ahead of commercial availability in 2019.

A panel of experts at CES 2018 discussed 5G's impact on next-gen tech like cloud computing and self-driving cars.