It's been over a week since the Windows 8 launch in New York, and that means it's been 12 days since I bought a 64GB Surface RT device with a Touch Cover in Microsoft's Times Square pop-up store .

It's been a week of travel, of conferences and meetings, of small hotel rooms and sleeping in friends' spare rooms and on sofa beds. In short, pretty much the ideal circumstances to get to grip with a new device. In fact, the ideal circumstance to use it in anger and write a 1,300 word post in coffeshops and motels on the long drive from Seattle to Las Vegas.

It really is a carry-along PC, much more a laptop replacement and companion than a traditional tablet.

The first thing you notice about Surfac e is the packaging. There's been a trend to simplicity in Microsoft hardware's design language, and Surface's box is part of that trend. Don't expect anything fancy in the unboxing videos — it's just a cardboard box with a few words on it — including a clear note that Surface RT won't run all your desktop applications.

There's more than enough battery charge to get online and get set up — and to do at least half a day's work. You'll need a Wi-Fi connection to start the sync with your Microsoft Account, which can take some time over slow Manhattan motel connections.

Surface itself is light , and easy to carry thanks to its chamfered edges. It's about the same weight as a naked iPad, and with the TouchCover is lighter than an iPad in a third-party case. The 16:9 form factor is very different — it's naturally landscape, not portrait, and the batteries are placed to balance it nicely in two hands, ready for thumb-typing.

We'll need to wait for third-party cases for Surface, because it's not even worth trying to squeeze a wide-screen device like Surface into an iPad case.

The TouchCover is Microsoft's main selling point for the Surface, and it turns out to be surprisingly comfortable and easy to use. It does take a while to get used to just how you type on the pressure-sensitive keys, but for a relatively fast two-finger typist like me it's only an hour or two before you're typing at 70 to 80 percent of your normal keyboard speed — which for me is also about twice my speed on a screen keyboard.

I also spent time with the more normal-looking TypeCover, but found myself going back to the TouchCover again and again — it was easier to use, and more amenable to my hard-hitting two-fingered typing style. 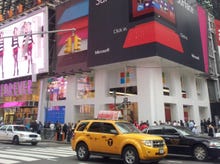 It is possible to use Surface on your lap, but it's not the most comfortable typing position, and you do need to get used to how the TouchCover flexes as you type. One option is to type with the Surface on your lap with the kickstand folded away. It's a reasonable way to use the Surface when taking notes, when you don't need to look at the screen — but it's a lot easier to put it on a table or a desk when you're interacting with applications.

Of course there's also the option to use the on-screen keyboard, and there I've found the split-keyboard option good for taking notes via thumb-typing while talking to people, or for when you don't have much space.

Perhaps the weakest part of the Surface design is the power connector. While it's magnetic, it's not the forceful click of the keyboard covers. You do need to seat it carefully, and there's a distinct preference for one specific orientation — which isn't the most obvious.

Even so, it doesn't take too long to get used to the connector, especially when you get the feel for the angle of the Surface's chamfered sides. You'll know you've made a connection when a small white LED in the L-shaped power connector starts glowing. Charging is fast, from flat to full in a couple of hours.

In anticipation of Surface, I'd spent the summer only using Windows Store applications on one of our test Windows 8 machines, so I knew that Windows RT would be able to handle most of my needs. As the Windows Store content ramped up in advance of launch, I was able to fill many of the gaps — including finding a good Google Reader-linked RSS reader, a version of OneNote, Skype, along with a good mix of travel tools and casual games. For basic system administration, I can use Remote Desktop to connect to my servers.

No matter how you think about Surface, one thing is clear: it needs to work with cloud services

Of course I've been able to use them all from my Android tablet, but I've been finding the Android UI less than intuitive, and for the past couple of months have been trying to control it with Windows 8 gestures.

The Galaxy Tab ended up relegated to the bedroom, where it picks up overnight emails for the morning, and lets me read webcomics in bed. That doesn't seem to be the destiny of my Surface, as it does one more thing.

What I've been looking in a tablet for years now has been something that's light, powerful, and above all, able to run Office. That's why my last four laptops have been tablet PCs. They've all been powerful, they've all run Office, but they have never ever been light. That's where Surface has the advantage.

It runs a version of Office with most of tools I need: Word, Excel, PowerPoint and OneNote. It's the non-commercial use Office Home and Student edition, but because I have an Office 365 Enterprise plan I have the licence needed to use them for commercial purposes.

While some have criticised Microsoft for removing VBA from Office RT, I don't need macros, so don't miss it at all. I suspect that most large-scale macro usage remains in Excel, and there Surface becomes an effective client for cloud or server-hosted Excel Services — which can run macros and deliver the data to Surface's Excel for reporting, analysis and viewing. Just remember to download the 500MB Office update to replace the bundled Office 2013 Preview with the final bits.

At its best with cloud services

No matter how you think about Surface, one thing is clear: it needs to work with cloud services. Office works best with SkyDrive to synchronise file between PCs and tablets, and phones. With SkyDrive and Office 365, Surface becomes a lightweight extension of your existing workflow, one that lets you pick it up and take it with you.

That means you do need a Wi-Fi connection, either direct or through a MiFi or a tethered mobile phone to get the most of Surface. Even so, it does work offline, as new documents are cached locally before uploading to SkyDrive as soon as you're back in Wi-Fi coverage.

Mark Anderson, the analyst behind the Strategic News Service mailing list, has been talking about the carry-along PC for many years. Carry-along PCs are small and light, fitting in a bag. They're instantly on, with access to information and to tools. They're not your primary PC, but they're the PC you have with you — ready to take notes, to handle email, or to waste a few moments with a game. They're what netbooks could have been, and what the current generation of tablets aspires to become.

That's certainly how I see my Surface. It's light, and if it's not yet got all the apps I use — or reasonable facsimiles thereof — in its Office suite, it's got the 20 percent that do 80 percent of what I need.

That means that if I don't want to carry my laptop with me, I can just grab the Surface, drop it in my backpack, and have a machine that will let me take notes, keep in touch with my social networks, write copy, read email — and play a few games as I go. It really is a carry-along PC, much more a laptop replacement and companion than a traditional tablet.

Join Discussion for: Surface RT: My week on the road with Microsoft's...