Mice keep getting reinvented and some new designs are radically different from the norm. One such is the Swiftpoint mouse, a tiny mouse designed for notebook users.
Written by First Take , Previews blog log-in on Dec. 21, 2010

Mice keep getting reinvented and some new designs are radically different from the norm. One such is the Swiftpoint mouse, a tiny mouse designed for notebook users.

It communicates with your notebook via a USB dock. This also charges the mouse, which sits on a connector and is held in place by a magnet. Swiftpoint suggests that this magnet is strong enough to secure the mouse to your notebook while you are on the move. We doubt you’ll want to carry it like this, though – the magnet isn’t that strong! 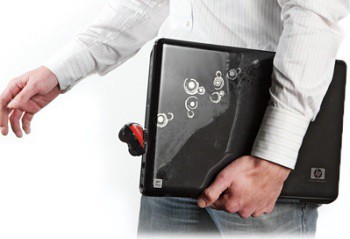 Still, at least you don’t have to worry too much about whether the suggested charging regime works. 90 minutes of charging for two to four weeks of life is pretty vague, but the suggested 30 second charge for up to one hour of use means you can pretty much charge as needed.

None of which matters, of course, if the Swiftpoint mouse doesn’t work for you. It is an odd looking device. Where standard mice tend to have a symmetrical design, equally good for right and left handed users, the Swiftpoint mouse is built decidedly off centre, with a slanted and angled central ridge. This means it can be gripped rather as you would grip a pencil with a slanted thumb. It felt comfy – but only in our right hand. Left handers may find it impossible to work with. 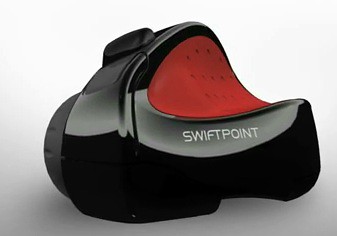 There are two buttons along the central ridge, one raised and one flush. The raised button is the right click button, the flush one is the left click button. The scroll wheel is on the right side of the device. You can turn it with your index finger for slow scrolling, say when reading a web page. Fast scrolling, when scanning a web page or document for the section you want, is achieved by putting the Swiftpoint mouse on its side and running the scroll wheel along the mousing surface. This is named ‘SlideScroll’.

It is easily changed. Press and hold both mouse buttons and the cursor will put itself at the bottom of the screen and start to move upwards. If you scroll in the direction you want to replicate up, the mouse will learn this. When you’ve moved away from your lounging position, you can reset ‘north’ in the same way.

The Swiftpoint mouse has an area on its right side called the SmartTouch sensor which registers you are holding it. You can set the mouse such that when there is no finger on this section the cursor does not move even when you move the mouse. In theory this lets you hold the Swiftpoint mouse while tapping the keyboard and not affect the cursor. It does work, but we found it rather fiddly. 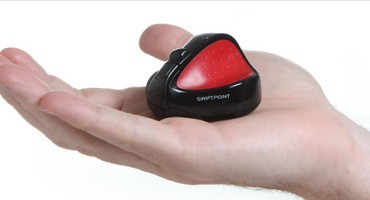 The Swiftpoint mouse comes with an accessory called the Parking Accessory. This is simply an adhesive strip with an embedded magnet against which you can dock the mouse using the same bottom based magnet that fixes it to its charger USB dock.

The logical parked position when you are using a notebook on your lap and working with the Swiftpoint mouse on the wrist rest is in the middle of the touchpad, which obscures the touchpad should you want to use it. The Parking Accessory’s magnet is small and you get plenty of adhesive plastic around it which you can cut to size, so that you can use it on something as small as a netbook if you require. We didn’t really take to it, and preferred to dock the Swiftpoint mouse on its USB point, where, of course, it boosted its internal battery.

A green light on the top of the Swiftpoint mouse indicates that it is communicating with its USB dock, and a second light is used occasionally when you are making settings, such as configuring the SmartTouch sensor.

The Swiftpoint mouse worked well enough for us and we found it more comfortable than using a trackpad. Its 1000 dpi optical sensor ensured responsive cursor movement around the screen, and we found the two buttons easy to use. Scrolling was fine too, as was zooming. It works up to 10 metres away from the screen, so you could use it to control presentations and suchlike from a distance.

We have quite small hands though, and those with larger hands may find it too small for comfort. In addition, we had to find a way to carry it and its USB dongle around when travelling, and it is not supplied with a carry case. A small drawstring bag does the trick, but that is an additional purchase.

If you don’t get on with it, at £49 the Swiftpoint mouse is quite an expensive gamble. But right handed notebook users who aren’t entirely happy with the touchpad and want an alternative might find it worth looking at. Left handed individuals should steer clear.

Razer's long-awaited wireless Viper Mini is here, but it might not be what you were expecting

The best 2-in-1 laptops: Top flexible, hybrid, and convertible notebooks