SXSW: An A Priori Gold Rush?

South by South West, the music and arts festival which also has an 'interactive' component starts next weekend, and I'm already getting irritated with it again.According to this year's websiteSouth by Southwest (SXSW, Inc.
Written by Oliver Marks on March 7, 2010 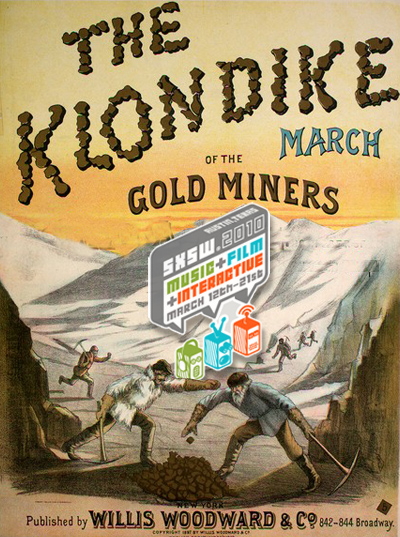 South by South West, the music and arts festival which also has an 'interactive' component starts next weekend, and I'm already getting irritated with it again.

South by Southwest (SXSW, Inc.) is a private company based in Austin, Texas, with a year-round staff of professionals dedicated to building and delivering conference and festival events for entertainment and related media industry professionals. Since 1987, SXSW has produced the internationally recognized Music and Media Conference & Festival.

In 1994 as the entertainment business adjusted to issues of future growth and development, SXSW added conferences and festivals for the film industry (SXSW Film) as well as for the blossoming interactive media (SXSW Interactive Festival). Now three industry events converge in Austin during a Texas-sized week, mirroring the ever increasing convergence of entertainment/media outlets.

For the music industry this is an important event, with musicians networking and showcasing their creativity for label representation and people familiar with the business of exposing talent and finding retail channels for their live and recorded music. A similar scenario plays out  around the art and business of the rapidly evolving world of independent film.

The interactive part of the event showcases 'the best new websites, video games and startup ideas the community has to offer', and the whole event runs under the proposition 'Tomorrow Happens Here'.

I've never been to SXSW so perhaps I'm being unduly harsh, but from my perspective the attempted confluence of the selling of creative arts with the online marketing profession doesn't help either group.

This quote in the promo blurb encapsulates the problem for me:

"If you haven't yet attended SXSW, you need to. Plan for it now. Do whatever you have to to convince your higher ups it's worthwhile. Everything is changing. Advertising is dying. Come to SXSW® and see where things are going next." Adrants, March 20, 2009

For some reason 2010 seems to be the year of the crystal ball gazer: tomorrow is a much buzzier, more exciting place to be than the more mundane tasks of this Monday morning, with deadlines and commitments. Where this gets really tricky is around the enterprise software world, which isn't likely to spawn many 'Rock Stars' in the near future despite the embarrassing usage of that term by the business press to describe successful people.

The huge challenge we face when we are exposed to over confident proclamations about how the world is changing and where it's going is the timeless philosophical problem around the difference between a priori and a posteriori knowledge and experience.

Wikipedia: The terms a priori ("prior to") and a posteriori ("subsequent to") are used in philosophy to distinguish two types of knowledge, justifications or arguments. A priori knowledge or justification is independent of experience (for example 'All bachelors are unmarried'); a posteriori knowledge or justification is dependent on experience or empirical evidence (for example 'Some bachelors are very happy'). A priori justification makes reference to experience; but the issue concerns how one knows the proposition or claim in question—what justifies or grounds one's belief in it. For music and film creativity, an a priori vision into human emotions and ground breaking thinking is essential to explore new creative ground, and once those new ideas are successfully sold and consumed by a mass audience they are typically recycled as advertising and marketing.

Both creative and business types in the creative professions travel to Texas for SXSW hoping to strike gold, much like the Canadian Klondike gold rush (which ultimately spawned the sheet music 'Klondike March' above - a musical hit at the turn of the 20th century).

Social media and digital marketing mavens regularly include business collaboration technologies into their a priori knowledge ('independent of any experience...') of how they think businesses work, and this can be enormously confusing and counter productive for people attempting to get their arms around modern technologies.

The amount of noise that comes out of SXSW every year on this topic both during and after is disturbing, particularly when mile wide, inch deep ideas gain credibility and get rolled up into fashionable, of the moment and futuristic thinking by social media personalities. (To be fair some good thinking usually comes out of the event also).

Busy business people looking for solutions to problems online can sometimes fall for simplistic frameworks and thinking which has never been anywhere near practical use, measurement or results. The tech world is plagued by media industry folks who know what the future holds ("Advertising is dying. Come to SXSW® and see where things are going next....").

You know there's a problem when futurist Twitter hustlers congregate on Austin to impress each other with karaoke renditions of past musical hits at an event that was originally all about sorting through a sea of musical hopefuls to find genuine musical creativity and business value.