Dropbox, Google Drive, OneDrive, and the other cloud drive services have shown considerable growth over the past few years because they're just so incredibly useful. The ability to both store files in the cloud and access them on the desktop has proven a boon for file sharing, collaboration, mobile access, and flexibility.

In most cases, the architectural model for these services is synchronization. Once you install a program on your desktop, a virtual directory or drive is created. Files placed in that virtual space are automatically synchronized with files in the cloud, so that you essentially have a local copy and a cloud copy of the same files and folder structure.

Some services, like Dropbox, allow for selective syncing. This accommodates the trend to smaller SSD storage on laptops. With selective synchronization, you can choose which cloud folders you want to bring down to your local machine. You might have a terabyte of Dropbox storage, but only a 128GB SSD, so you need to pick and choose what you need on the local machine.

Here at Camp David, we have a few laptops and Mac minis with minimal on-machine storage. We also have a few super-sized machines with lots of direct storage. My main iMac desktop has its internal one terabyte of flash storage, and 32 terabytes of direct-attached storage. Remaining functional with such a wide range of extremes requires creativity.

For years, our way of handling local business storage was a local file server. Our first file server was an old NT machine, which moved to a Windows 2001 Server, spent some time as a Linux box, transitioned to a huge tower with ten drives all pooled together, and eventually wound up on a Drobo. Just recently, we added a Synology DS916+ to the mix. (Unboxing video below.) 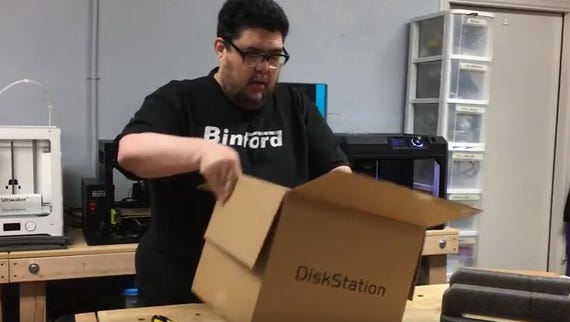 The local file server works great. We have gigabit Ethernet wired through the house, so shares perform almost as fast as local hard drives. SSDs, of course, are considerably faster, but we didn't start deploying SSDs until just a few years ago. Even machines with the smallest local drives are able to access very large shares, making file access easy and convenient.

When working in our home office, file access through the server was nearly ideal. But access outside of the house was inconvenient. From time-to-time, for special needs, I set up a VPN and tunneled into our servers from remote locations. But that was a pain.

I also found that trying to remote mount a server share proved nearly impossible from various iPhone apps. Because of how iOS sandboxes its filesystem, apps can only pull from their own storage, or, more and more often, Dropbox. Dropbox has effectively become the cloud drive for iOS, far more even than iCloud's own, relatively dysfunctional iCloud Drive.

It's been more than a year since I merged my Desktop and Document folders on my various machines into Dropbox. What if we did the same with our server shares?

There are limits, of course. I wrote a critique a few months ago about the cloud storage ceiling most cloud vendors impose on very small businesses.

Even so, what got me thinking is when I discovered the Cloud Sync service offered as part of the Synology NAS line. The company claimed to be able to sync from various cloud storage services to NAS shares.

If we (my wife and I) could sync our various premium cloud storage accounts for Dropbox, Google Drive, and Amazon Drive to local shares, it would open up all sorts of possibilities.

So when Synology sent me the DS916+, I decided to take a look at how they'd implemented their Cloud Sync service. I didn't have high hopes, because I've found that most small business offerings err on the side of supposedly easy to use over capability, and also because hardware vendors, especially storage vendors, tend not to have an affinity for making great software.

Synology's implementation of Cloud Sync blew me away. It is simple, crisp, functional, deeply capable, and works. You can sync multiple cloud services, with multiple accounts per service, and multiple folders per account. This is just as it should be.

Setup is duh-simple. Once you install the Cloud Sync app from Synology's package manager (their app store), you simply enable a cloud service for each account you want. We have one Amazon Drive account enabled, two Dropbox accounts enabled, and one Google Drive account (so far) enabled.

Now (once all the files sync, which can take a while), you'll have local shares and cloud files. I'm uploading about 160GB per day, so it will take a week or so for my Dropbox and Google Drive accounts to fully sync. But once they're updated, changes made locally on a share will be available in the cloud within a short time.

I'm also using Synology's Hyper Backup to back up other shares to Amazon Drive. Amazon Drive allows for unlimited storage use, so I'm able to keep a bunch of revisions. In fact, I'm backing up the Dropbox and Google Drive data to Amazon Drive, so that in case something happens with one cloud service, I have a backup on the others.

Stay tuned. In a future article, I'll take you through my entire storage architecture.