Taylor looking at embedding sensors and smarts in concrete 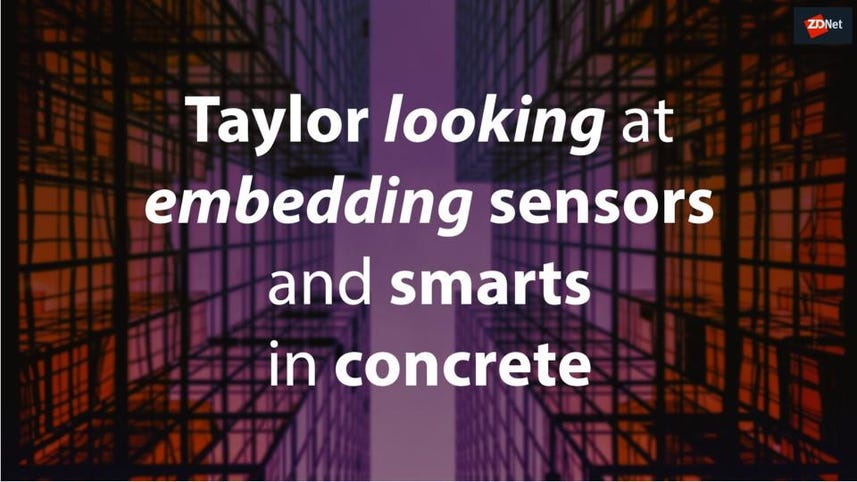 Australian construction firm Taylor is looking into the use of sensors in the buildings it constructs to provide data on concrete gradings and weaknesses to customers once they are done.

Speaking on a panel at Telstra Vantage in Melbourne on Thursday, Taylor IT manager Christian Neyle addressed the future of building inspections and touched on the recent Mascot Towers saga that has left owners with a AU$20 million repair bill after the apartment block began to crack.

"We're looking at technologies whereby we can put smart sensors and augmented reality into the building structure itself," he said.

"So that even after the lifecycle is handed past the builder, the customer can come along with their iPads and see the structural steel behind the walls, they can see the information and actually check concrete gradings, and find out if there are any weaknesses that could have been seen earlier in the process.

"So we're really getting that experience back into customer's hands rather than just keeping it proprietary to ourselves."

Customers are requesting more data from Taylor, Neyle said, such as the environmental impact of the build or how much waste is generated, and the company is looking to embed technology into the building to get that data.

"Even the concrete itself, right down to the structural steel, the formwork, the actual machinery we use to build it, and how that information reports back to our central monitoring, and we can then relay that back in real time to the clients," he said.

"It's all driven by this connected world that we are headed towards and 5G is the crucial tools that we need to be able to take from that."

Taylor is also reducing the lead time for its construction sites by switching from fixed broadband to Wi-Fi.

"We found that in the past and amongst a number of our peers in the industry, generally when you start a project in the field, you can be waiting sometimes five to six weeks to get a fibre connection out there or longer -- particularly if you need that low latency and the requirement of the job site [is] to be handling these massive amounts of data that we are seeing," he said.

"Once the construction site shed itself has power, they can connect one of these devices and instantly get their Wi-Fi on-site."

Consequently, the wait time has moved from 5 to 6 weeks down to under a fortnight.

Also speaking on the panel was Commonwealth Bank of Australia executive general manager of IT delivery and availability Mark Vudrag, who laid out the mixture of old and new the bank has to deal with.

"We have a legacy environment that we committed to and we also have a new modern tech environment that we're continuing to develop ... we have an internal infrastructure and data centres and offices that we have to support," Vudrag said.

"We do that through a mixture of legacy wired networks, wireless networks, 3G networks. But all of those spaces really are ripe for transformation."

Even the bank's workspace could use a bit of network hurry-up, according to Vudrag.

"When you look at our staff, we have some really great modern workspaces, where people are free to move and sit where they like, but we haven't quite got a network that supports that," he said.

"So there's a lot of opportunities there for wireless, increased levels of bandwidth and lower latency to ramp up the capabilities that we can offer to our staff. The payments network, the ATM network, and then most importantly, I think for us, where we see immediate benefits for something like 5G is in our branch network."

At the start of the year, Telstra and Commbank said the pair would trial 5G during 2019.

Ericsson ANZ head Emilio Romeo told ZDNet at the time that some of the 5G use cases that the trial will look at included exploring different network architectures such as network slicing, dynamic orchestration, and control use plane separation.

At Vantage, Telstra spoke of 5G allowing CBA to create a staff-less pop-up branch, with Telstra network engineering executive Channa Seneviratne saying he thought the sweet spot for 5G was in enterprise.

Vudrag added the bank saw opportunities for helping its mobile bankers with technology, for instance, by cutting down on hours of travel to simply get documents signed, as well as looking at the internet of things.

"Look, you wouldn't normally associate a bank with internet of things, but we are actually doing some work in that space," he said.

"Within our agribusiness area, in our asset management, asset sharing space, we're actually right now piloting putting some sensors on crop dusters, to the able to track usage. And you know, it's a pretty interesting and exciting opportunity for us."

Disclosure: Chris Duckett travelled to Telstra Vantage as a guest of Telstra

Microsoft and Telstra team up for business data sharing platform

Penn labels 5G as a strong growth engine for Telstra

With each generation of mobile technology, average revenue per user increases, and 5G should be no different, Telstra CEO Andy Penn said.

An initial 6.5 kilometre private network will be created for South32's Cannington mine.

Telstra places its IT services businesses under Purple banner

PCs
Federal courts hit by "significant and sophisticated" cyberattack in 2020