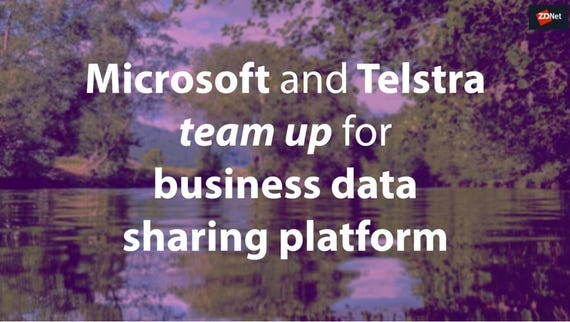 Telstra has teamed up with Microsoft to create its Telstra Data Hub product that will allow businesses to use, analyse, and share the data they generate.

The telco says 99% of data that is created in the course of doing business is not used, so the telco hopes the new platform will help businesses take better advantage of it.

Built on top of Azure, the platform will initially target use cases for water management, agribusiness, and connected supply chain.

Microsoft said the service is already being deployed to monitor water quality in Queensland's Lower Burdekin river, and Aldi is already an early adopter. Telstra said the tracking of shipments allowed the German giant to reduce the cost of missing cargo.

For the trial on the Lower Burdekin, both river quality and the quality of ground bores have been monitored.

Telstra also said the focus of the hub is transactional data, not personal data.

Microsoft Australia IoT and AI lead Matt Sinclair told ZDNet that the data and services will be located within Australia, allowing customers to handle data sovereignty as needed.

Although the telco said it had paying customers, Telstra would not disclose when the hub would become generally available to businesses.

The announcement at Telstra's Vantage conference arrived a day after the telco announced it was placing its existing IT services businesses under a single banner dubbed Purple.

Former brands and companies in the market such such as VMTech, MSC, Readify, Kloud, Bridgepoint, O2, NSC, iVision, and Company85 will be retired under the consolidation, which will cover over 1,500 employees that work on more than 8,000 projects annually, the telco said.

Telstra explained during its Vantage conference keynote that it came up with the name by chopping the front half of purpose with the back end of people to form Purple.

Disclosure: Chris Duckett travelled to Telstra Vantage as a guest of Telstra

Join Discussion for: Microsoft and Telstra team up for business...