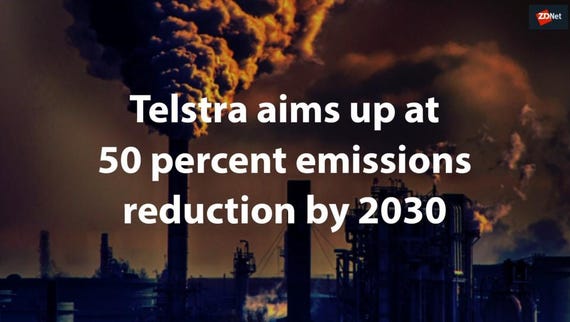 Telstra aims up at 50% emissions reduction by 2030
Watch Now

Australia's incumbent telecommunications carrier released new climate change targets on Wednesday, with a target of reducing its absolute emissions by 50% in 2030.

The company is wanting to be carbon neutral for its operations this year and has plans of "enabling renewable energy generation" equal to its energy consumption by 2025.

To reach its 2020 neutrality target, Telstra will be purchasing carbon offsets, and by 2025, wants to own or have contracted enough renewable energy to power its operations.

"Telstra is one of the largest consumers of power in the country. Powering networks to cover a continent this big so that millions of Australians stay connected requires something in the order of 5.9 petajoules of energy each year and last year that resulted in nearly 1.3 million tonnes of greenhouse gas emissions," Telstra CEO Andy Penn said.

"I recently said climate change would be the defining challenge of the 2020's. I stand by that comment, conscious there will be other issues to challenges us. Events including Australia's Black Summer of bushfires have raised urgent questions in the community about what climate change means and, more importantly, what must be done.

"The science is clear. Climate change, driven by greenhouse gas emissions, is creating risks that impact our economy, our environment, our communities and each of us individually."

Penn added the telco reduced its greenhouse gas emission intensity by 24% in fiscal year 2018, and its absolute emissions fell by 4% over that same period. It also invested in a 226MW wind farm via a consortium during that period.

The Telstra CEO said the time for action is now.

This view is in contrast to the one emanating out of Canberra, where the Australian government remains determined to be the only country to use carryover credits to reach its international climate obligations, while also placing a lot of its faith in technology to help reach its targets in accordance with the Paris Agreement.

It has not stated which technologies it believes will get it there, however, and it does not yet have a plan to address climate change.

Join Discussion for: Telstra aims up at 50% emissions reduction...