Full Bio
Posted in DIY-IT on April 6, 2020 | Topic: Working from home: The future of business is remote 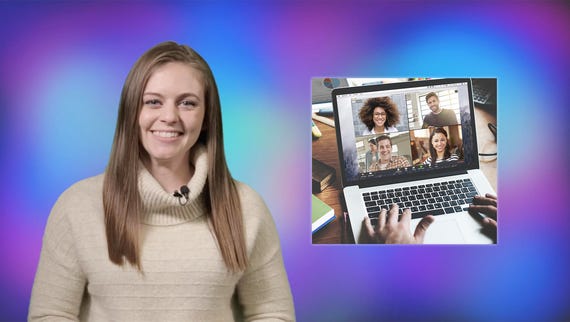 Remote working 101: Professional's guide to the tools of the trade Mastering remote work is all about finding the right tools to stay productive and connected. This guide will have you and your team synchronized and working in harmony, wherever you happen to be.

With folks all over the world sheltering in place at home, there's been a huge rise in video teleconferencing. While there are a lot of great resources for setting up and making teleconferencing work, some people I've talked to are still concerned with just how to get through a conference without messing up, while others have asked me how to up their game now that they're conferencing regularly.

I've probably done a thousand or more webcasts, radio interviews, TV interviews, and teleconferences. Over the years I've developed ten golden rules. They work well and are easy to adopt. I think you'll find them helpful.

So let's get started.

When I first started, I had stage fright. It was weird, because I've given lots of classes, lectures, and speeches in front of audiences large and small and never had stage fright. But faced with a microphone in my office and an unseen audience somewhere "out there," I got pretty anxious. Audio conferences were the hardest. With video, I could see my audience, and that helped a lot.

I eventually came to realize that it's still just talking and teaching, but over a different medium. When I talk, I imagine I'm speaking to a favorite friend or student, and that modulates both my voice and my nerves. When you picture one or two people and talk online as if you're talking to them in person, everything gets easier.

Sound quality is surprisingly important for these things. Scratches or static can be incredibly annoying. It's actually OK to have lower quality video, but lower quality audio can be a conference killer.

You don't need a super-fancy, expensive mic. But don't plant your computer three feet away and hope the built-in mic will pick you up. It will create an echo that's annoying to most listeners. Instead, use a separate mic, whether that's the earbuds from your phone or an add-on mic. I recommended the Blue Yeti in my ultimate home office article, but you can get by with many different choices. For years, I used this $9 clip-on lavalier mic and and it worked quite well. So you don't need much to up your game.

It's better to have lower resolution video than choppy video. Most home broadband feeds don't have a heck of a lot of upload bandwidth, and if you're using a cable modem, you're going to be sharing that bandwidth with your neighbors. Unless you know you have boatloads of bandwidth, set your camera resolution to 720p. It'll be fine.

When I first started with video interviews, I wore my suit. I thought I had to be "professional." But when both Fox News and CNN asked me to take off my tie because it was scrunching up my chin, I learned it was okay to tone down my look. I eventually dropped the jacket because it bunched up when sitting. Now, I almost always do video in a dark T-shirt because that's what looks best. Once in a while, I'll put on the blue button-down shirt, because blue looks better on video than white.

The key to this is to dress simply. Patterns can look terrible in a video player and white tends to either look over exposed or dirty. If you wear what you'd wear when meeting with the same folks in person, you'll generally be fine. Just test in-camera and if you run into snags (like my jacket that bunched up), make some minor changes.

This connects back to the previous Golden Rule. You do not need to have a fancy haircut or coiffure. But it does need to be neat. Don't go straight from waking up into a teleconference (yes, I'm talking to you). Give yourself time to take a shower, comb your hair, and otherwise get cleaned up.

This will become more and more important as our sheltering-in-place continues. My hair, when long, makes me look more like a werewolf than a human. But if I wash it and brush it, it will usually remain tamed for the hour or so I need to be on the air. Don't sweat the length. People will be understanding since we're all in this together.

6. Clean up your background

You do not need a set. A simple, blank wall is perfectly okay. There are a few things to keep in mind. Avoid a window or bright light source behind you because it will cause the camera to struggle. Check to make sure you don't have anything confidential visible on a bulletin board or a white board. Try to avoid a wildly cluttered background.

I've done national TV interviews on the floor of a bathroom during the middle of a move, where only a plain wall was visible behind me. I've done video conferences in the middle of a doctor's appointment simply by putting the door to the examination room behind me. I've done video interviews in hotel room corners, just sitting in the guest chair. The corner added a bit of dimension to the shot.

My point is, fancy isn't necessary, but clean and neat is. If you're doing this in your bedroom, make your bed and pick up your clothes. What the camera sees is what matters most.

7. Pause to let others speak

Your honor, guilty as charged. This is probably where I have the most difficulty. I sometimes get started on a topic and just keep on going, leaving no room for the host to get a word in edgewise. Fortunately, there is a simple way to solve this.

Just take a breath at the end of every sentence. When you finish a thought, take a breath and count one-one-thousand, two-one-thousand in your head before continuing. These two pauses give others in your call time to jump in if they have something to say.

8. Coordinate with your family

Working from home is particularly challenging, especially when you have young kids, your spouse, extended family, roommates, and puppies there as well. While it's impossible to negotiate with babies and puppies (and sometimes parents - trust me, I know this), you can coordinate with older kids and partners.

In general, there are two kinds of meetings: those where background noise is acceptable (if annoying) and those where it's not. When chatting with a PR firm pitching me on a product, it's okay if my puppy yaps in the background. When doing an interview that'll be seen by a thousand people all over the world, that noise is not okay. In the second case, my wife takes the dog out, or now, to a separate part of the house so there's quiet for my on-air time.

You can do this with your family. Ask for their help, and if they have to keep kids, parents, and animals occupied while you're on the air, they'll feel good about helping and you'll be more relaxed while in your meeting. Right now, also, don't sweat it too much. Fortunately, since everyone is in the same boat, most folks will understand what you're going through.

9. Test before your conference

Lack of testing is the conference killer. I can't tell you how many meetings and interviews failed because the people I was working with didn't test their gear. One interview failed completely because, although the guy did do a complete test, he then moved to a different office with a different setup for the actual interview. He was convinced he did it right because he tested, but had a tough time comprehending that the goal was to test using the gear you're going to use. And he was a Senior VP at a top tech firm.

You're going to need to test for both gear and set. By this, I mean make sure your sound and video work, that you've installed all the necessary updates before your meeting, and that the technology is solid. Then connect with a friend, family member, or the host to check out how you look on video and how your voice sounds.

I recommend doing this the day before or morning of your tele-video event. Waiting too long will often cause your configuration to change, but doing it too close to your meeting might not give you enough time to make fixes if necessary.

10. Think before you speak

My very first suggestion was to relax, but I'll end this list with an opposite suggestion: think. You don't want to blabber in these sessions. You don't want to use profanity. You want to sound like you have a clue. So just take a second to pause and think, then speak. It's also not a bad idea to make some notes or create a cheat sheet so you have something to refer to as you're talking. Just try not to be too obvious about the glances down at your notes.

Bonus tip: eat (but not a lot) before you start

This isn't as much a Golden Rule as it is a good tip. Make sure you eat something before you start, but don't eat too much, or anything that's too heavy. You want to keep your stomach from growling enough to be picked up on your mic, but not so much that you can't make it through your session without, you know, needing to go to the Oval Office.

Similarly, always bring something to drink into your session, but drink in sips. You want to keep your throat from getting dry, but you, once again, want to make sure you don't feel the urge to, so to speak, flush your buffers.

What about you? Do you have any great Golden Rules to share for having successful video conferences? How are you doing? Have you been having more conferences during this lockdown? Feel free to share in the comments below.