Apple and the FBI could be gearing up for another legal battle after authorities admitted they cannot get access to the phone that belonged to the Texas church gunman. 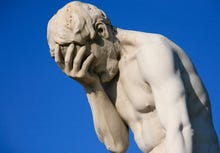 US attorney general just called for responsible encryption. Don't fall for it. You only need to look at the past year of data breaches, leaks, and exposures to see that some of the most precious national security and technological secrets in the US aren't safe.

FBI special agent in charge Chris Combs told reporters Tuesday that the agency was trying to analyze the phone used by the gunman, Devin Kelley, in an effort to understand the motives of the attack on the First Baptist Church in Sutherland Springs on Sunday, in which the shooter opened fire and killed 26 people and wounded 20 more.

According to sister-site CBS News, the FBI flew the phone, obtained through a search warrant, to FBI headquarters.

But so far investigators have been unable to get into the device because it's encrypted, said Combs.

Combs wouldn't say what kind of phone the gunman had. ZDNet has independently confirmed that the shooter's phone was an iPhone, adding to an earlier report by The Washington Post.

Apple and the FBI had engaged in preliminary conversations about the device after Apple first heard news that a device was encrypted from Tuesday's press conference, but no formal request for assistance has been made by the FBI.

It's understood that FBI agents were trying to see if there are other ways to access the phone's data, such as through a backup of the phone's contents.

That delay could have scuppered the agency's chance of gaining easy access to the iPhone, had the shooter used a fingerprint to unlock the phone. After two days of not using the device, the fingerprint sensor switches off and the phone reverts to a passcode.

Apple said in a statement to ZDNet that it was "shocked and saddened by the violence in Texas last Sunday, and we join the world in grieving for the families and community that lost so many loved ones".

"Our team immediately reached out to the FBI after learning from their press conference on Tuesday that investigators were trying to access a mobile phone," the statement said. "We offered assistance and said we would expedite our response to any legal process they send us."

The company added that it works with law enforcement every day, not least to offer training to thousands of agents to help understand how to quickly request information from the company.

The case is reminiscent of the Apple-FBI legal feud last year, in which the Justice Dept. sought to compel Apple to build a backdoor to bypass the encryption on the iPhone that belonged to Syed Farook, who with his wife Tashfeen Malik shot and killed 14 people in San Bernardino, California in December 2015.

But the courts fell short of deciding whether or not companies like Apple could be forced to provide access to encrypted devices because the FBI found hackers who were able to obtain the data from the shooter's phone.

Following a lawsuit by news organizations to reveal details of how the FBI obtained the data, a court ruled last month that the agency can keep the name of the hackers and the price of their work a secret.

The FBI continues to maintain that encryption "impacts investigations," according to FBI director Christopher Wray.

Wray said the agency had more than 6,900 mobile devices in the past year that it couldn't access, but would not say how many investigations were directly harmed as a result.