The best of both worlds: Adaptec MaxIQ SSD caching

Solid State Drives (SSDs) are far faster than hard disk drives; they also use less power and generate less heat, but are far more expensive (especially for the enterprise-grade Single Layer Cell, or SLC units). Capacities are also limited, and while all hard drives will fail at some point, SSDs have a fixed lifecycle of read-write cycles.
Written by First Take , Previews blog log-in on Sept. 14, 2009

Solid State Drives (SSDs) are far faster than hard disk drives; they also use less power and generate less heat, but are far more expensive (especially for the enterprise-grade Single Layer Cell, or SLC units). Capacities are also limited, and while all hard drives will fail at some point, SSDs have a fixed lifecycle of read-write cycles. That makes it impractical to replace all the storage in your datacentre with SSDs, but although the capacity of hard drives keeps going up and the price per GB is still dropping, I/O speeds are lagging far behind.

Adaptec's new MaxIQ offering is an elegant solution; it capitalises on the fact that Adaptec's RAID controllers see the data being requested from the disk drives. The MaxIQ software is an upgrade for any Series 2 or Series 5 controller; it builds up a list of the 'hot' data that's frequently requested and puts a copy of it on a 32GB Intel X25-E SLC SSD for faster retrieval. The SSD is effectively acting as a very large disk cache; Adaptec refers to the system as a 'high-performance hybrid array' and claims significant speed increases. 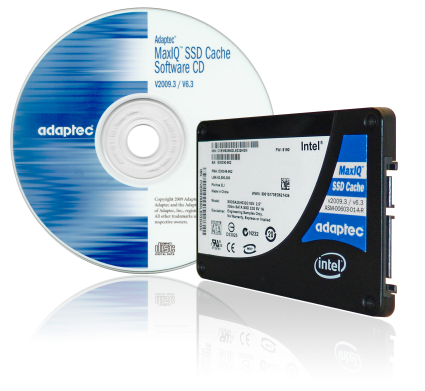 The maxIQ kit is a combination of SSD and software

On Adaptec's test system with 12 50,000rpm SAS hard drives, online transaction processing was four times faster with MaxIQ, as was general file serving, while web server performance was five times faster. That adds up to throughput of 1.2GB/sec and up to 20,000 IOPS. To deliver the same performance with hard drives alone you'd need a hundred drives, claims Adaptec CEO S 'Sundi' Sundaresh, which would be a waste of capacity if you don't need that much storage as well as raising your operational costs. The MaxIQ software includes power management, reducing the hard drives' spin speed or powering them down altogether.

With the SSD cache you don't need to buy read-intensive drives, so you can choose SATA rather than SAS drives for a further saving. Sundaresh calculates that the £790 MaxIQ upgrade is half the hardware cost of a hard-drive-only system that delivers similar IOPS/GB. "And while we can't solve the lifecycle issues of SSD," he says, "we can definitely solve the data protection elements of that." 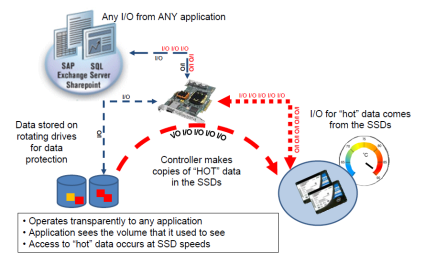 Data is always on the original hard drives as a backup

The combination of SSD and hard drive is so logical it's surprising no manufacturer has thought of this before (although a number of financial organisations have been building their own custom solutions). Hybrid hard drives failed in the desktop and notebook market because even a small extra cost is a problem for price-sensitive consumers, and because they left the task of choosing what data to cache to the operating system.

Businesses are more likely to see the value in a hybrid approach. Because MaxIQ runs on the RAID controller, the storage looks the same to whatever software and operating system you're using, so there's little worry about integration. Quite how much of a performance increase you'll see will vary from application to application and from data set to data set, and overall performance gains may not match the raw throughput improvement. Even so, these are still impressive results for this price tag.