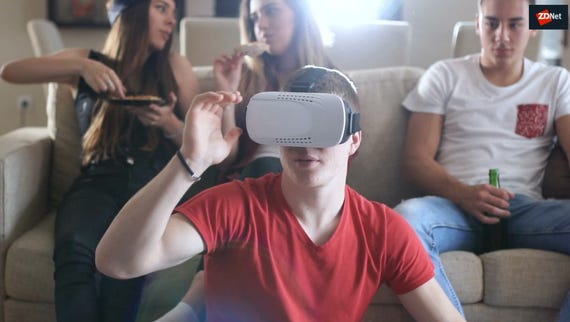 The next big trend: Gesture-controlled devices are the future
Watch Now

Ahem ... Minority Report. That obligatory reference out of the way, let's talk gesture control. A new forecast from Research & Markets is predicting a sharp rise in the global gesture recognition market from USD 5.4 billion today to 23.5 billion in 2023.

Forecasts like these are always optimistic, but it is true that a confluence of technologies and market trends seem to be marching us toward some very cool gesture-based user interfaces.

Perceptual User Interfaces (PUI) in mobile devices are one of the big market factors. The facial recognition and voice recognition now standard on many smartphones have habituated end users to touch-free control. Limited gesture recognition already exists on even mid-range phones.

On the technology side, the gaming industry has been on the cutting edge of gesture control. Motion control gaming is now standard on consoles from Microsoft, Sony, and Nintendo.

Also: Doom on the Switch shows motion controls still have a place CNET

Each of those companies has developed on a foundation of falling sensor prices and the shrinking sizes of Microelectromechanical Devices (MEMS), such as magnetometers, accelerometers, and gyroscopes.

The two games that most famously epitomize gesture recognition are Temple Run and Pokémon Go, both of which seemed to spur a wave of developer activity, which of course is the currency of the realm when it comes to technology adoption these days.

With the continuing growth of AR and VR, the use of location sensing, eye tracking, and even lip reading will only grow. That technology is sure to migrate from gaming to personal computing and all sorts of Internet of Things and connected home applications.

Some of the big players in the space have recently introduced technology components necessary for advanced gesture control that are just now debuting in consumer tech. In mid-2017, for example, Omron Corporation rolled out a super-sensitive MEMS thermal sensor that provides highly accurate non-contact measurements of objects.

Then, late last year, Sony debuted its time-of-flight image sensor, which is back illuminated and measures how quickly light is bounced off an object to read depth at minute detail.

With those pieces in place, and with segments of the consumer market already signaling a willingness to go hands free, it certainly seems likely that a certain Sci-Fi Tom Cruise vehicle will prove technologically prescient.

Join Discussion for: The end of buttons and touchscreens? Gesture...