The nonprofit behind the world's largest AR expo has announced plans to promote an Open AR Cloud (AKA "the most important software infrastructure in computing")
Written by Greg Nichols, Contributing Writer on June 7, 2018 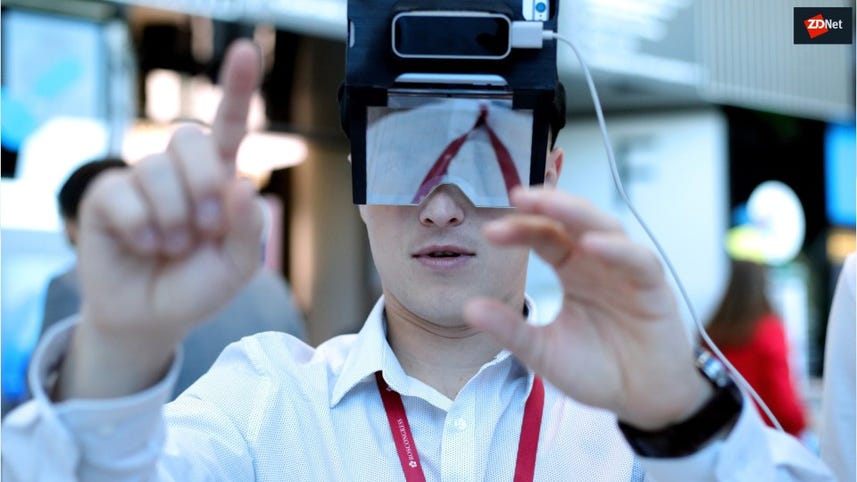 The non profit behind the leading AR+VR conference and expo has announced a major initiative to promote an Open AR Cloud.

You'd be forgiven for having no idea what that is, but it's a concept you should familiarize yourself with. You'll certainly be hearing about it a lot in the months and years to come.

The craziest thing about that statement may just be that a lot of very intelligent people believe it's true.

Described by some as the world's digital twin, the AR Cloud is essentially a digital copy of the real world that can be accessed by any user at any time.

To unpack that, it's helpful to use the more familiar concept of Google's pagerank.

What Google does, in simplest terms, is organize textual information and make it available to everyone with a browser. The web was built atop the incredible endeavor of organizing the world's written words.

But text has some pretty major limitations when it comes to conveying information. Biggest among them is that text is divorced from the reality we live in.

If I want to know the history of a building I'm looking at, I need to grab a device with a browser and transform that very real structure into a string of words (i.e., the name or location of the building). Same with a restaurant I'm walking by.

That's where the AR Cloud comes in. It won't be long before whatever device I have on me at the time (a smartphone or wearable, for example) will be equipped to tell me all I need to know about a building just by training a camera at it.

It's easy to envision looking at the Parthenon through a pair of AR glasses, for example, and having access to all sorts of information. I'll be able to look at a restaurant across the street and access the menu.

GPS has been a stand-in for that AR Cloud experience. On any enabled smartphone, GPS does a decent job figuring out what restaurant is over there, which gives me a clickable portal to access more information about it. Visual recognition of the storefront will be a much more precise alternative, and that's what the AR Cloud offers.

To be really useful, of course, that visual identification has to work not just on one or a handful of buildings and restaurants, but on the entire viewable world -- and, critically, it will have to work across devices, just as the internet does.

The question is, who will be in charge of cataloging the visual world and arranging all that information?

In the case of web indexing, there was a Wild West period where a bunch of competing companies took it upon themselves to organize the web's text. One company won out.

The stakes are much higher as we move toward visual computing. Imagine looking at a person and having instantaneous real-time access to all kinds of information about them, no name or search parameters required. It's a marketer's dream and a privacy proponent's nightmare.

Without question, Google's algorithm has changed the way the world is viewed by a large chunk of humans. That's unavoidable when we're all getting a lot of our information from a single source, one that, by definition, prioritizes some information over other information.

It's been big news recently that Facebook played a huge role in how people viewed candidates during the recent U.S. election (even if that revelation should surprise exactly no one).

As we move toward an augmented reality, one in which our view of the world literally passes through a screen that gives us constant real-time access to information, it becomes critical that we understand how that information is being prioritized and more urgent than ever that curation of our reality not be done in service to a company's bottom line.

"There is a growing concern in the industry that [the AR Cloud] could be controlled by corporations and also be fragmented across too many instances," says Inbar. "For this reason we are kicking off a historical endeavor to ask the XR industry to come together to collaborate on an Open AR Cloud that will act as a standardized, interoperable, and accessible foundation for all developers and creators to build upon."

The resiliency of the Open Source movement has been a remarkable testament to the vision of those at the vanguard during the early PC days, when corporate heavyweights first started fighting for control of our digital destiny.

If Inbar's assertion about the AR Cloud is correct, the biggest battles may lie just off the bow.

I'll be following AugmentedReality.org's efforts closely as it promotes collaboration on an Open AR Cloud.