In Barcelona, space technology companies have a special place to grow: in an area of protected wetlands not far from the Polytechnic University of Catalonia (UPC), and close to the sea, stands a bright and colorful building they call home.

In spite of the recession, last November the European Space Agency (ESA) launched the first Spanish Business Incubation Center (BIC) in Castelldefels, a town of just over 63,000 people.

NASA's 3-D printing breakthrough - it's all rocket science (images) A successful test may help NASA significantly lower the cost and reliability of expensive rocket engine parts by building them with a 3-D printer.

Its location near the city of Barcelona wasn't the only significant factor behind the ESA's decision to open the center there; Catalonia's expertise in space research was also crucial.

The region has links to a number of space missions including SMOS (Soil Moisture and Ocean Salinity satellite), designed to observe soil moisture over the Earth's land masses and salinity over its oceans; Gaia, created to chart a three-dimensional map of our galaxy; and Galileo, Europe's own global navigation satellite system, or Ariane. It's a little known fact that in 2006, the Ariane 5 rocket, called Ciutat de Barcelona, was launched using software made by a company based in the Catalan city.

The potential of the Catalan space industry is significant, especially in what the professionals call the 'downstream' segment, which involves space-enabled applications. "That's where the real business is," says Jorge Fuentes, manager of ESA BIC Barcelona - not that the 'upstream' segment, which usually generates more headlines because it describes everything launched into space, doesn't generate money and opportunities.

Catalonia is Spain's third-place region when it comes to the space industry, generating a turnover of €20m and employing 200 people.

Downstream, according to Fuentes, has high potential. "This will be a revolution," he says. That revolution will not only be felt in the area of navigation and positioning (GNSS) but also in Earth observation, which involves extracting valuable information from satellite photos to find out, for example, the yield of a cultivated field or whether there will be more jellyfish in summer.

The ESA incubator in Barcelona is managed by Barcelona Activa, Barcelona city council's local development agency, and locally supported by a number of public and private organisations. It wants to promote the space industry for a number of reasons: to benefit the entrepreneurial ecosystem in the area, support local talent, focus on the area's scientific and technical knowledge, create new opportunities and jobs, and become a reference area in Europe for the development of space technologies.

With this in mind, the center currently incubates eight companies which are working on projects related to drones (including Hemav), global maritime voice services at DSL prices (such as WSN), as well as data compression (DAPCOM) and renewable energy.

Four more companies are also set to gain approval to join the program. They are all recently created startups, usually under five years old, which have been carefully chosen. "We basically look for good business ventures, besides new products and services developed with space technology," says Fuentes.

Once accepted, the incubated companies have access to the technical and scientific knowledge of the Spain-based ESA team, the UPC's research experience, and advice from Barcelona Activa. Each company receives a financial incentive of up to €50,000 from the center, supplemented by €50,000 from Caixa Capital Risc (the venture capital fund manager for the bank LaCaixa), and then can also use other funding mechanisms from Barcelona Activa.

The program aims to eradicate the myth that it's difficult to find funding in Spain. "We have a good ecosystem of startups," Fuentes says. "A good ecosystem is one that gives you enough to keep you working, not to sit back and relax," he adds. 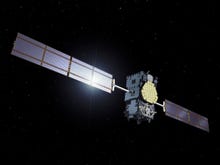 How the European Space Agency protects chips from cosmic radiation The ESA has detailed how its engineers design a processor that can operate within the high radiation environment of space.

For the ESA incubator's manager, however, beyond money, the key for the startups is business support. The program lasts two years so companies have to focus on hitting the big time pretty quickly, while acknowledging that there are sectors, such as biotechnology, where the road will be somewhat longer. After the two years are up, companies don't have to leave the incubator, however. They can stay at ESA BIC Barcelona as a part of continuity programs developed by Barcelona Activa.

The center is aiming to incubate 40 companies by 2018, and has already started a new selection process to add four new young businesses. The incubator's committee that will decide whether they're taken on meets this June.

Hemav is one of the incubatees: the company develops products for data and image processing using drone technology, and was the first company installed in the ESA premises.

The startup landed in Castelldefels with the boom of the drones in the audiovisual sector, just as the Spanish government regulated the use of such aircraft in non-urban areas. Hemav is targeting agriculture, through satellite tools that can help farmers make decisions using forecasts of pests or drought stress to help cut costs and boost productivity.

In 2014, Hemav raised €450,000 from an equity crowdfunding platform. At the time, the company was offering audiovisual services, an area that wasn't its forte. This year, the company restructured and diversified its product range, entering the construction sector with aerial surveying and the utilities sector with drones to inspect facilities that are often out of urban areas.

Hemav also expects new government regulations to be passed at the end of the year that will allow the use of drones in urban areas, allowing the company to develop new services. Now, the team has grown to 40 people, across offices in both Madrid and Extremadura (Western Spain), but there are no plans to leave Castelldefels for the moment.

Join Discussion for: The final frontier: Inside the Barcelona...