The automotive industry is expected to be the hardest hit by the current shortage of semiconductors.
Written by Daphne Leprince-Ringuet on June 28, 2021 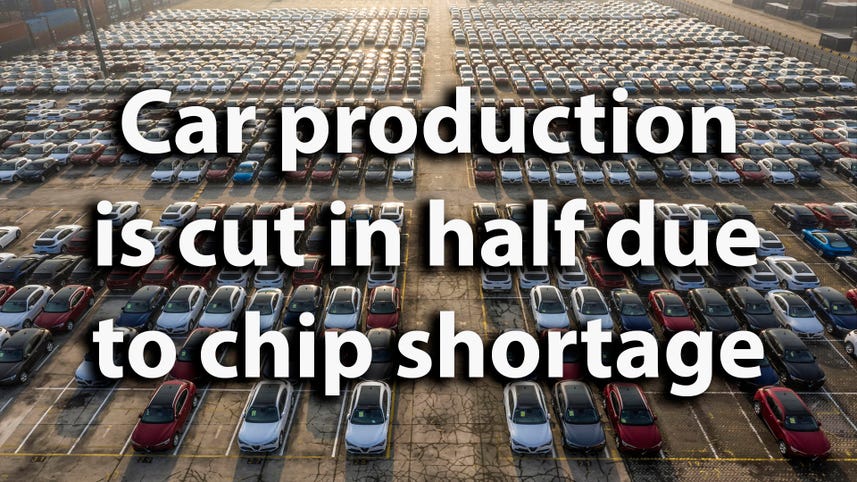 The production of cars in the UK has more than halved compared to the same period before the COVID-19 pandemic, due at least in part to an ongoing shortage of chips that are needed to power everything from engine management systems to in-car entertainment.

According to the Society of Motor Manufacturers and Traders (SMMT), this May car manufacturers produced almost 55,000 vehicles in the UK – a number that, at first glance, seems healthy in comparison to the meagre 5,314 cars that were produced in the same month of the previous year.

But 2020's statistics have to be put in context: with the COVID-19 pandemic rapidly gathering pace, factory lines came to a halt as most manufacturers decided to close their facilities altogether, in line with government guidance.

The automotive industry is now largely up and running again, but the first months of 2021 have been disappointing. To compare, in May 2019, car makers in the UK produced 116,035 vehicles – that is, more than twice as many as this year.

When compared with a five-year average, says the SMMT, production was down by 58% for the month.

Slower performance is due to a global shortage of semiconductors that is affecting car manufacturers first-hand.

The COVID-19 pandemic has caused a huge surge in the purchase of electronic devices like PCs and tablets, and silicon manufacturers like TSMC and Samsung have been unable to keep up with ever-expanding demand, resulting in a shortage that is now trickling down to virtually every industry that requires semiconductors.

Chips are central to the functioning of modern-day vehicles, and without access to the components, many automotive firms have been forced to slow down production.

Last April, for example, Jaguar Land Rover announced that it was temporarily shutting its two main car factories in the UK for a "limited period", while BMW suspended production at its Oxford Mini plant for three days. Both cited a shortage of components as the reason for the halt.

The issue is not restricted to the UK: car manufacturers worldwide have seen their supply chains massively disrupted by the shortage. Ford, for example, is expecting that it will lose up to half of its planned production in the second quarter of 2021, while General Motors has stated that losses caused by the lack of semiconductors could cost up to $2 billion in profit.

And since the shortage is not expected to subside until well into 2022, many automotive companies are having to rethink their manufacturing strategies.

The difficulty in finding chips is not only affecting the automotive industry: from smart home equipment to household appliances, many products are also likely to be impacted, if they aren't already. But it remains that car makers are expected to be the hardest hit by the crisis.

Back to the new normal: Everything you need to reopen your business

Social distancing and hygiene standards are going to change how modern businesses operate for the foreseeable future.

A recent report carried out by consultant KPMG anticipates that, while automakers account for only 10% of global semiconductor sales, they will suffer about 80% of the $125 billion in lost sales due to the shortage.

This is because car manufacturers rely on a "just-in-time" model when it comes to purchasing semiconductors, which means that they base their sourcing strategy on short-term forecasts. Last year, as factories closed, many firms canceled their chip orders, while other industries like smartphone or PC makers ramped up their demand. By the time car makers were ready to purchase semiconductors again, therefore, they found themselves at the back of the queue and far behind higher-paying equipment manufacturers.

"Auto companies are dealing with the fact that they are not only competing with each other, but every other company that uses similar chips on a cross-industry basis," says Kulik.

The automotive sector, therefore, is counting on government initiatives to ensure that a fairer distribution of semiconductors can be secured. Earlier this year, for instance, the Alliance for Automotive Innovation called on US president Biden to push efforts towards strengthening the country's domestic supply of chips.

With almost every industry currently fighting its case to access semiconductors, however, it is uncertain that chip manufacturers will start prioritizing car makers anytime soon. The Smart Payment Association (SPA), for example, recently stressed that failure to secure components will lead to huge disruptions in the production of payment cards, which could have serious consequences for businesses and consumers worldwide.