Full Bio
Posted in Between the Lines on May 14, 2013 | Topic: Enterprise Software

Microsoft Windows 8 has confused users and disappointed the PC industry. Windows chief Tami Reller all-but-admitted it last week. But, she also foreshadowed that help is on the way in Windows Blue. She confirmed that this Windows 8 update—which has now officially been dubbed Windows 8.1—will be previewed for users this summer and will go live in the fall.

While it's rumored that the Blue update will reinstate the much-missed Start menu and allow users to boot into the Desktop Mode, it's highly unlikely Microsoft will do the one thing that would best fix Windows 8: Separate the desktop and tablet versions. That would require a surgery equivalent of separating conjoined twins, but it would have a powerful effect on both Microsoft's upstart tablet business and its traditional desktop base.

We’ll talk more about why that would be such a great idea in a moment, but first let's take a quick look at the reality of where Windows 8 stands right now. 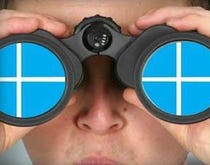 With Windows Blue, Microsoft may (finally) do the right thing

Call it capitulation. Call it listening to customers. But whatever you call it, making Windows 8 more usable with expected coming Blue tweaks is a positive, not a negative.

Reller tried to put a brave face on the Windows 8 debacle by reporting that Microsoft has sold 100 million licenses of the new operating system since its launch last October. That's a big number and it sounds impressive until you put it in perspective.

Again, that sounds fairly impressive until you consider how much Microsoft and its hardware partners push Windows 8 on all new PCs. In fact, it's almost impossible to buy a consumer PC without Windows 8. So, you may rightfully ask if that means that it's the enterprise that has rejected Windows 8. That's certainly a big part of the story.

Gartner pegs the global PC market as 47% consumer and 53% business. So if we assume virtually 100% of the consumer PCs sold were running Windows 8 then that would be 71 million (47% of 150 million). That would leave just 29 million Windows 8 machines sold to the enterprise. That means that only one-third of the Windows PCs sold to businesses have been running Windows 8 since its launch last October.

That's fairly consistent with a recent TechRepublic poll of 4,000 IT professionals in which only 15% of them said they have deployed Windows 8 or plan to deploy it in the future. In fact, the lower percentage in the TechRepublic poll probably points to the fact that there are some organizations that have bought PCs with Windows 8 on them but wiped them clean and installed Windows 7 instead, based on their enterprise licensing options.

So why has the enterprise turned against Windows 8? The bottom line is that the radical user interface change is too confusing and not productive enough. Even many of the IT leaders and companies who are inclined to like Windows and support Microsoft are frustrated with Windows 8.

In the comments to the TechRepublic poll mentioned above, user PeterM42, an IT consultant in Great Britain, summed up the attitude that pervaded many of the Windows 8 naysayers when he wrote, "Windows 8 on the desktop will not take off until the Metro 'toy' interface becomes an option as provided by the superb 'Classic Shell' software (or gets ditched altogether). Corporates [sic] do not want to pay the MASSIVE bill for retraining users to use something which basically is rubbish."

That brings us back to our main point. Ultimately, the biggest problem with Windows 8 is that it was based on a fundamentally mistaken assumption.

Windows 8 made a big bet that it could unite those two experiences with one machine. It built a platform to consolidate the tablet and the PC into one device that would be the future of computing. It was a worthy goal worth since it could have simplified things for many users and potentially saved them money by replacing two devices with one.

Unfortunately, it has turned out to be an untenable concept because PCs and tablets have opposite trade-offs. PCs generally need more raw computing cycles for multi-tasking, but typically aren't quite as concerned about power efficiency or portability. Tablets care more about how mobile they are and how power-efficient they can be. And, they are happy to trade raw power and multi-tasking for longevity and the singular focus of a mobile app. PCs can benefit from some touchscreen controls, but are still far more efficient using a mouse and keyboard, while tablets are most easily used with multi-touch interfaces, with occasional help from a keyboard. In other words... opposites.

So when Microsoft tried to combine the PC and the tablet in Windows 8 and forced the unified experience on all users, the result was that it compromised both the tablet and PC experiences.

If you were running an optimized Windows XP or Windows 7 desktop on a dual monitor setup and were accustomed to multitasking with a regular set of apps, then the tiled, touch-centric Modern UI made no sense as the default experience.

And, if you were running a touch-centric tablet powered by Windows 8, then it also made no sense that you had to jump into the traditional Desktop Mode environment to configure some of your settings, like starting a VPN connection. Try doing that with your finger as your pointing device. No fun.

Apple has certainly suffered from similar delusions to Microsoft at times. It has gradually tried to bring more and more iOS features into Mac OS X, but with varying degrees of success. Some of the iOS stuff doesn't make much sense (like much of the full screen capabilities) while others have added a few nice touches (like gesture support on trackpads).

It appears that Apple would love to completely ditch the boring old desktop platform, if it could. The company is clearly much more excited about its fresh new mobile platform. But, it has realized that the stodgy old platform is still the one that most developers and business people do most of their work on. Ironically, that includes most of the development work to build the shiny new mobile platform as well. And remember we're just talking about Macs here. There are over 10 times as many people trying to use Windows PCs to do real work.

In other words, Microsoft has to come to a similar realization. It needs to swallow its pride and do what it should have done from the beginning with Windows 8 and separate the desktop and tablet platforms.

If it took some of the best Desktop Mode and under-the-hood improvements to Windows 8—security hardening, faster boot, smoother software updating, better recovery and reinstall options, new virtualization features, and cloud integration—then it would have an excellent set of features to offer those upgrading from Windows XP or Windows 7 on a standard PC. There's plenty there for enterprises to get excited about.

Then, it could take the "Modern" (Metro) interface and give it a dedicated tablet experience without the unnecessary complexity of having to carry Desktop Mode for legacy apps and configuration. The biggest thing holding back Metro is all of that legacy code and the additional computing power that it requires (and the fact that Microsoft still uses it as a crutch to not put all of its settings in Metro). If you take that away, it will allow Microsoft and its hardware partners to build devices that are much more mobile, less power-hungry, simpler to use, and much less expensive. These would still be Windows tablets, and if they could easily connect to Exchange and Active Directory (unlike Windows RT) and include a light version of Microsoft Office then they would be highly competitive in the enterprise.

However, as much as this move could save Windows 8, it's highly unlikely that Microsoft will do it. Just last week on CNBC, Bill Gates stubbornly defended Microsoft's failed tablet strategy . He even went so far as to call iPad users "frustrated" because they can't type or create documents.

Now, I will happily admit that Gates is a much smarter guy than I am. He just happens to be wrong on this issue.

And while Microsoft has done some useful things in Windows 8, the act of shoe-horning it all together into one product and forcing the multi-touch UI on users has created a mess. Separating the desktop and tablet pieces into two different platforms is the first place Microsoft should start in cleaning up that mess. Doing that kind of reboot would demand a lot of courage in leadership, and it still wouldn't solve all of Windows 8's problems. But, it would give Microsoft two much more competitive product lines, and it would give Windows users and enterprises a much better set of product choices.

Join Discussion for: The one big fix that could save Windows 8