Love him or hate him, Woody Allen is a talented comedian, and as his 1973 movie Sleepershowed, he's also something of a futurologist.

The film depicts a future where people are catered for by every futuristic convenience, including driver-less cars that on a simple verbal command convey people to wherever they want to go.

According to Gartner analyst Thilo Koslowski, that future is closer than you might think.

Koslowski, who has headed up Gartner's automotive practice since 1999, said right now he wouldn't change his role for anything. Why? Because, as he sees it, after the recession years of the early part of the 21st century, the world is now entering what will be a crucial period in the history of many industries, including automotive.

"What we will be seeing [over the next 10 to 20 years] is the second coming of the automobile," he told ZDNet. 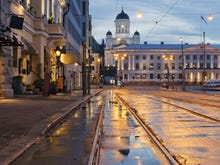 "Modern mobile technology and the car were made for each other. When you look at it, the attraction of the car had dimmed because of recessions and cuts but now, thanks to this marriage of mobility and automotive technology, it has got a new lease of life."

Mobile automotive technology will be ruled by three dominant players, said Koslowski. Will they be three car companies? "Not necessarily. Google or another technology company may well be major players in this space," he said.

Resurgence of the motor car

According to Koslowski, there will be a number of stages in the marriage of vehicles and technology. Self-driving vehicles, he said, will evolve in three stages: from automated, to autonomous, to driver-less vehicles. Autonomous and driver-less cars will lead to what he calls "significant societal and business disruptions".

Of course autonomous and driver-less vehicles will pose serious technological and legal challenges.

The potential good news is that autonomous vehicles could benefit nearly every organisation with commuting workers, retail sites, and physical deliveries, especially with regard to operational and staff productivity. Koslowski said that many industries and governments "will have to adapt to new supply chains and redefined industry boundaries".

He quoted research which shows that nearly two-fifths of US and German vehicle owners expressed interest in autonomous cars to the extent that they would even consider "giving up traditional vehicle ownership for having on-demand access to an autonomous vehicle wherever they are".

By 2030, autonomous vehicles will represent approximately a quarter of the passenger vehicle population in use in mature markets, Gartner said.

Personal automobiles in an age of smart mobility

The possibilities for automobiles are immense but also daunting, according to Koslowski. In a recent research paper, Crashing Industries and Our Societal Beliefs - The Real Implications of the Autonomous Vehicle, he outlined a possible future scenario for 2030.

"The renaissance of the personal automobile in the era of smart mobility and technology-centric vehicles is in full swing as the preferred choice for sustainable and intelligent transportation," he said. This will be "much to the disadvantage of public transit modes such as buses, trains, and planes".

By 2030, one in four consumers will have replaced vehicle ownership "with access to on-demand mobility services that send an empty automobile to pick up passengers at their rural homes".

This will ensure mobility for everyone regardless of age or mental and physical capabilities. Koslowski said "connected vehicles [will] monitor the state of all passengers at any time and drive them autonomously to the closest hospital in case of an emergency".

At the core of this change is not just the accumulation of hardware, software, and data communication technologies. Koslowski said: "The real impact of self-driving vehicles [is] the disruption of our existing personal and societal beliefs and the reorganisation of established business assumptions in many industries, including the financial services, retail and commerce, manufacturing, and services verticals".

Want a self-driving car? Be prepared for a long wait