The signal to noise crisis

The distraction of increasing volumes of digital noise is arguably creating 'information inflation', which is causing quality information to be harder to find, have a shorter lifecycle and quickly become devalued
Written by Oliver Marks, Contributor on Oct. 19, 2011 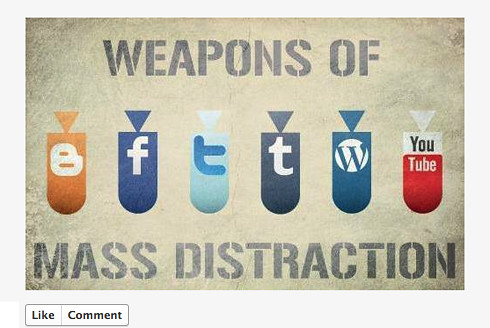 The above image ironically flew by on my Facebook feed earlier this week as I took a lunchtime distraction break from work....you're reading my blog so in a way I'm adding to the noise in your life, but since this post is about that the problems of that excess in your life I hope you'll find these ideas useful.

Wikipedia defines 'Signal-to-noise ratio' as a measure used in science and engineering that compares the level of a desired signal to the level of background noise. It is defined as the ratio of signal power to the noise power with a ratio higher than 1:1 indicating more signal than noise. Now that everyone and their grandmother is active on social networks our ability to find valuable quality 'signals' amongst all the noise is becoming harder and harder.

Brett & Kate McKay, on their excellent masculinity themed blog 'The Art of Manliness' posted a piece entitled 'How to Quit Mindlessly Surfing the Internet and Actually Get Stuff Done' which I took the bait for in their email newsletter and clicked through to read.  They provide some good basic tips on personal discipline and timed site blockers to avoid getting distracted, but it's very telling that we have now reached this point.

The sheer volume of signals and cues we receive today makes the subsequent challenge of burning through hours of content grazing, and in some cases interacting, reacting and opining online to the information we're consuming one of mankind's greatest inventions in terms of distraction.  Our information signal to noise ratio has hit a critical mass. Now that the bar to publishing to the web is virtually nonexistent, the volume of information we can so easily subscribe to, at no cost other than time and transportation costs (broadband, mobile) has arguably created rampant information inflation.

Our traditional understanding of financial inflation is a decrease in the real value of money over time; information inflation could be seen as a decrease in the value, ownership and creation of information. What happened to the music industry with the advent of MP3's - and more importantly the channels to download them via Napster is happening with information: everyone feels they have become the author or the creator of visual images by their act of sharing. I have no idea who created the graphic image above, which I shared on Facebook and several people commented on... I don't think I've ever met the Facebook acquaintance who posted it either; he in turn seems to have got it from someone in the Philippines.

This frantic sharing of information can quickly devalue it by familiarity - as we see the same cartoon, photograph, homily, joke or quote shared multiple times by various online friends its impact is diminished. The last person to share the micro meme is the fashion slow coach because the clique has moved on to the next thing.

The other aspect of all this is that "A lie gets halfway around the world before the truth has a chance to get its pants on" to quote Winston Churchill. Much like the retraction and factual corrections of the sensational news story printed on page seven of the newspaper several days after the front page splash, the world has moved on and no one cares. Print media may be dying but the veracity and way information is consumed and respected is also arguably in big trouble.

I've had my exposure to the sites in the graphic above and other shiny object sites on a pretty strict time diet for some time, but they still manage to consume a remarkable amount of time.  This is largely because filtering the quality signal from the background noise is increasingly hard - and once speech to text recognition matures a bit the bar for publishing will drop several more notches and volume will increase still more.

So what you say - social networking is for narcissistic navel gazing idiots: just don't go there.  The challenge is the increasingly interwoven world we live in. Creating a disciplined team who interact and share well together is absolutely key to business success, particularly since a company's people are usually its most expensive and valuable asset.

Getting groups of people working well together and putting information where it can be found by colleagues uses similar modern technologies and actions as the consumer internet, but the disciplines are totally different. The value of these new collaboration technologies continues to be hamstrung by the different needs of conflicting areas of the company.

As an example lots of companies now employ Twitter noisemakers who act as a form of digital stenographer, jamming the public channels with abbreviated messages exhorting you to click through to a link they've found, and of course urging you to follow their employer on the various social networks.

We've arguably hit a critical mass of failure with this particular distraction - there needs to be a new Dunbar's Number style tipping point formula for the point at which you abandon paying attention to the people you follow online because it's too time consuming as they get more verbose and less focused. No doubt an academic somewhere is working on this and will attempt to promote their book by promoting it through the mediums they are analyzing - they've probably 'started a conversation' to crowd source concepts and content already.

Inside companies you simply can't afford to let this happen, although there are many collaboration environments that have fallen silent simply because they got too busy and disorganized. Earlier this week Larry Dignan was perceptively cynical on ZD Net about The Gartner Symposium's annual reinventing IT crystal ball gazing 'disruption prediction' event. Obviously it's in Gartner's interests to be blowing up the world and reinventing it every few months in order to generate a new set of magic quadrants to sell, but the reality is far more prosaic.

There are layers of pre existing IT technologies and enterprise contracts in place: companies will Tetris in new layers of technology to meet business needs based on demand and integration realities. No one in their right mind wants to provision an internal environment at great expense to decrease productivity and confuse the workforce. Everyone is seeking ways to be more efficient but the tautology around various flavors of social, collaborative and marketing relationship activities continues to confuse. A movable online feast of fashionable ideas which doesn't slow down enough for anyone to put their money down and build out functionality has plagued various technology trends in the past: Knowledge Management, despite many fine ideas, never settled down into anything coherent enough at the end of the last century to endure.

'Information inflation' is a major problem that needs to be solved - it's entirely possible within the confines of a well organized business structure, and is arguably an imperative to define how employees and associates are expected to behave to achieve greater efficiency and thus enrich themselves. This task is made harder by the 'weapons of mass distraction' which are training individuals to consume shallow information ever faster and flip it for profit in some form or other.

The hamster wheel era of frantic Twitter trawling and spending hours reacting and interacting with your multiple channels is over - far more important is quality over quantity, foundation and focus. We will continue to be flattered and propositioned by marketers online but don't confuse that with your effective use of information.