What do you do when the tech industry is in a Web video pissing match that just won't end? If you're Google you open source the video codec acquired in the On2 Technologies deal and create a project called WebM. The WebM effort is so needed that Microsoft, Google, Mozilla and Opera all will support it.

WebM has bolted out of the starting gate with the backing of Mozilla, Opera, Google and 40 other Web players (Techmeme). Even Microsoft is going to support WebM. There's a software developer kit and it should get broad backing quickly. Bottom line: The industry needed an open, free video codec. Because all of the yapping over H.264 and Apple vs. Adobe's Flash just gets tired. Also: Microsoft to support VP8 video codec with Internet Explorer 9, after all?

Most of us just want the video on the Web to work every time on every device. All of the tech inside baseball over openness and standards is meaningless to the user. 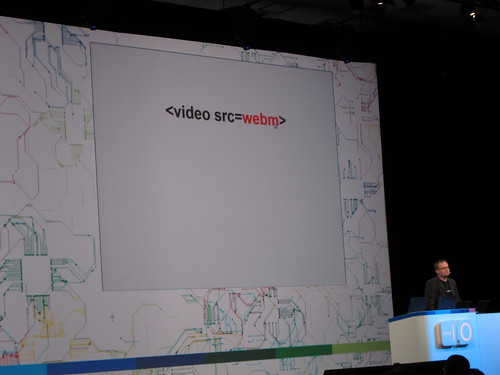 Simply put, the timing for WebM is pretty good. And Google has lined up a lot of partners. Aside from Mozilla and Google, AMD and Intel and Adobe are on board. Andrew Mager, live at Google I/O, notes that Kevin Lynch, CTO of Adobe, said the company will push out WebM to a billion people in a year.

Mozilla sums up the importance of WebM:

Until today, Theora was the only production-quality codec that was usable under terms appropriate for the open web. Now we can add another, in the form of VP8: providing better bandwidth efficiency than H.264, and designed to take advantage of hardware from mobile devices to powerful multicore desktop machines, it is a tremendous technology to have on the side of the open web. VP8 and WebM promise not only to commoditize state-of-the-art video quality, but also to form the basis of further advances in video for the web.

There are enough big guns backing WebM that is should become a de facto video standard quickly. However, there is one notable omission from the backers of WebM---Apple.

Related: A look at On2 Technologies and why Google wants it