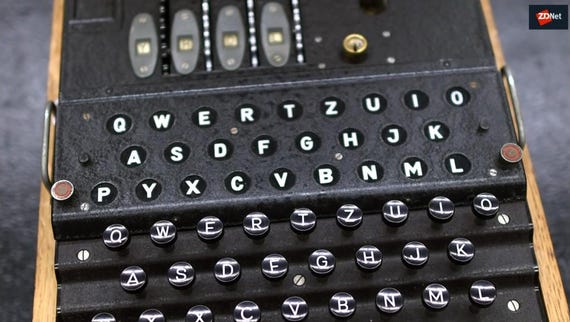 Bletchley Park was the home of British war-time codebreaking but it's not just a historical curiosity and still has relevance today; even some of Facebook's engineering breakthroughs can be traced all the way back to the super-secret birthplace of the Bombe machine.

Located in Milton Keynes, about 50 miles north of London, Bletchley Park was home to thousands of women and men who were part of the Government Code and Cypher School (GC&CS) during World War Two.

It was there that British mathematician Alan Turing and his team cracked the German Enigma code using the world's first special-purpose computer device. Called the Bombe, Turing's electro-mechanical machine was capable of imitating Enigma devices, and carried out sophisticated crypto-analysis of the cipher to eventually read out the encoded messages that the Germans were exchanging.

The technology effectively let the Allies listen in to their enemies' secret communications, and was instrumental in determining the outcome of the war.

The Bombe was promptly followed by the Colossus computer developed by Turing's colleague Tommy Flowers, Colossus broke the Germans' Lorenz code, a more complicated cipher that encoded sensitive communications, and eventually provided the Allies with intelligence regarding the disposition of enemy troops in Normandy for D-Day landings.

As critical as the work carried out at Bletchley Park was at the time, Turing and his team's legacy still very much permeates our modern world. The Bombe and Colossus, in fact, set the principles of many protocols that underpin today's internet security.

One example among many others is Facebook's program analysis tool, called Zoncolan, which was designed to examine the hundreds of millions of lines of code that the company runs every day, drawing conclusions without actually having to run the program, in a hunt for potentially dangerous vulnerabilities.

Gemma Silvers, engineering director at Facebook, told ZDNet: "When you look at the work that's been done to understand how to use program analysis to develop the security and safety of the applications we are running at Facebook – we can directly tie that to the work of Alan Turing."

"The improvements that have been driven by that team has helped us as a company to identify many bugs and vulnerabilities that in other cases would have taken many hours of human analysis. This is an example of program analysis and vulnerability detection with a strong connection to Bletchley Park."

Alan Turing is often referred to as "the father of modern computing", and with good reason. The work he carried out at Bletchley Park demonstrated the potential of mechanizing code-breaking at scale, and led to building the first large-scale digital computer. "That's a momentous piece of history upon which our industry is built," said Silvers.

The Bombe and Colossus soon inspired designs for general-purpose computers, for example thanks to an architecture put forward by one of Turing's acquaintances John von Neumann. The von Neumann architecture, which was built off the back of Turing's computational theory, included elements such as binary storage of data and instructions, which many general-purpose computers are based on today. Facebook has just announced a £1 million donation to the site to support operations over the next two years, as the COVID-19 pandemic places a strain on Bletchley Park's budget.

SEE: A student has rebuilt the machine that first cracked German Enigma codes

"There are parallels deeply embedded in the way that we look at computer science and applying AI," said Facebook's Silvers. "It's not an exaggeration to say that the problems we solve at Facebook would be fundamentally different without the work of Turing and his team at Bletchley."

Case in point: one of Facebook's researchers and UCL professor Peter O'Hearn built on the program analysis work of Turing to develop a new theory called separation logic. A brand-new way of reasoning about code, O'Hearn's theory has now been integrated into the platform's vulnerability detection program to dig out pre-production bugs. Separation logic was open-sourced in 2016 and is used by Amazon, Spotify, Uber, Mozilla and others.

O'Hearn's work is only one example of the modern world's huge debt to Turing and his team, and to the work that was carried out at Bletchley Park.

"A lot of the modern technology world as we know it is driven by some of the innovations at Bletchley Park in those times," said Silvers. And certainly, Turing's legacy in computer science has not yet reached its limits. From quantum computing to AI, the years to come are set to be jam-packed with revolutionary technologies – many of which will have indirectly originated in the Milton Keynes site.

Join Discussion for: The Turing legacy: How Facebook's developers...